The emergence of South Africa into an era of majority rule in 1994 was accompanied by a constitution that enshrined a wide range of equalities – not just racial equality, but gender equality and recognition of diverse sexual orientations. It was highly modern in its range, but all the same enshrined the position of traditional monarchs. Thus King Goodwill Zwelithini of the Zulu nation, who has died aged 72, was made part of a modern South Africa, while representing an old lineage and old practice.

The recognition in particular of the Zulu king was important in that the four years of negotiation, from Nelson Mandela’s release to the achievement of elections under universal franchise, were marked not just by black/white racial unease, but by Zulu/ANC communal violence in the province of KwaZulu-Natal, on South Africa’s Indian Ocean coast. Pogroms and slaughters by Zulu militants, and the reprisal attacks that followed, marked the unease of a process in which traditionally powerful communities sought not to be marginalised in the new dispensation. Recognition of the Zulu king, and the inclusion at a high level of Jacob Zuma, a Zulu himself, in the ANC cabinet – Thabo Mbeki appointed him deputy president in 1999 – helped to assuage these fears.

Zwelithini had an uneasy relationship with Mangosuthu Buthelezi, chief minister from 1976 of KwaZulu, when it consisted of 11 separate enclaves in the province of Natal, until under the 1994 constitution a unified KwaZulu-Natal was reincorporated into South Africa. That year Buthelezi became minister of home affairs in the national government, but still continued to hold a lot of regional power through remaining leader of the Inkatha Freedom party. Buthelezi’s long-simmering differences with Mandela meant that the king was sometimes placed in the position of being used by both sides. Nonetheless, Zwelithini retained huge prestige, influence and, indeed, political clout.

In 2018 Zuma, president since 2009, came under intense pressure from even his own ANC colleagues to resign the presidency, with scandals and their political pressures encircling him. His initial inclination to tough it out was dealt a blow by Zwelithini’s private but powerful advice to depart quietly and with dignity. The meeting between Zuma and Zwelithini in the first week of February 2018 presaged Zuma’s resignation a few days later. 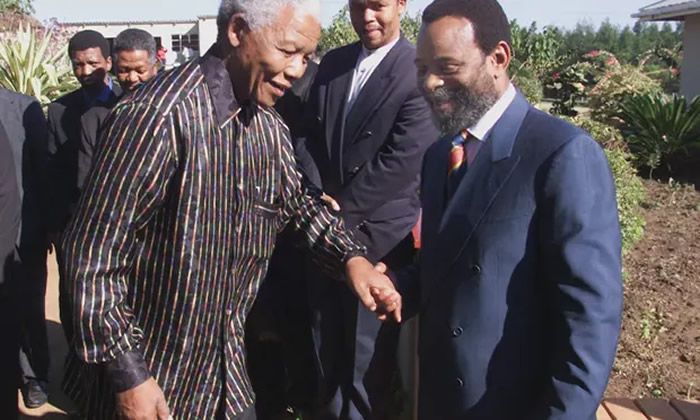 Zwelithini’s political sway derived historically from his lineage. He was a direct descendant of Cetshwayo, who fought against the British colonialists in 1879. The heroic military feats of the Zulu armies at that point in time, echoing the valour of Shaka Zulu in his conquests of the region, gave his throne an authority that could not be gainsaid as South Africa emerged from an apartheid seen as an extended colonial condition.

Born in Nongoma, KwaZulu, Zwelithini was the son of King Cyprian Bhekuzulu Nyangayezizwe kaSolomon and Queen Thomozile Jezangani kaNdwandwe. He succeeded on his father’s death in 1968, and reigned for more than 50 years, and his acumen throughout this time, notwithstanding occasional misjudgments, added to the reverence accorded him.

Those misjudgments included his 2015 comments urging foreigners to return home. Xenophobic violence followed. The king then disowned his own statements, saying they were read out of context, but they did show the power of his words. Those words were almost always fairly straightforward. His style of speech was direct and not always comfortable listening for the ANC as he criticised the party’s track record in government.

And those words resonated beyond the Zulu nation. As the husband of six wives, he had influence also in the Xhosa and Swazi nations. But it was his general demeanour that earned him respect universally. He saw himself as a custodian of traditional culture, reviving practices such as the reed dance, which celebrates the virtues of female virginity. But he also was active in raising awareness of HIV – without, all the same, recommending the virtues of male abstinence and virginity. Even so, his influence on the HIV debate, famously skewered by a period of HIV-denial on the part of the president, Thabo Mbeki, was critical. KwaZulu-Natal had a very large infection rate, and the intervention of the king was critical in its reduction.

The Zulu nation numbers 11 million. It constitutes about 18% of the South African population. This makes it a key variable in electoral voting stakes. In the days of apartheid, US support for South Africa was premised on a determination to preserve naval hegemony in the region, making the KwaZulu-Natal coastline strategically important. The region is also one of great natural beauty, so it is a key feature of South African tourist drives. The king was very active in portraying his region as a desirable destination. Overall, the traditional king played a modern role and did so with acuity and dignity.

Zwelithini is survived by six wives and 28 children. It is not immediately clear as to whom the succession might pass.