My friend John Graham, who has died aged 93, was one of the key figures behind the design of Harlow new town in Essex. He was the architect responsible for the realisation of the Harvey Centre shopping complex, in 1980, as well as Adams House retail and office block in Market Square (and its landmark clock), completed around 1956 as one of the first buildings in the town centre. He later played a significant role in establishing the Gibberd Gallery, which opened in 2004.

Born in Manchester, John was the son of Mabel (nee Hyde) and Gilbert Graham, a chartered accountant, and went to Stretford grammar school. Following service with the Royal Engineers from 1945 to 1948 in the army of occupation in Germany, he obtained a first-class degree in architecture from Manchester University and in 1952 joined the Harlow Development Corporation.

John was awarded the Rome scholarship in 1953 and spent his time in Italy making measured drawings of Roman temples that would remain touchstones throughout his career. 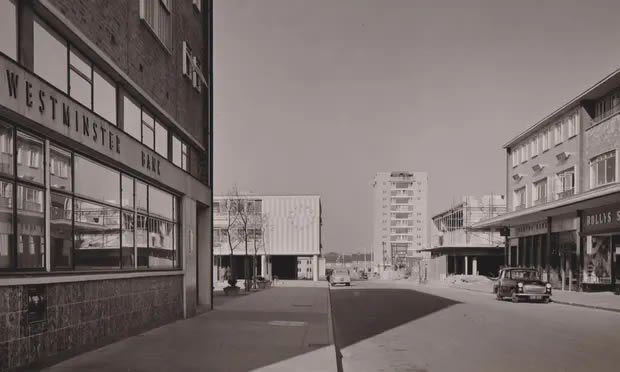 The Market Square in Harlow in the late 1950s. Photograph: Harlow Museum

In 1956 he joined the Harlow office of Frederick Gibberd and Partners, Gibberd having drawn up the masterplan for Harlow in 1947. John became a partner in 1965 and designed the mosaic-clad rooftop viewing room of the original Harlow town hall (built 1959 and influenced by the Roman vault forms John had studied) and the UK’s first purpose-built indoor community sports centre, as well as the Harvey Centre and Adams House. His sensitive additions to Old Harlow high street in the early 1970s won a European Council Architecture Heritage award. The clock on the Adams House, Harlow, Essex. John Graham was the architect in charge of the realisation of the building, completed c1956. Photograph: Alex James Bruce

After Gibberd’s Harlow office closed in 1983, John retired and devoted himself to art. He established a gallery in his former office space and became a trustee of Harlow Art Trust, where we worked together. For more than 30 years he helped grow the collection of sculpture, which includes works by Henry Moore, Barbara Hepworth and Elisabeth Frink, earning Harlow the title of Sculpture Town.

Perhaps John’s lasting legacy will be the establishment of the Gibberd Gallery. Gibberd had bequeathed a watercolour collection to the town. When a new civic centre was planned, John drove the idea of a gallery space in the building for the collection to be on permanent display and crucially to hold public exhibitions alongside. Today the gallery hosts community shows, an artist in residence, school workshops and contemporary exhibitions.

John represented values that evolved after the two world wars: a pride in civic duty – if we all work together, we can make things better for everyone – and a belief that culture (art, music, football, religion or knitting) is essential for a good life. Such values underpinned the creation of new towns such as Harlow.

From 1960 until the end of his life, John lived in a prefabricated house on the edge of Harlow, in the shade of an ancient oak tree. He married Britt Båckstrom, a Swedish singer, in 1954; she died in 2005.