Irmgard Furchner, accused of complicity in the murder of over 10,000 people in occupied Poland, apprehended after failing to show for trial A 96-year-old former typist at a Nazi concentration camp was caught hours after going on the run before she was due to stand trial in Germany for her alleged role in the deaths of thousands of people.

Irmgard Furchner is accused of being an accessory to the murder of 11,412 people at the Stutthof concentration camp in what is now Poland.

She worked as a typist and stenographer for the camp commandant between 1943 and 1945 but claims she knew nothing about the systematic killing there.

The judge declared Furchner a “fugitive” and issued a warrant for her arrest after she went missing shortly before the trial was set to commence.

She left the nursing home where she lives near Hamburg by taxi and was believed to have been headed for a local metro station, a spokesman for the court said.

Her lawyer was present in court but did not comment publicly on her whereabouts. Under German law she could not be tried in absentia and must be present in court when the charges are read out against her. German lawmakers stand next to an empty seat of the accused at the courtroom, prior to a trial against a 96-year-old former secretary for the SS commander of the Stutthof concentration camp in Poland Credit: Shutterstock

“The accused is making a mockery of the judiciary with her behavior. Apparently she does not feel bound by the law,” said Onur Özata, a lawyer representing survivors of the camp.

“The authorities must now do everything possible to get hold of the concentration camp secretary. Anything else would be unbearable for the survivors.”

About 65,000 people are believed to have been systematically murdered at Stutthof, around 28,000 of them Jewish. Several thousand died in the camp’s gas chambers. Others were clubbed to death, drowned in mud, killed by lethal injection, shot or worked to death.

The majority died of the inhuman conditions at the camp, which suffered a series of typhus epidemics. Those deemed too weak to work after recovering were sent to the gas chambers. There are claims the bodies of some of the dead were used to make human soap.

Ms Furchner was 18 when she started working at Stutthof in 1943. She worked in an office complex outside the main camp and claims she only learned of the murders that took place behind its walls after the end of the war.

She testified in hearings against senior figures in 1954 and 1962 that she was unaware there were gas chambers at the camp. She said she knew some “executions” took place, but claimed she believed the victims had committed some crime.

The prosecution alleges her work means she would have been aware of the killings. She testified at the same hearings that the camp commandant dictated radio messages to her daily and all correspondence with the SS command crossed her desk.

“My client worked in the midst of SS men who were experienced in violence - however, does that mean she shared their state of knowledge? That is not necessarily obvious,” Wolf Molkentin, her lawyer, told Spiegel magazine. 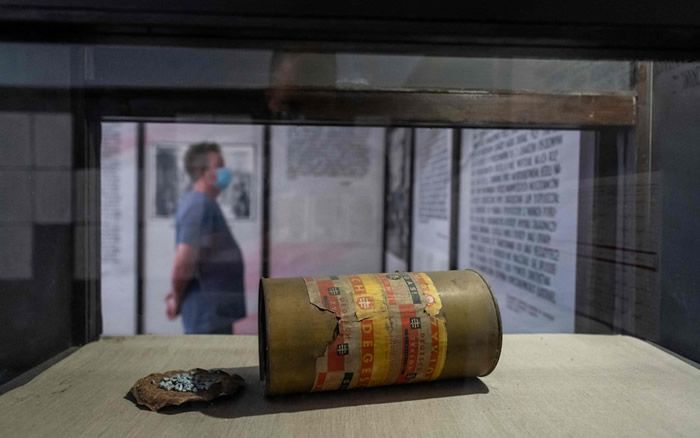 A file photo taken on July 21, 2020 shows a Zyklon-B gas canister on display in the museum in the former Stutthof death camp , in Sztutowo, Poland Credit: AFP

For many years German courts held that only the most senior Nazi leaders could be held responsible for the worst crimes of the Holocaust.

That changed in 2011 and prosecutors have since been racing to bring surviving perpetrators to justice while there is still time.

Last year, Bruno Dey, a 93-year-old former camp guard at Stutthof, was found guilty of being an accessory to 5,232 murders and handed a two-year suspended sentence.

Most famously, Oskar Gröning, an SS accountant known as the “book-keeper of Auschwitz”, was found guilty as an accessory to the murder of 300,000 people at Auschwitz and sentenced to four years in prison in 2015, but died before he could serve his sentence.

The same year a 91-year-old woman named only as Helga M was charged with 260,000 counts of accessory to murder because she had worked as a radio operator at Auschwitz. She was later ruled unfit to stand trial.