Roger Hunt, who has died aged 83, was a member of that exclusive club of 11 England players with a World Cup winners' medal and also, quite simply, one of the greatest players ever to represent Liverpool. Liverpool supporters labelled him 'Sir Roger Hunt' because of his gentlemanly approach and modest demeanour, allied to his consummate goalscoring expertise that saw him score 285 times in 492 appearances, to lie only second behind Ian Rush in the club's goalscoring records.

Indeed, such was Hunt's reputation for sportsmanship and honesty that when he turned away celebrating a goal after Geoff Hurst's controversial shot hit the bar and bounced down in the 1966 World Cup win over West Germany at Wembley, his team-mates believed this confirmed its legitimacy.

Hunt had a reputation as the workhorse of England's World Cup win - he played with his shirt sleeves rolled up, almost as a symbol of his willingness and desire for football's dirty work - but this criminally underrates a truly outstanding striker whose brilliance and consistency made him a beloved and iconic figure for club and country.

Lancashire-born Hunt joined Liverpool from Stockton Heath in July 1958, signed by then manager Phil Taylor, celebrating his debut with a goal against Scunthorpe United in September 1959.

When Bill Shankly arrived later that year he blew through Liverpool like a hurricane, clearing out players he believed simply did not meet the standards he demanded. Hunt, top right, pictured with Liverpool team-mates on the train to London before the 1965 FA Cup final, in which he scored to help the Reds beat Leeds and lift the trophy for the first time

Hunt remained and became the main spearhead in the great Anfield revolution of the 1960s that saw him play a central role in leading Liverpool out of the old Second Division and into the top flight.

He formed a lethal strike partnership with Ian St John after he arrived from Motherwell, as Liverpool won the First Division title in 1963-64 and 1965-66, as well as the FA Cup for the first time in 1965, when Hunt and St John scored in the 2-1 win over Leeds United at Wembley.

Hunt also made history by scoring the first goal shown on Match Of The Day - BBC2's new weekly football highlights programme - when it made its debut on 22 August 1964, scoring a looping volley at The Kop end as Liverpool beat Arsenal 3-2.

Hunt's career hit its peak in 1966 when, after scoring 29 goals in 37 appearances as Liverpool won the title once more, he was a key component of Sir Alf Ramsey's World Cup winning side.

He won the first of 34 England caps in a friendly against Austria at Wembley in April 1962 and maintained an impressive goalscoring record of 18 before making his final appearance in a 1-1 draw against Romania at Wembley in January 1969.

It was, however, those few weeks in the summer of 66 that ensured Hunt remains in the history books for England as well as Liverpool.

Ramsey liked his players to mix sweat with skill and Hunt could have been the template, a tireless worker as well as a striker of the highest standard. He scored three goals in England's group games, twice against France and once against Mexico, and even when there was a debate around whether Jimmy Greaves would return to the side after sustaining an injury, Hunt's place was never in question.

The final choice lay between Greaves and Geoff Hurst. Greaves was left heartbroken and Hurst scored a hat-trick in the final and English football enjoyed its greatest day.

If there was a disappointment in Hunt's Liverpool career, it was the failure to win a European trophy with Shankly's outstanding team.

In 1965, Liverpool lost in the semi-final of the European Cup to Inter Milan, a 3-0 second leg loss at the San Siro after a 3-1 win at Anfield - forever a cause of anguish for Shankly and his players as they were the victims of a series of dubious decisions.

There was further disappointment for Hunt and Liverpool a year later when they lost 2-1 to Borussia Dortmund in the 1966 European Cup Winners' Cup Final after he had scored the equaliser.

Hunt continued to deliver for Liverpool on a regular basis, still remaining the club's all-time record league scorer with 244 goals.

His time at Liverpool came to an end as Shankly decided to rebuild once more at the end of the decade, a very rare and uncharacteristic show of dissent from one of the game's most dignified statesmen coming when he tore off his Liverpool shirt and threw it to the ground in disgust when he was substituted for Bobby Graham in an FA Cup fifth round defeat by Leicester City at Anfield in March 1969. 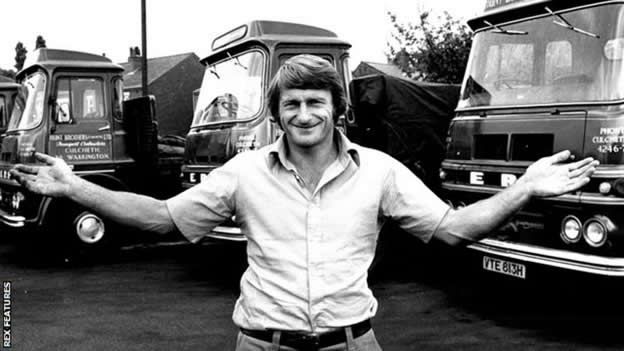 Hunt would go on to help run his family's haulage company

The Kop's response? Loud chants of "We Want Roger" as Liverpool went on to lose 1-0.

Hunt left Liverpool for Bolton Wanderers in December 1969 but has remained in the hearts of Liverpool fans forever after eight successive seasons as the club's leading scorer.

When Liverpool staged a testimonial match for Hunt in April 1972, Anfield was packed to its then capacity of 56,000 hours before kick-off - with thousands locked outside - for a game against an England XI containing his World Cup winning colleagues George Cohen, Bobby Moore, Nobby Stiles, Hurst and Martin Peters.

Hunt was belatedly awarded an MBE in 2000 for his deeds in 1966, but he had possessed his own 'knighthood' from Liverpool's fans for many years.

Away from the game, Hunt helped to run the family's successful haulage business, with the "Hunt Brothers" lorries a familiar sight around the north-west and beyond.

He rarely courted the spotlight but when he did, he was always remembered as a humble, modest man who never traded on his historic achievements for Liverpool and England, a true gentleman and a great striker.