Arizona Sen. Krysten Sinema has drawn attention for her support of the legislative filibuster. REUTERS/Erin Scott

Since being elected to the Senate in 2018, Sen. Kyrsten Sinema has drawn as much attention for her eye-catching outfits and hairdos as her politics.

But as one of the architects of the $1.2 trillion infrastructure deal announced by President Biden Thursday — as well as one of two moderate Democrats publicly committed to preserving the Senate’s legislative filibuster — the Arizona Democrat has made clear she’s not to be taken lightly or underestimated.

Born in 1976 to a Mormon family in Arizona and raised by her mother and stepfather in Florida, Sinema became a social worker after graduating from Brigham Young University and cut her teeth in Arizona activist politics. During the 2000 presidential campaign, she was the Green Party’s local spokesperson and her views during this period would be familiar to supporters of Sen. Bernie Sanders (I-Vt.).

A 2018 Wall Street Journal story recounted a letter from Sinema that was published by the Arizona Republic newspaper in 2002. It read, in part: “Until the average American realizes that capitalism damages her livelihood while augmenting the livelihoods of the wealthy, the Almighty Dollar will continue to rule.” Sen. Sinema with other senators and President Joe Biden after reaching an agreement on the infrastructure package on June 24, 2021. Photo by Kevin Dietsch/Getty Images

Sinema also organized rallies and protests opposing the wars in Iraq and Afghanistan, telling a local radio host at the time that she welcomed participation from “Libertarians, Democrats, Republicans, Greens, independents, anarchists, socialists, communists, whoever wants to come. They’re all welcome.”

At a February 2003 rally organized by a group Sinema co-founded, fliers were distributed calling for an end to “U.S. terror in Iraq and the Middle East.” The flier included a drawing of three skeletons — one dressed as a soldier, another dressed in a top hat holding a dollar bill and another dressed in a suit.

When CNN reported on the fliers during Sinema’s 2018 Senate race, her campaign claimed Sinema did not design or approve the fliers.

Sinema joined the Democratic Party in 2004 and experienced her first electoral success that same year, winning a seat in Arizona’s House of Representatives. Her activist work continued, as she organized pro-immigrant marches and campaigned to defeat a proposed amendment to the Arizona Constitution that would have outlawed same-sex marriage.

Sinema is openly bisexual, but does not like to discuss her orientation, particularly in relation to her political views. “I don’t have a story to tell,” she told an interviewer in 2013. “I don’t think this is relevant or significant. I’m confused when these questions come up. I’m not a pioneer. I’m just a regular person who works hard. Nor am I a poster child. I’m not forging away or pioneering. I don’t understand what the mystique is.”

After three terms in the Arizona House, Sinema was elected to the Arizona Senate in 2010, then resigned her seat after less than a year in office to run for Congress and represent Arizona’s new 9th District. She won again, narrowly defeating Republican nominee Vernon Parker.

Arriving on Capitol Hill, Sinema showed her moderate side, joining both the conservative Democrat Blue Dog Coalition and the bipartisan Problem Solvers Caucus. The website FiveThirtyEight found that over Sinema’s last two years in the House, which coincided with Donald Trump’s first two years as president, she voted with his position 62.6 percent of the time. Undeterred by that record, then-Senate Minority Leader Chuck Schumer (D-NY) recruited Sinema to run against Republican Martha McSally for the seat being vacated by the retiring Jeff Flake. Sinema again tacked her message to appeal to moderate voters, at one point telling USA Today that Trump was “not a thing” in the race and “not a part of what I think my constituents are worried about or think about.”

That strategy paid off, as Sinema became the first Democrat to represent Arizona in the Senate since 1995. In her first two years as a senator, FiveThirtyEight found she voted with Trump’s position just 26.2 percent of the time, but did back the 45th president on issues like the USMCA trade agreement, the nomination of William Barr to be attorney general and opposing the repeal of an Environmental Protection Agency emissions rule.

“Everyone knows that I am very independent-minded,” Sinema told Politico in October 2019. “And that it’s not super useful to try and convince me otherwise.” 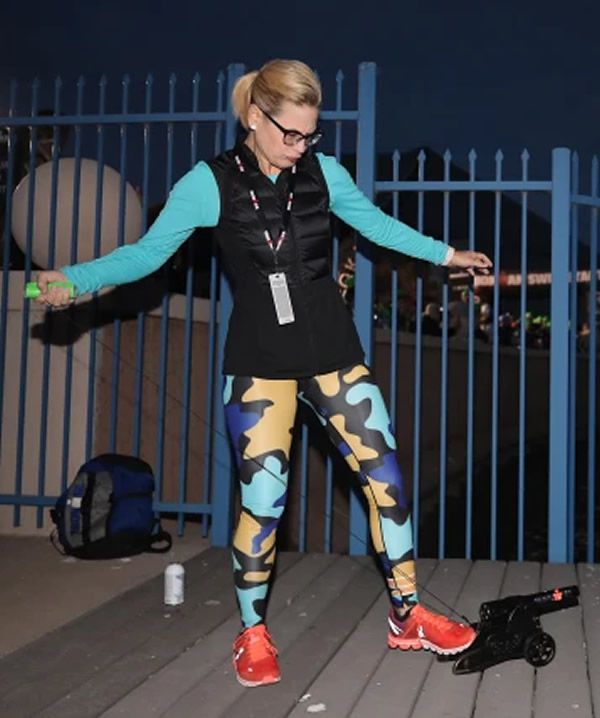 Sen. Sinema wearing one of her signature flashy outfits.

That independent streak extends to fashion, such as when Sinema presided over the Senate wearing a hot-pink shirt bearing the words “Dangerous Creature“, or when she wore a zebra-striped coat and a purple wig to fellow Arizona Sen. Mark Kelly’s swearing-in. At the White House Thursday, Sinema stood out in a sea of blue and gray suits by wearing a sleeveless red dress that concealed a crutch she’s using to help recover from a broken foot she sustained running a marathon.

In recent months, Sinema has become notorious for standing firm against the left wing of the Democratic Party. In March, she gave a dramatic thumbs-down disapproval to Sanders’ proposal to make a $15 national minimum wage part of a $1.9 trillion coronavirus relief package, earning a rebuke from Rep. Alexandria Ocasio-Cortez, among others.

But Sinema and Manchin’s public opposition to removing the legislative filibuster and enabling any legislation to pass the Senate with a mere 51 votes has made them the two most-scrutinized lawmakers in Washington, even causing President Biden to incorrectly claim the two vote more with the GOP’s position than with his own. Sinema with Utah Republican Sen. Mitt Romney at a bipartisan infrastructure meeting at the White House on June 8, 2021. Getty Images

In a Washington Post op-ed published this week, Sinema emphasized her support for the filibuster, writing: “If anyone expected me to reverse my position because my party now controls the Senate, they should know that my approach to legislating in Congress is the same whether in the minority or majority.

“My support for retaining the 60-vote threshold is not based on the importance of any particular policy. It is based on what is best for our democracy,” she wrote. “The filibuster compels moderation and helps protect the country from wild swings between opposing policy poles … I do not accept a new standard by which important legislation can only pass on party-line votes”.

Sinema concluded: “Instability, partisanship and tribalism continue to infect our politics. The solution, however, is not to continue weakening our democracy’s guardrails. If we eliminate the Senate’s 60-vote threshold, we will lose much more than we gain.”