A view of the Drobitsky Yar Holocaust memorial complex on the eastern outskirts of Kharkiv, Ukraine, after it was hit with Russian missiles, Mar. 27, 2022. (Sergey Bobok/ AFP via Getty Images)

HAIFA, Israel (JTA) — As a Holocaust survivor from Ukraine, Yaakov Zelikovich is heartbroken over the human suffering in his country of birth, which is under assault by Russia.

“As a Jew and as a person, I feel bad for the children, the women, the anguish,” Zelikovich, an 83-year old grandfather of four.

And yet, even though he was born and raised in Ukraine and speaks Ukrainian well, he has been living in Israel since 1974, and feels little solidarity with his native land.

“On the national level, I think that it’s their problem, not mine. Believe me, it’s certainly not my problem,” said Zelikovich, citing widespread collaboration by Ukrainians with the Nazis during World War II as the reason for his indifference.

Zelikovich’s antagonism is typical of the ambivalence felt by some Holocaust survivors and others as both Ukraine and Russia consistently reference the Holocaust to rally support for their respective sides during the current conflict. Zelikovich, who lives in Karmiel, spoke with the Jewish Telegraphic Agency on Thursday, Yom Hashoah — the Jewish day of commemoration for the victims of Holocaust, when much of the ambivalence has risen to the surface.

Ukraine’s checkered record during the Holocaust, the prevalence of Nazi collaboration there and the glorification of collaborators today make for a complicated and often conflicted attitude toward that country by Holocaust survivors from the country and their descendants.

To Ida Rashkovich, an 86-year-old survivor from the Ukrainian city of Vynnitsa who now lives in Holon, Israel, this is not some abstract discussion about history and geopolitics. Several of her relatives were murdered because of local Ukrainian collaborators, she told JTA.

“Of course I had relatives killed by Ukrainians. But other Ukrainians also saved Jews. It’s a very mixed picture,” she said, adding that she strongly opposes Russian President Vladimir Putin’s “monstrous actions.”

Zelikovich recalls being marched as a child to a mass grave in the woods flanked by Ukrainians police officers, who under the auspices of the Nazi-aligned Romanian occupiers, rounded up the Jews of his town of Tomashpil.

At a certain point, his grandmother, who was marching alongside him, picked him up and carried him toward their would-be execution place. But the Romanians decided to spare adults with children, which is why he and his grandmother, Ida Dolbur, were allowed to return home.

Having narrowly escaped being executed along with more than 200 victims who died that day outside Tomashpil, Zelikovsky’s family went into hiding and survived. Dolbur died in 1953.

“It’s especially hurtful that the leaders of the collaborationists are now celebrated as heroes in Ukraine,” he said.

Ukraine’s fight against the Russian aggressors and the leadership of Ukraine’s president, Vlodymyr Zelensky, who is Jewish, have inspired the West, and undermined Putin’s propaganda describing his war goals as the “denazification” of Ukraine. Before the war, tens of thousands of Jews lived in Ukraine, enjoying a network of synagogues and schools and joining their non-Jewish neighbors in denouncing and resisting the Russian forces.

“Over 30 years we built an amazing community,” Avraham Wolff, a Chabad rabbi in Odessa, told The Washington Post in March. “And it’s a shame that it has come to this.”

Still, over the past decade, Ukrainian society has seen mainstream attempts to glorify World War II collaborators like Stepan Bandera and Roman Shukhevych — Ukrainian nationalists who at least for a time worked with the Nazis against the dreaded Soviet Union. Their troops are believed to have murdered thousands of Jews during the Holocaust.

State-sponsored honors to Nazi collaborators are a new development in Ukraine, where about 15% of the population are ethnic Russians. The phenomenon grew as Ukrainian nationalism consolidated itself politically, and exploded following the 2014 invasion of Ukraine by Russia and Russia’s annexation of Crimea.

In 2017, the city of Lviv held a festival in Shukhevych’s honor. The following year, the same city sponsored a parade in which participants marched in the uniform of a Nazi-led unit of Ukrainian conscripts: the 14th Waffen Grenadier Division of the SS, or the 1st Galician.

In parallel, historical figures like Bohdan Khmelnytsky, the 17th-century Cossak leader whose army killed countless Jews, are also being celebrated. A gold-tinted statue of Khmelnitsky is on display in a central avenue of Kyiv named for him. The Ukrainian National Guard also includes a volunteer unit called the Azov Battalion, which according to its commanders includes a significant portion of neo-Nazis, and whose logo is a neo-Nazi hate symbol.

Zelensky did not help matters when he compared the Russian invasion to the Holocaust, at a time when the fighting was brutal but not genocidal under accepted definitions of the term.

In a speech to Israeli lawmakers last month, Zelensky defended the comparison. “I have the right to this parallel and to this comparison,” he said, prompting protests by Israeli officials.

References to the Holocaust, on both sides, make the fight against its distortion “an uphill battle,” said Mark Weitzman, chief operating officer of the World Jewish Restitution Organization and one of the initiators of the definition of Holocaust distortion by the International Holocaust Remembrance Alliance — a forum of dozens of countries.

There are some Israeli Holocaust survivors from Ukraine who have felt patriotic solidarity with Ukraine during the war.

“I grew up there, I went to school there, I went to university there. It’s impossible to stay indifferent,” said Avraham Sharnopolsky, a 91-year-old Holocaust survivor from the town of Ilyintsy in Ukraine’s west, and later Donetsk in the east. “I feel a lot of solidarity with Ukraine as a country and with Ukrainians as a people, even though Ukrainians have killed countless Jews.”

The pogroms and collaboration, he said, “don’t erase centuries of coexistence. It’s very complex and tragic at times but that doesn’t mean I’m not Ukrainian,” said Sharnopolsky, who immigrated to Israel in 1995 and lives in Jerusalem. 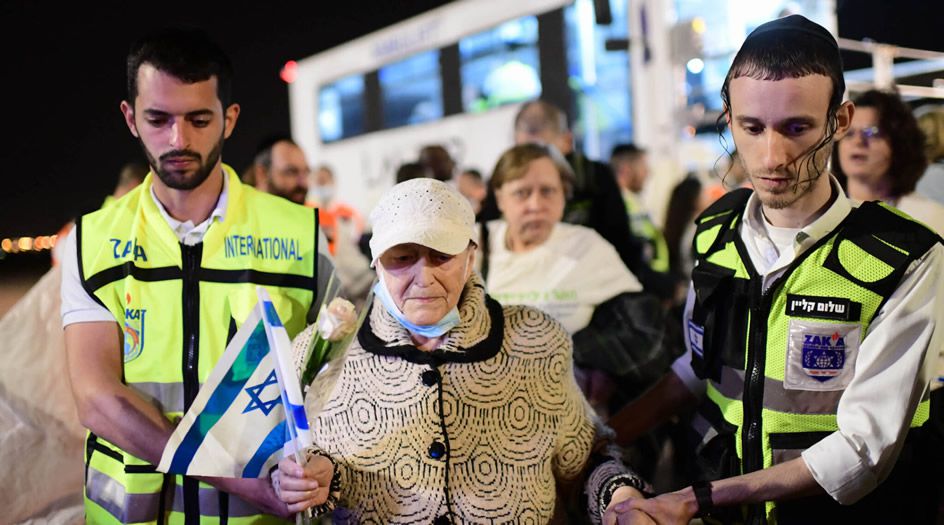 Sharnopolsky also said that comparisons with the Holocaust are “inevitable” in light of the scale of devestation by Russia of some Ukrainian cities.

Yet in Israel and elsewhere, the back and forth featuring Holocaust comparisons, as well as bitter memories of antisemitic persecution by Ukrainians and Russians during the 20th century, has left some Holocaust survivors from Ukraine feeling indifferent.

“The Ukrainian people who are suffering have done nothing wrong and I feel sorry for them,” one Israeli Holocaust survivor from Donetsk, Boris Shatanov, told JTA. “But the Ukrainian people as an entity has none of my sympathies.”

Shatanov, who is 91 and immigrated to Israel in 1990, said his cousin was raped and murdered by a “gang of drunken Ukrainians even before the Germans ever got to her village” in 1941.

“As for the Russians, I’m not too favorable on them either,” added Shatanov, who said he was not accepted to university because he was Jewish under communism, and had to travel to Kazan, a city 500 miles east of Moscow, to study to be an engineer there.

“I am a Jew, I’m an Israeli, I’m a Holocaust survivor and I was done with their wars a long time ago,” Shatanov said.