Admiral Sir John Bush, who has died aged 98, was one of only a score of officers to win three Distinguished Service Crosses in the Second World War, and was a highly effective Cold War warrior. 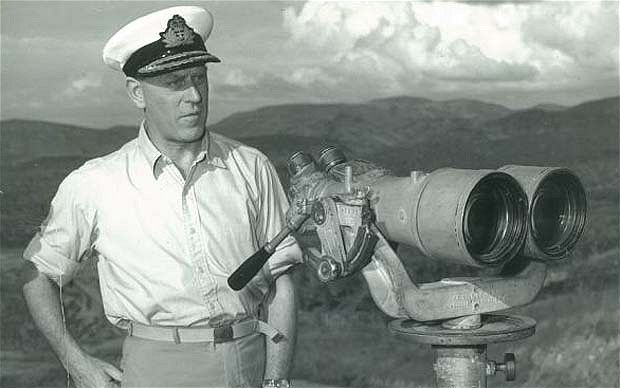 The outbreak of hostilities found Bush as first lieutenant of the destroyer Nubian. During the short Norwegian campaign of April and May 1940, the ship ferried troops ashore day and night, also providing anti-aircraft cover and escorting merchant ships in and out of the fjords.

By the end of May Nubian had been incorporated into the 14th Destroyer Flotilla, part of Admiral Cunningham’s fleet based at Alexandria. During the battle of Calabria, on July 9 1940, she helped the British Mediterranean Fleet establish ascendancy over the Italian Navy by driving it back to within sight of its own shores.

Next, while based in Malta, when the island was under heavy bombardment from the air, Nubian made several sorties against enemy shipping, and during the battle of Taranto on November 12/13 1940 was part of an flotilla which intercepted a convoy of four merchant ships and sank or badly damaged every ship. Bush was awarded the first of his DSCs for coolness, skill and enterprise.

At the next British clash with the Italian fleet, at the battle of Cape Matapan fought between March 27-29 1941, Nubian was detached to provide a visual signal link between British battleships and cruisers. She then delivered the coup de grace to the Italian cruiser Pola, which had been badly damaged by Cunningham’s battleships.

During the withdrawal from Crete Nubian’s luck ran out: on May 26 1941 she was struck by a bomb which blew off her stern and rudder. However her propellers were undamaged and, steering by altering their revolutions, Nubian was able to return to Alexandria at 22 knots. Bush was awarded the first bar to his DSC for gallantry, leadership and skill.

In 1942, at the age of 27, Bush was given command of the new-built Hunt class destroyer Belvoir, steaming her to the Mediterranean via South Africa and taking part in the capture of Madagascar landings en route. During the next two years Bush was mentioned in despatches for work in escorting Mediterranean convoys and took part in the landings on Sicily, Italy and the south of France. He also took part in operations in 1944 to prevent the capture of the Dodecanese by the Germans, for which he was awarded a second bar to his DSC.

John Fitzroy Duyland Bush, known as “The Burning Bush” as much for his character as the colour of his hair, was born on November 1 1914, a descendant of the first Bishop of Bristol. Educated at Clifton College, in 1933 he joined the training ship Frobisher as a special entry naval cadet.

He served as a midshipman in the cruisers Cornwall and Cumberland and the destroyer Delight, and as junior lieutenant in the destroyers Stronghold, Beagle and Wrestler until he joined the new, fast, powerful Tribal class destroyer Nubian in November 1938. After winning his third DSC, Bush returned to Britain to take command of the destroyer Zephyr on Arctic convoy duties, and at war’s end was given command of the new destroyer Chevron.

Postwar Bush commanded Chevron in the Mediterranean and was promoted to commander in 1946 at the young age of 32. After two years in the plans division at the Admiralty, he became a student at the US Armed Forces Staff College in Norfolk, Virginia. From 1949 to 1951 he commanded the Battle Class destroyer Cadiz in the Home Fleet, before a Nato staff appointment when he helped plan Exercise Mainbrace, the first large-scale Nato maritime exercise of the Cold War.

He was deputy secretary of the Chiefs of Staff Committee for two years; captain 6th Frigate Squadron; and captain of the frigate Undine during the landings at Suez. In 1960, he was director of naval plans in the Ministry of Defence when he was promoted rear admiral. Flying his flag in the cruiser Blake he attended the independence ceremonies in 1962 of Jamaica and Trinidad and Tobago

In 1963 Bush was appointed Commander British Naval Staff, Washington, when he travelled extensively throughout the United States and was the first British admiral to visit the South Pole . Promoted vice-admiral in April 1965, he was appointed vice-chief of the Naval Staff at the particularly crucial moment, when the decision was taken to withdraw British forces from east of Suez . He played a significant part in designing “the future fleet” and in saving the Royal Marines, who were threatened with disbandment.

In January 1967 Bush led a British delegation to South Africa to renegotiate the Simonstown Agreement, giving Britain access to the base following the drawdown of British forces in the South Atlantic. Promoted admiral in October 1967, Bush was appointed Commander-in-Chief Western Fleet and Commander- in-Chief Eastern Atlantic, one of the major Nato sea area commands.

On May 16 1969 he commanded the 20th anniversary review of Nato naval forces by the Queen at Spithead which involved 61 ships from 12 navies. In Torbay on July 28 he commanded a British fleet of 39 warships, when the Queen presented new colours.

In retirement he gave great energy to the old boys’ association and later the governing body of Clifton College. He was a member of East Hampshire district council, and a vice-president of the Eighth Army Association. At East Tisted in Hampshire, he designed, built and maintained a beautiful garden.

John Bush married Ruth Kennedy, daughter of Paymaster Captain HK Horsey, in 1938. She predeceased him in March this year after 74 years of marriage. He is survived by three sons and two daughters.