My friend Audrey Brain, who has died aged 93, taught piano and aural training for more than 70 years. Cheerful, good-humoured and generous, she always showed a genuine interest in what other people were doing. 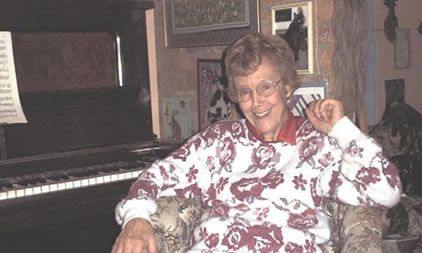 She was born Audrey Wheeler in London and was educated at Goldsmiths, University of London, London School of Dalcroze Eurhythmics and the Royal Academy of Music. After entering for the Licentiate of the Royal Academy of Music (LRAM) she soon discovered her piano professor was hopeless. She recalled: "He used to read his newspaper and then he would say, 'Very nice dear, very nice … Shall we go and get a coffee?' And we'd go down Marylebone Lane and drink coffee in a cafe."

Six weeks before the LRAM exams, she consulted one of the music professors at the academy, and he recommended Gladys Puttick, a wonderful teacher who Audrey described as "a star, not orthodox but very good". Three lessons a week took place at practice studios in London above the Blüthner piano centre or at a studio above the Wigmore Hall.

After passing her LRAM, she taught piano and aural training at North London Collegiate school from 1939 to 1975, taking time out only to have her children. She also taught at schools in Edgware, Uxbridge, Purley and Kenton, Harrow, where she had a pipe band. From 1944 to 1947 she taught at Trinity College of Music. She retired in 1983.

In 1944, she had married Leonard Brain, who was then first oboe in the RAF Symphony Orchestra. Leonard was the son of Aubrey Brain, first horn of the BBC Symphony Orchestra, and the brother of the virtuoso horn player Dennis Brain. Audrey and Leonard had first met at Uxbridge in 1941.

Leonard died in 1975. During her retirement, Audrey continued to teach the piano to private pupils until 2012.

She is survived by her four children, Jenny, Roger, Michael and Tina.