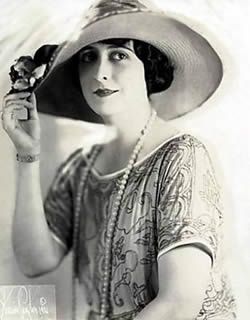 Clara Kimball Young, a pioneer star of the silent screen, was a $200,000-a-year celebrity in the old Vitagraph days. Born in Chicago to a theatrical family, Young began acting on stage at 3. In 1912 she was introduced to screen by Vitagraph.

When movies were just rising above the nickelodeon class, her services became more in demand. She rose rapidly and, according to records, was the first screen player to form her own producing company.

With the advent of talkies, her career lapsed, she ran out of money and her effects were sold at auction. In the 1930s she made a brief comeback in character roles. In 1940 she retired for good and moved into a small Hollywood apartment bare of any mementos of her 50 years in show business.

"I'm living today," she told an interviewer in 1955 as she raised a toast. "I'm in the rocket ship era. To hell with the past!"