What possesses the American public still to believe there was a conspiracy behind the murder of John F. Kennedy 50 years ago? 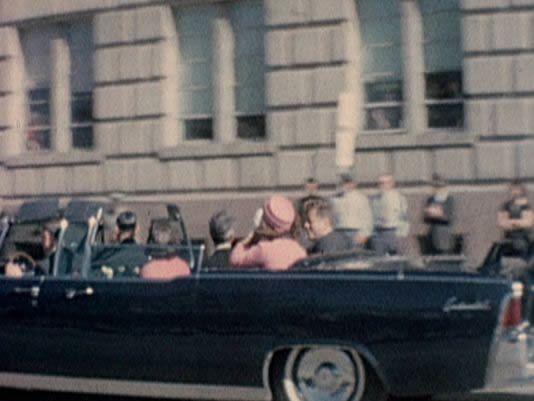 Texas Gov. John Connally and his wife sit in front of President Kennedy and first lady Jacqueline Kenedy in Dallas on Nov. 22, 1963

In a History Channel poll last year, the astonishing figure of 85% of those polled subscribed to the belief. Lee Harvey Oswald must have been a "patsy" of a Mafia organization, people think, or the agent of a foreign government such as Cuba or Russia, or even the tool of a sinister CIA. Surely there had to be a vast and evil empire behind so well-planned and orchestrated a plot. It's a comfortable notion for Americans. There's only one problem: Conspiracy theories are nonsense. There is no credible or convincing evidence of a conspiracy, not by Mafia gangsters or foreign governments or even by U.S. intelligence agents. And yet the rubbish keeps spilling out in print and celluloid. It appears very likely that these fantasies will dominate the American commemoration of Kennedy's death on Friday. Of course, wild stories about nefarious bad guys are entertaining. There's money to be made in conspiracy trafficking. I had hoped, vainly I suppose, that serious historians might take charge of the commemoration and bring us back to the known facts about Dallas. A 50-year remembrance is useful for discarding the falsehoods that have grown up over the years. But will it happen? I doubt it. Perhaps it's simply too hard to swallow the idea of a lone assassin perpetrating so awful a crime out of his own obsessions. It's even harder to accept that the assassin had no animus whatever toward JFK, indeed, that he admired the president. Oswald's mindset The mindset of Oswald is the key to this tragic event, and Oswald had no motive to kill the president. People say, oh well, he was a Marxist. But there are millions of Marxists who are not pathological killers. Well then, they say, he had grandiose ideas. But we all have grandiose ideas from time to time, and that doesn't make us murderers. Ah then, as a Marxist, full of grandiosity, he wished to decapitate the government of the United States by killing its head. That's what the Warren Commission argued. Really? A confused and tormented, 24-year-old with a ninth-grade education has this big, intellectual idea? Power figures in Washington can relate to that. But I doubt it. The truth about Oswald's motive lies in his psychology, not in his politics. There had to have been something deeply personal within Oswald's emotional structure to animate his murderous rage. That anger was directed not against President Kennedy but against Texas Gov. John Connally. With Connally, not Kennedy, Oswald had had a personal grudge. It had to do with a change that was summarily made in his military discharge from honorable to, he thought, dishonorable, after his three years in the Marine Corps and his foray in the Soviet Union. Oswald knew the change would be devastating to his ability to make a living once he returned to the U.S. And so he wrote a heart-felt appeal to Connally, then the secretary of the Navy, thinking a fellow Texan would be sympathetic. But Connally spurned the appeal in a classic bureaucratic brushoff. And the slight arrived in an envelope bearing the smiling face of Connally within a Texas star and hawking his campaign for governor of Texas. From February 1962 onward, Connally became the face of Oswald's frustrations. Wife's testimony Both to the Warren Commission in 1964 and the House Assassinations Committee in 1978, Oswald's wife, Marina, testified that Connally, not Kennedy, was Oswald's target on Nov. 22, 1963. If I am right that the president was not the intended target in Dallas, does that trivialize Kennedy's death? One might analogize the question to the situation where a solider dies accidentally in a combat zone. What if friendly fire killed the poor fellow, or his helicopter crashed, or his humvee turned over in a ditch? When someone is "collateral damage" — to use that insidious modern phrase — does that make his death any less tragic? Is the victim less of a war hero? Should we have separate categories, separate grave stones, separate, lesser medals for soldiers who die in non-combat situations? I don't think so. The strong likelihood that Kennedy was indeed collateral damage in Dallas does not, in any way, lessen the tragedy of his martyrdom, nor does it downsize the power of the Kennedy legacy. James Reston Jr. is the author of The Accidental Victim: JFK, Lee Harvey Oswald, and the Real Target in Dallas.

In addition to its own editorials, USA TODAY publishes diverse opinions from outside writers, including our Board of Contributors. To read more columns like this, go to the opinion front page or follow us on twitter @USATopinion or Facebook.