Frankfurt, Aug. 9 (JTA) – Adolf Heinz Beckerle, a top Nazi leader who was police chief of Frankfurt when the synagogues of the city were set afire in 1938, and who later tried hard to deport all the Jews from Bulgaria to extermination camps, was granted $1,400 compensation by a German court as a "prisoner of war," although he never served in the armed forces. 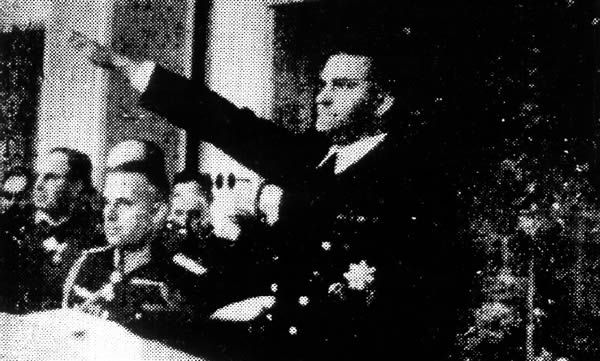 A member of the Nazi Party from 1922 on, and its representative in the Prussian parliament as well as the Reichstag, Beckerle was the top chief of the Storm Troops in Hesse, with the rank of a full general. He held office as Frankfurt's police chief from the beginning of the Nazi regime until 1941, when Hitler sent him to Sofia as "Ambassador" to the puppet Bulgarian Government. In 1944 he fell into Russian hands and was sentenced to 25 years' imprisonment for his role in preparing the war. Last October, the Soviets released him.

The Central Denazification Board for Southern Hesse had classified Beckerle as a "principal culprit" and the "prototype of a Nazi activist," pointing out in particular his responsibility for the persecution of Frankfurt Jewry and for the pogroms of November 1938. After the City of Frankfurt twice rejected his application for "PW compensation," he sued in the Administrative Court.

When former Nazi judge Ernst Rein handed down the verdict, he ordered the municipality to pay the full amount and expressly disallowed an appeal to a higher court. The Association of Nazi Victims thereupon filed a criminal complaint against Beckerle, charging, him with having been an accessory to murder and manslaughter during the 1938 November pogroms. The "Association of Politically Persecuted Social Democrats" noted "with indignation the crying injustice" of the verdict and appealed for intervention by the State Administration of Hesse.

The City of Frankfurt has submitted a complaint to the Hesse Administrative Court against the provision of the judicial ruling that bars the possibility of an appeal.