After 32 years sitting unseen in Channel 1’s archives, a restored version of ‘Memories of the Eichmann Trial’ is being broadcast tonight. 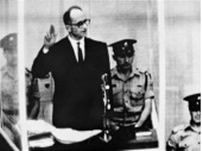 David Perlov’s documentary, Memories of the Eichmann Trial, a 1979 film that was shown just once, on Israeli television, will be broadcast again tonight at 9:30 on Channel 1. This film, which examines the impact that the trial had on different Israelis, including Holocaust survivors who testified at the trial, has had a long and circuitous route to this second screening.

The film, which was not initially greeted with the acclaim of most of Perlov’s other work, languished in boxes in the Channel 1 archive for 32 years. Earlier this year, as the 50th anniversary of the Eichmann trial approached, Perlov’s daughter Yael, herself a filmmaker, and Liat Benhabib, the director of Yad Vashem’s Visual Center, located the film, with the help of Channel 1 archive director Billy Segal.

Yael and Benhabib then undertook the painstaking task of restoring the film. David Perlov died in 2003, but as Benhabib and Yael struggled with the yellowed footage, Perlov’s widow, Mira kept looking for a copy the filmmaker might have kept. Finally, she and Yael found one slightly damaged video cassette, which, unlike the film from the archives, had an intact soundtrack.

The restored film was shown at the recent DocAviv Festival and at the Jerusalem Theater at the end of the Holocaust Remembrance Day. Perlov decided to make the film partly as a response to the Alain Resnais documentary, Night and Fog, which did not explicitly examine the fact that the Final Solution was aimed at destroying the Jews.

In 1962, he made the film, In Thy Blood Live, about the response to the Holocaust in Israel, and then ended it with the Eichmann trial. When he returned to the subject in the late Seventies with Memories of the Eichmann Trial, he used a simple interview format to explore what effect the trial had on witnesses, families of survivors and other Israelis.

Among the interviewees was Henryk Ross, a still photographer who risked his life to take photographs in the Lodz Ghetto with a hidden camera. His photographs were used as evidence in the trial. Perlov, an immigrant from Brazil, was one of the Israel’s most distinguished documentary filmmakers.