A German-American lawyer and his family have been fighting for over two decades to reclaim lucrative properties lost under the Nazi regime. But he continues to face legal hurdles in trying to restore their legacy. 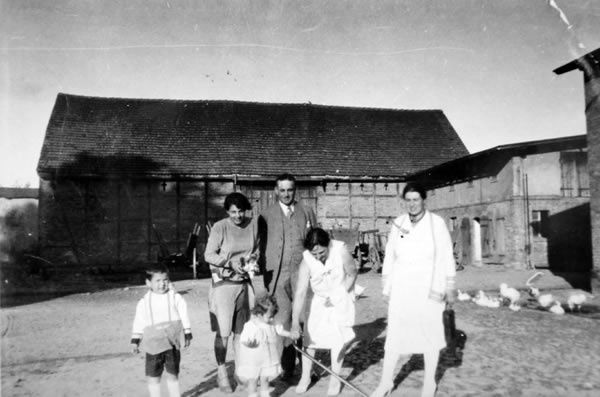 A 1930 photo of the Sabersky family on their property. The lengthy legal battle hinges on whether the Jewish family had voluntarily sold their property for a fair price under Hitler's regime, or whether they had been persecuted by the Nazis and had acted under duress.

Peter Sonnenthal has plenty of experience hunting down the cheats, crooks and cronies who gamble with marked cards at the world's largest casino: Wall Street. During the 1980s, Sonnenthal worked as a lawyer for the US Securities and Exchange Commission (SEC). He was feared and loathed by fraudsters who swindled millions of dollars -- and ended up catching most of them.

But some opponents can bring even a hard-nosed American prosecutor to his knees -- not on the Hudson River in New York, but along the Teltow Canal in the German state of Brandenburg, just outside Berlin. For the past 22 years, Sonnenthal and his relatives have been fighting in German courts for the restitution of property that belonged to their Jewish ancestors. At stake are 84 hectares (250 acres) of prime real estate in the upscale Berlin suburb of Teltow, roughly 1,000 properties in all, worth millions of euros.

The dispute is likely to occupy a prominent place in Germany's legal annals. It all began in 1991, and the row has since made its way through a maze of German courts, starting with the local and state offices for unresolved property issues. From there, the case was brought before the Brandenburg Higher State Administrative Court, was deliberated five times before the German Federal Administrative Court, then dealt with by the German Finance Ministry, and has been appealed to the German Federal Constitutional Court, Germany's highest judicial body. Despite minor victories, Sonnenthal has repeatedly run into obstacles over two decades of litigation.

When his ordeal began, Sonnenthal was 37 years old and living in Denver, Colorado. Now he's 59 and has moved to Berlin, where he occasionally holds a one-man protest at Berlin's central Brandenburg Gate, waving a sign in his hand that reads, "Justice delayed -- is justice denied!"

The battle over the properties in Teltow has pushed Sonnenthal to his limit. "Historical facts are being denied, the law is being abused, and the Nazis of Teltow are being vindicated after the fact," he says. According to Sonnenthal, everything has to be contested in court and absolutely no concessions are made. "This is offensive to the family," he says. "Our property was stolen, and now we have to justify ourselves."

Sonnenthal's story and his family's legacy date back to shortly after the establishment of the German Empire. In 1872, Berlin businessman Max Sabersky and his brother, Albert, Sonnenthal's great-grandfather, purchased an estate on Teltower Lake called Gut Seehof. The family developed part of the land as summer residences for artists, scientists and entrepreneurs.

Max Sabersky was a co-founder of the Aktiengesellschaft Dampfstrassenbahn, a company that launched a project in 1888 to connect by streetcar the villas of the Seehof estate with the train station at Gross-Lichterfelde in modern-day central Berlin. Sabersky also built a lakefront promenade, a spa and a swimming pool on the Seehof property. In later years, the lake was filled in during the construction of the Teltow Canal, which boosted the economy on the outskirts of Berlin. The family ultimately ended up establishing an up-and-coming Berlin suburb on the estate's farmland.

By 1933, this large Jewish family had become part of Berlin high society. For instance, German industrialist Paul Mamroth, co-founder and CEO of electrical giant AEG in Berlin, married one of Max Sabersky's daughters. Mamroth was a member of the supervisory boards of German airline Deutsche Luft Hansa AG and light bulb manufacturer Osram.

After the Nazis seized power, the family members were no longer allowed to work in their respective professions. A so-called "Aryanizer" was commissioned in October 1933 to subdivide the estate and sell off the individual properties. The family had to hand over roughly one-third of their holdings to the town of Teltow, without any compensation. In 1934, the town's mayor, who was also the local NSDAP official, or Ortsgruppenleiter, had the Max-Sabersky-Allee boulevard renamed after Wilhelm Kube, a Nazi who that same year made an infamous remark about Jews: "The carrier of the plague has to be stamped out."

Most members of the Sabersky family fled the Holocaust and took refuge abroad. Only one son hid in Berlin and, with astonishing luck, managed to survive Hitler's rule. This image from Nov. 9, 1938 shows the aftermath of the Kristallnacht pogrom, when Nazi thugs burned and plundered hundreds of Jewish homes, shops and synagogues across the country. Most members of the Sabersky family fled Germany and took refuge abroad. Only one son hid in Berlin and, with astonishing luck, managed to survive Hitler's rule.

After the war, the heirs had a new problem: The family's properties were located in the new Soviet-occupied zone. The Teltow Canal now separated the former Sabersky estate in the East German region of Brandenburg from the West Berlin district of Lichterfelde. The descendents had no chance of reclaiming their property -- until the Berlin Wall fell in Nov. 1989.

Amid the joy of German unification, a legal battle erupted over whether the Jewish family had voluntarily sold their property for a fair price under Hitler's regime, or whether they had been persecuted by the Nazis and had acted under duress. Initial requests for restitution failed: In 1996, all of Sonnenthal's claims were rejected. The authorities responsible for unresolved property issues were not convinced that the Saberskys had sold the properties under pressure from the Nazis. That same year, the case went to the Potsdam Administrative Court, where legal proceedings continue to this day.

For the past 16 years, presiding judge Wilfried Hamm and associate judge Peter Pfennig have been dealing with the case. Sonnenthal feels downright persecuted by them. "From the very first day, they have decided against us," he says. In a seemingly eternal legal standoff, Hamm and Pfennig have consistently rejected every claim and motion to appeal. Meanwhile, the heirs have taken their case to the Federal Administrative Court, which has referred part of the legal dispute back to Potsdam -- to Hamm and Pfennig.

However, there were two apparent game changers that, at least for a moment, appeared to bring the endless dispute to a close. In 2003, the Federal Administrative Court declared in its "Teltow-Seehof III" decision that it had "no doubt" that the Jewish family had sold under pressure from the Nazis. Morevoer, in 2005, the German federal government agreed to a settlement with the heirs concerning all of the properties. Peter Sonnenthal and his family have been fighting for over two decades to reclaim lucrative properties lost under the Nazi regime. But he continues to face legal hurdles in trying to restore their legacy.

'Historic Responsibility' Then the town of Teltow got involved. Since 2006, it has been challenging the negotiated restitution and the actions of the federal government. The local government seems to doubt the historic persecution of its Jewish population. A lawyer for the town has argued that Paul Mamroth resigned from his business and leadership positions in the Nazi era due to old age, and "not because of Nazi oppression." Nevertheless, a commemorative plaque in the Teltow cemetery recognizes him as the AEG CEO, an honorary senator of the Technical University of Berlin, and a man who was "persecuted by the Nazi regime." The town's lawyer also presented documents from the city archives that she says prove that the Jews in Teltow were hardly threatened at all during the early years of National Socialism, because the Nazis were initially "busy eliminating Social Democrats and communists," as she put it. The case is a relentless clash of opinions over historical facts, legends and interpretations. In the Teltow tourist information center there is a book by two historians with the title: "They Were Our Neighbors: Jewish Life in Teltow until 1945." It documents the Saberskys' life after 1933: "The Reich Hereditary Farm Law of Sept. 29, 1933 prohibited Jews from pursuing agricultural activities," the authors write. "Since this law seriously jeopardized the family's income, they had no choice but to sell their property to finance their emigration." Still, the town believes that the Saberskys intended to sell their properties out of economic interest as far back as 1927. Experts from the Center for Research on Anti-Semitism at Berlin's Technical University, however, have assured the heirs that the family "sold their property due to the Nazis' policies of systematic and collective exclusion of Jewish citizens." Political Agenda? Robert Unger is an experienced defense lawyer in Berlin, and his law office has been representing Sonnenthal for years. He says that he has never experienced a case like this. "The town of Teltow's claim that -- after 60 years of living and developing their land in Teltow -- the Saberskys voluntarily decided to transfer their entire property to a Nazi is absurd and grotesque. It's a disgrace." Thomas Schmidt, the mayor of Teltow, rejects all insinuations of prejudice and right-wing extremism, and contends that the town does not have a political agenda in the case. He notes that a forest has grown on the properties that Sonnenthal intends to reclaim, arguing that some of the land now falls within nature conservation areas. But something does not add up here: Is it the fault of the heirs that the trees grew so magnificently in the shadow of the Berlin Wall? Roundtable negotiations have occasionally been held in Teltow in the past. But correspondence between the city and Sonnenthal's lawyers reveals that Teltow has now unilaterally suspended the talks for "an indefinite period." Still, Sonnenthal says that he expects the town council to assume its "historic responsibility." More Red Tape Schmidt responds that the city has laid paving stones engraved with the names of Jewish citizens, known as Stolpersteine. He notes that his own grandmother was Jewish; she died in Auschwitz. The mayor argues that no one can accuse him of anti-Semitic behavior. Schmidt says that the city is prepared to talk, but as mayor he has to respect the laws. The town and the courts are more likely to agree to a settlement, rather than restitution. But Sonnenthal is not prepared to renounce any additional pieces of his inheritance. He sees it as degrading. "I'm going to continue until the bitter end," he says. The Potsdam Administrative Court recently handed down additional rulings, but nothing decisive for Sonnenthal and his family. And, as usual, such rulings cannot be appealed, forcing Sonenthal's lawyers to file additional complaints. Meanwhile, Sonnenthal has petitioned the German Federal Constitutional Court. After 10 of the family plots were ultimately returned to him, he was denied permission to build duplexes on the land. When the land was expropriated from his family, it had been zoned for residential construction. Now the courts are arguing that building permits can possibly be granted based on the construction planning of 1935. Once again, the joke is on Sonnenthal. But he isn't laughing. No government agency in the world would approve the construction of new homes according to building codes from 1935.