Lieutenant-Colonel John Gaff was a bomb disposal expert in Ulster who defused a booby-trapped device and won the George Medal. Lieutenant-Colonel John Gaff , who has died aged 86, was in overall command of all bomb disposal units during his posting to Northern Ireland in the 1970s and was awarded a George Medal.

In 1974 Gaff was posted to the Province as Chief Ammunition Technical Officer (CATO) and was the Explosives Ordnance Disposal (EOD) adviser to the General Officer Commanding Northern Ireland during one of the most active periods of the insurgency.

The bomb in the signal box, however, proved more difficult to neutralise as its exact position was not known — and it was suspected that it was booby-trapped. For nearly eight hours Gaff investigated every inch of the site despite the great danger.

Then he noticed a small bump under a piece of linoleum at the bottom of a stairwell in the signal box building. This turned out to be the pressure switch of the booby trap. It was a sensitive device, and Gaff had to place disruptive equipment alongside the pressure switch, knowing that the slightest pressure in the wrong place would detonate the device and result in his being killed or badly injured.

After the booby trap circuit had been disrupted he found 70lb of explosive charge under the stairs. The successful neutralisation of the bomb, after nearly 15 hours of hazardous work, avoided damage to the signal box and kept open a vitally important railway line.

Gaff was awarded a George Medal, in the words of the citation, “for the outstanding personal courage and devotion to duty which he demonstrated throughout his tour of Northern Ireland in an extremely hazardous and highly technical field of operations”. 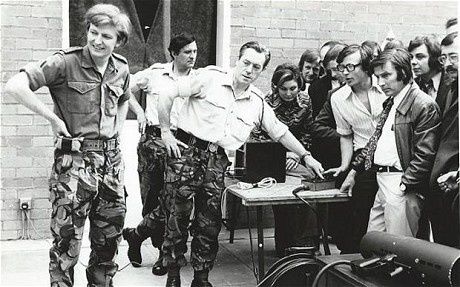 John Maurice Gaff was born at Guildford on May 27 1927 and educated at the Royal Grammar School in the town. His sense of adventure was evident early on. Aged 10, he used up a week’s pocket money for his first trip in an aeroplane, a 30-minute flight in a De Havilland Dragon Rapide.

When he was in his teens he fashioned a primitive snorkel out of an Army gas mask, tied two bricks around his waist and, with a friend in a ferry boat holding the hose through which he was breathing, walked along the bed of the river Wey.

In 1944 he volunteered to join the Army and, in 1946, after infantry training, was commissioned into the Queen’s Royal Regiment. Shortly after being posted to the 1/6th Battalion in Palestine, he transferred to the Parachute Regiment and joined 9 Parachute Battalion. On the day that his company motored into Haifa, the police station in the town was blown up, just seconds before they passed the building.

His duties included suppressing riots, searching houses for arms, manning vehicle checkpoints and escorting supply columns. He trained as a frogman, and much of his off-duty time was spent helping Royal Navy divers sweep the bottom of vessels for limpet mines while they were in the oiling basin taking on fuel.

Having become interested in explosives, Gaff was appointed weapons training officer. On one occasion he was delivering a message to one of the staff at HQ South Palestine District and had placed the letter on the officer’s desk when the wind from the fan blew it on to the floor.

As he bent down to pick it up, there was a huge explosion as a bomb planted in a stolen Army truck detonated. The officer sitting behind the desk was killed instantly. Gaff, semi-conscious, was carried out on a stretcher. On the way to the hospital, the ambulance was machine-gunned by the same gang. Gaff’s battalion, renamed 8/9 Para Battalion, left Palestine in 1948 after partition and returned to England. He was then posted to the Demonstration & Experimental Company at Netheravon, where one of the tasks was to carry out jump trials on new aircraft. In all he made more than 300 jumps during his tour.

After a posting to RAF Cardington, where he trained parachute territorials in balloon descents, Gaff obtained a regular commission in the Royal Army Ordnance Corps and qualified as an Inspecting Ordnance Officer – later designated Ammunition Technical Officer (ATO).

He served at a base ammunition depot at Singapore during the Malaya Emergency, and there was considerable unrest in the Chinese student community at the time. He returned to Britain in 1957 upon his posting to Central Ordnance Depot, Donnington, as Guided Weapons Liaison Officer. A series of home appointments followed, interspersed with postings to Berlin and central Westphalia, BAOR.

In 1974 he was sent to Northern Ireland. Rapid development of equipment and methods of response became essential in the face of constant changes in IRA tactics. Much time and effort was employed in countering car bombs, but the next threat entailed the capture of a driver and his family — the family being held hostage until the driver had done the terrorists’ bidding.

Cars were driven into barracks and drivers ordered to throw away the keys. Gaff countered this by organising the construction of “panic pits” into which the driver could drive and get clear from the car before it exploded.

On one occasion Gaff became stuck in a petrol tanker with an unexploded device, but managed to extricate himself by stripping down to his underclothes and squeezing through the inspection hatch without setting it off. The filming by the BBC of the operational part of the television film The Bomb Disposal Men took place during his tour.

In May 1975, after 31 years’ service, Gaff resigned from the Army and set up a consultancy offering training and equipment for bomb disposal. He carried out bomb risk surveys, trained EOD operators, installed the systems needed and provided a full range of EOD equipment to foreign governments. His work involved extensive travel to Africa, the Middle East and the Far East.

In 1998 he sold the business and became secretary and treasurer of the Gallantry Medallists’ League. He was later elected president, a position he held for six years. He was also treasurer of the local branch of the MS Society and worked as divisional secretary for SSAFA Forces Help.

As a young man Gaff enjoyed sport, particularly gymnastics and rugby; an early passion for bicycles developed into a later one for motorbikes. He qualified as a glider pilot and also went diving whenever possible — he was among the first to dive on the wreck of the Mary Rose. In retirement, music and gardening gave him great pleasure.

John Gaff married, in 1950, Christine Brown, who survives him with their daughter and two sons.