Many Nazi prisoner-of-war camps were notorious for their forced labor and deadly conditions. Yet a collection of photos that mysteriously turned up in southern France tells the story of a seemingly relaxed prison camp in Bavaria, once touted by the Nazis to show their supposed respect for human rights. The Polish officers imprisoned in Murnau were allowed to put on plays and operettas as entertainment. Since there were no female inmates at the camp, men took on the women's roles in drag, apparently having much fun with it.

The Polish prisoners in the photographs are wearing costumes. Some of the men are decked out in made-up uniforms complete with impressive medals, moustaches and pince-nez. Others have squeezed into women's dresses, darkened their eyelashes and hidden their hair under blond wigs. They laugh and dance across the stage, while in the orchestra pit below them sit more fellow prisoners, cheerfully intent on the score they are playing on their violins, flutes and trumpets.

These are scenes from daily life in a Nazi "Oflag" -- short for "Offizerslager," or prisoner-of-war camp for officers -- in Murnau, in the far south of Bavaria, during World War II.

The pictures don't exactly fit the usual image of a Nazi camp, with its associations of forced labor and mass murder. Indeed, reports of prisoners performing plays, of libraries, exhibitions, athletic events and academic lectures behind the barbed wire and prison walls have always sounded highly implausible. There was reasonable skepticism even after the war ended and the prisoners returned home, bringing with them tales of an apparently rich cultural life in the prisoner-of-war camp.

In Germany, most people still know little about the living conditions of the Polish officers who were held in Oflags. One reason for this is the language barrier: Memoirs by former Polish prisoners of war published over the years have generally appeared only in Polish.

It's a different story with photographs. Yet it still took over a decade before the general public in Murnau learned of an unusual collection of pictures found in southern France, documenting with an astonishing level of detail activities at Oflag VII-A here at the foot of the Alps, shortly before the end of World War II.

A Wooden Box in the Trash

It was a winter night in 1999 and Olivier Rempfer, then 19, was walking back to his town of Cagnes-sur-Mer in southeastern France after an evening spent with friends in the neighboring town of Saint-Laurent-du-Var, when a wooden box on top of a trash container caught his eye. Curious, he opened the box and saw a number of cylindrical objects wrapped in paper.

Rempfer waited until he was back home to unwrap the objects. When he did, they turned out to be rolls of black and white 35-milimeter film. Holding the filmstrips up to the light, he saw uniforms, barracks, guard towers -- and men in costume onstage. Assuming the pictures must have been taking during the filming of a war movie, and the men in them to be actors, Rempfer set the box aside and forgot about it.

Years later his father, Alain Rempfer, came across the box. The elder Rempfer, a photographer, was also unsure what the film negatives showed -- until 2003, when he bought a film scanner and eventually found the time to take a closer look at the images, around 300 of them. "I quickly realized that these were real, historical photos, taken during the war in a prisoner-of-war camp," says Rempfer, 64. "The brand name 'Voigtländer' was written on the edge of the film. That name wasn't familiar to me from movies, but I knew Voigtländer was a German camera manufacturer."

'These Young Men Looked Right at Us'

Rempfer looked for some clue as to where the pictures might have been taken. One showed a truck with several men seated on its bed. On the back of the truck, Rempfer made out the words "PW CAMP MURNAU" in white letters, then the letters "PL." A little research showed that from 1939 to 1945, the German town of Murnau was the site of a prisoner-of-war camp for Polish officers.

Father and son studied the photographs closely and with fascination. "All these young men looked right at us through the camera, during the time they lived in the camp," Alain Rempfer says. "And we don't know their names or what their daily life was like there, we don't know anything about their hopes, their feelings." It was a strange experience, Rempfer adds, as if someone had turned off the sound and left him watching a silent film.

"Olivier and I thought perhaps we should give the photographs to a museum or a library," Rempfer says. "But we worried they would just be forgotten for years all over again." Ultimately, the father and son decided a website would be the best way to show the pictures to the world. They hoped the images would reach anyone who might be interested in them, but especially family members of the former prisoners of war who might be looking for information, or might recognize someone in the photographs.

An Overlooked Chapter of History

And indeed the Rempfers heard from many family members of Polish prisoners-of-war, families now living in the US, Australia, Canada or England. "Some of them recognized their fathers, grandfathers or uncles in the pictures," says Alain Rempfer. After their liberation, the former prisoners of war generally said little about their years in captivity, keeping their memories to themselves, Rempfer adds. For many of the family members, this was their first opportunity to learn what these officers' lives had been like during that difficult period.

Rempfer says he never tried to find the photographer who took the pictures. "That just seemed too difficult," he says. "We thought that, if anything, the website might help. But so far that hasn't been the case."

In Murnau, too, there has been an effort over the years to collect information about the camp, but few publications on the topic have reached readers outside the region. The daily Frankfurter Allgemeine Zeitung did publish one article, "Polish Prisoners of War in German Officers' Camps - an Overlooked Chapter of History" by German historian Alfred Schickel, in 1980. Schickel, however, later came to be associated with right-wing extremism. In the 1980 article, he lamented the lack of interest on the part of "historians both here and elsewhere in the West" in the fate of the approximately 18,000 Polish officers who became German prisoners of war.

Out of 12 Nazi prisoner-of-war camps for officers, Murnau was the one with the highest-ranking prisoners. These included, among others, Admiral Jósef Unrug, commander of the Polish navy, as well as General Juliusz Rómmel, who led the defense of Warsaw in 1939.

"The prisoners were treated well, at least as much as that can be said under these circumstances," explains Marion Hruschka, head of Murnau's historical association. Hruschka has spent many years looking into the history of the Oflag, and organized an exhibition about it. Oflag VII-A in Murnau, which held more than 5,000 prisoners in total, was run as something of a "model camp," Hruschka says, and was "regularly inspected by the International Red Cross." The Nazis' intention, she explains, was to convey the impression that they were adhering to international law and to the Geneva Conventions.

But this was far from true, Hruschka continues. In multiple cases, prisoners were shot. And in general the supposedly correct treatment of the prisoners ceased wherever it collided with the Nazis' racist ideology. Jewish Polish officers, for example, were separated from the other prisoners and kept in a camp ghetto.

But how did photographs from a prisoner-of-war camp in Murnau end up in the south of France?

In the last days of the war, Hruschka says, several hundred Allied soldiers arrived in Murnau, French soldiers among them. It's certainly possible the connection lies there, but it's not the only possibility. Hruschka suggests, for example, that a Polish officer might have moved to France after the war and taken the pictures with him.

Who Was Allowed to Take Photographs?

Just as it is impossible to say who might have taken the photographic film out of the camp, it's also impossible to know whether the pictures, which include photos of the camp's liberation by American troops and images of a bombed-out Munich, were taken by one photographer or several.

The value of the find, however, is indisputable. "Seeing so many photographs stunned me," Hruschka says. "I always assumed only Germans were allowed to take pictures inside the camp."

Hruschka says she's now revised opinion. One German photographer is known to have been present inside the camp, she explains. His pictures, in censored form, were printed out as postcards that the prisoners were allowed to send home. Most of these images showed theater performances or sporting events, and some of them are archived in Murnau.

Translated from the German by Ella Ornstein The eyewitness Tom Wodzinsky, who got in touch with the Rempfers after the publication of the pictures, said this photo likely shows the accommodations for junior officers and regular soldiers in blocks E, F, G, H and K in the camp. 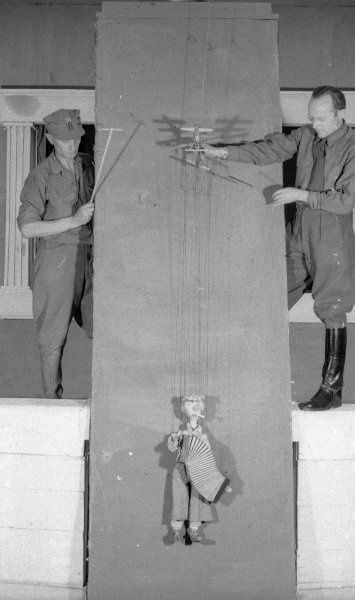 Two prisoners of war play with a marionette. Most of the imprisoned Polish officers belonged to the military elite and were spared the forced labor common in Nazi camps. Rather, the officers were granted plenty of free time. An orchestra was also part of the officers' camp Oflag VII-A in Murnau. The officers' audiences were composed of German soldiers at the camp, who occasionally brought their families with them to the shows. 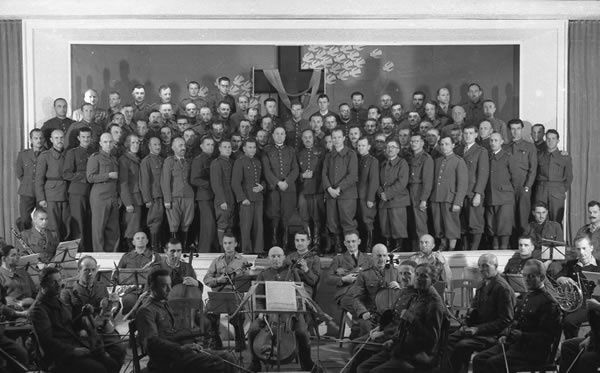 A group of officers poses on the stage of the camp theater, with the orchestra in the foreground.