Berlin, Nov. 24 (JTA) – The Voelkischer Beobachter, principal mouthpiece of the Nazi Party and personal property of Reich Chancellor Adolf Hitler, yesterday bluntly stated that Reich Minister of Economics Dr. Hjalmar Schacht has no influence with Hitler and that Jews will definitely be eliminated from the nation's commerce. 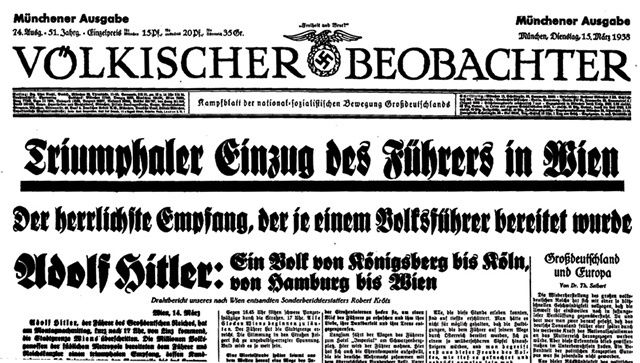 Almost in the same breath, however, the Beobachter indicated that there will be no swift and drastic process of liquidation of Jews from the Reich's commercial life.

The liquidation, it declared, will proceed in an "evolutionary" way.

"We must leave the question of breaking down Jewish influence in commerce to the will of Der Fuehrer who will determine the tempo," the paper advises. "It is ridiculous to assert that anyone else's personal opinion on the Jewish question is influencing Nazi policy along with Der Fuehrer's will."

The Beobachter goes on to warn that "the large influence of the Jews cannot be broken today or tomorrow because this will lead to serious consequences for Nazism."

In business circles today the Beobachter's statement brought forth the comment that despite what the publication said, it was quite apparent that Dr. Schacht's influence with Hitler was far greater than Nazi officials of the more radical wing were willing to admit. This viewpoint was supported, it was stated in these circles, by the Beobachter's own disclosures that the liquidation will be "evolutionary" rather an abrupt. They emphasized the fact that Dr. Schacht has all along been pleading

against a sudden elimination of Jews from commerce, frequently warning that any such attempt would seriously upset the entire German economic system and plunge the nation into serious difficulties.

It was pointed out in this connection that Dr. Schacht's order eliminating Jewish brokers from membership in the Boerse was a sop to the radical elements in the party and Hitler cabinet which meant little or nothing since only thirteen (the figure is Der Angriff's) Jews are affected by it.

"Complete elimination of Jewish lawyers is the demand of the Nazi movement," Reich Minister without Portfolio Dr. Frank stated at a conference of leaders of the Nazi Lawyers' Association, according to the Nazionale Sozialisticher Partei Korrespondenz, official Nazi organ.

The publication quotes Dr. Frank as declaring that Jewish lawyers have converted German law into a business and that therefore "they as well as other unworthy elements must be eliminated."

Dr. Frank concluded by pointing out that elimination of the Jewish lawyers will give Nazi attorneys the opportunity to earn a better living.