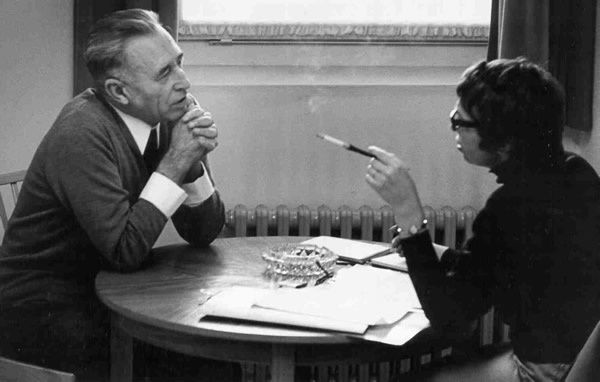 Franz Stangl, who joined the Austrian police and the illegal Nazi party at age 23, was promoted up through the ranks to finally become SS Hauptsturmführer by the end of the war. After the Anschluss, the annexation of Austria into the Third Reich, Stangl first served as a Gestapo agent in Linz and was then appointed chief of police of an institute in the Gemeinnützige Stiftung für Anstaltspflege (Charitable Foundation for Institutional Nursing) with headquarters in a Berlin villa at Tiergartenstrasse 4. T4 became the term for the headquarters of this institute and Aktion T4 was used by insiders for the Nazis euthanasia program. In November 1940, Stangl was transferred back to Upper Austria, this time to the Schloss Hartheim euthanasia institute where he became the deputy of Christian Wirth, the inspector of the entire Nazi euthanasia program.

This T4 killing institution served as an experimental and training center for the industrial murder of human beings. It was the place where Stangl and many of the others responsible for the extermination of Jews within the Aktion Reinhard received their technical and psychological training. Those who qualified were sent to the gas chambers and the crematoria in the death camps, where their high positions made them instrumental in the “final solution”. After serving in Hartheim, Stangl was put in charge of the Sobibor and Treblinka extermination camps, where he became the “best commandant in Poland” for his sterling services in the logistics of industrialized murder. He was responsible for the murder of approximately 900,000 people in the period 1941-1943.

In 1943, Franz Stangl, together with Odilo Globocnik, Christian Wirth and another 120 men, was deployed to the Adriatic coastal area to combat partisans, in the assumption that most of these men who had been in charge of the mass liquidations in the East would not survive the combat and thus could not talk about the exterminations.

Stangl, however, returned to Austria in 1945, where he was seized by the U.S. authorities and arrested in the Glasenbach internment camp. He was at first questioned merely about his anti-partisan activities in Yugoslavia and Italy and was about to be released in 1947, when it became known that he had worked in Hartheim at the beginning of the war – in the euthanasia castle, which had only just begun to interest the Austrian authorities. Pending his trial he was transferred from Glasenbach to a remand prison in Linz, from where he managed to escape in 1948. With the help of Bishop Hudal in Rome and with an international identity card from the Red Cross, he and his family first fled to Syria and later to Brazil.

Simon Wiesenthal first ran across the name of Franz Stangl in 1948 on a classified list of decorations received by high-ranking SS officers. Certain names on this list were followed by the pencilled notations “secret Reich matter” or “for psychological discomfiture”, which according to Wiesenthal was the encoded Nazi terminology for “special merits in the engineering of mass extermination”. His subsequent research further convinced him of the important role Stangl had played in the Holocaust. After ascertaining his home address in Wels, Austria, he was told by neighbors there that Stangl’s wife and three daughters had left for Syria in May 1949; they had seen two crates standing in the yard which were to be sent to Franz Paul Stangl at an address in Damascus. The Stangl family left Syria in 1956, with their destination unknown.

The breakthrough came in 1964, when Wiesenthal was approached by a former Gestapo officer who requested money for information about Stangl. His message that he was working as a mechanic for Volkswagen in Sao Paulo turned out to be correct and a Brazilian contact soon provided Stangl’s exact address.

Even though Stangl was meanwhile wanted by Austria not only in connection with the Hartheim trials but also because of his role in the Sobibor and Treblinka concentration camps, Wiesenthal did not at first turn to the Austrian Ministry of Justice with his information, fearing that Stangl might be warned if too many people were involved and go into hiding before Brazil could be persuaded to arrest and extradite him. At the beginning of 1967, however, Wiesenthal consulted with the Minister of Justice in Vienna and secret arrangements were made to use diplomatic channels to forward to the Brazilian authorities the charges against Stangl (in Portuguese translation), the Austrian extradition demand, as well as supporting evidence. These documents finally led to Franz Stangl’s arrest by the Sao Paulo police on February 28, 1967.

Because Brazil had until then never extradited a Nazi criminal, Wiesenthal mobilized friends and supporters in different countries to organize survivor demonstrations in front of Brazilian embassies. He also persuaded the proper authorities in Germany and in Poland to formally demand Stangl’s extradition from Brazil. The former U.S. Attorney General, Senator Robert Kennedy agreed to intervene with the Brazilian Embassy in Washington D.C. Under the pressure of public opinion and numerous interventions, the Brazilian government in 1967 acceded to Germany’s extradition demand. After lengthy preparations, the trial against Franz Stangl commenced in Düsseldorf, on May 13, 1970. Wiesenthal was greatly satisfied that Stangl could now finally be publicly confronted with at least a part of his abominable crimes and that they would be brought to the world’s attention.

On December 22, 1970, Stangl was sentenced to life imprisonment for joint responsibility in the murder of at least 900,000 men, women and children during his tenure as commandant of Treblinka. By tracking down Franz Stangl, who was charged with the murder of 1.200.000 people and found guilty of having committed three quarters of them, and by successfully accomplishing his extradition more than two decades after the end of the war, Wiesenthal presented Germany “its most significant criminal case of the century”.

Stangl died of heart failure in the Düsseldorf prison, on June 28, 1971.