At least 10 people suspected of committing Nazi war crimes were never deported from the U.S. despite losing the American citizenship they gained when they immigrated, The Associated Press reports. A main cause of the delay is simple: Their European homelands don't want them back. 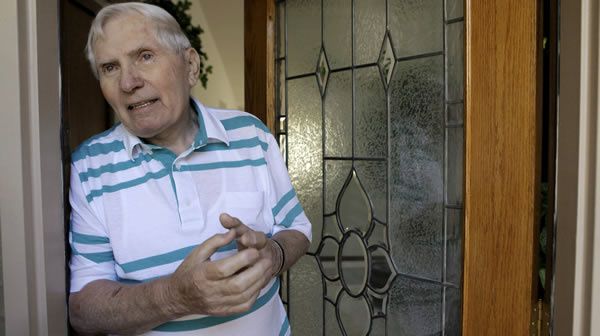 John (Ivan) Kalymon talks about his deportation outside his Troy, Mich., home in this 2009 photo. Kalymon is one of at least 10 suspected Nazi war criminals who remains in the United States despite attempts to deport him.

"In the 34 years since the Justice Department created an office to find and deport Nazi suspects, the agency has initiated legal proceedings against 137 people. Less than half — at least 66 — have been removed by deportation, extradition or voluntary departure," .

The news agency's review of Justice Department data on Nazi war criminals found that of the 10 men, six died in the U.S. with their cases unresolved. Four were still living in the U.S. despite deportation orders: Vladas Zajanckauskas, 97, of Sutton, Mass.; Theodor Szehinskyj, 89, of West Chester, Penn.; John (Ivan) Kalymon, 92, of Troy, Mich.; and Jakiw Palij, 89, of New York City.

Kalymon remains despite a 2011 that affirmed his deportation order. Kalymon and the other men who were ordered deported have denied the claims against them.

The AP reports that "all have been in the same areas for years, stripped of citizenship and ordered deported, yet able to carry out their lives in familiar surroundings. Dozens of other Nazi war crimes suspects in the U.S. were also entitled to Social Security and other public benefits for years as they fought deportation."

But the process of deporting the suspects is often frustrated by other countries' refusal to accept them, several experts in the field tell the AP, especially in cases where the question of jurisdiction is a murky one.

And the AP article by Amy Forliti and Randy Herschaft finds that in some cases, U.S. officials decline to deport the suspects due to health concerns, or because of the suspects' cooperation in a wider inquiry. At least 20 suspects have died while their cases were still pending.

The case of Nazi war criminal John Demjanjuk attracted widespread attention in recent years, as the former Ohio resident — a native of Ukraine — was eventually convicted of more than 28,000 counts of being an accessory to murder, for his role as a guard at a prison camp in Poland.

At 91, Demjanjuk "died a free man in a nursing home in southern Germany, where he had been released pending his appeal," as last March.

It seems that no current Justice Department employees would speak on the record with Forliti and Herschaft about their findings. But in a recent discussion of its efforts to prosecute and deport war criminals, the federal agency noted that it had "won cases against 107 individuals who assisted in Nazi persecution.

"In addition," the Justice Department said in 2011, "180 suspected Axis persecutors who sought to enter the United States have been blocked from doing so as a result of the department's 'watchlist' program."