Bonn, Feb. 16 (JTA) – Five more former officers of Hitler's SS will go on trial tomorrow for the wartime murder of Jews. Thus, three court proceedings against ex-Nazis will be under way simultaneously in this country this week. 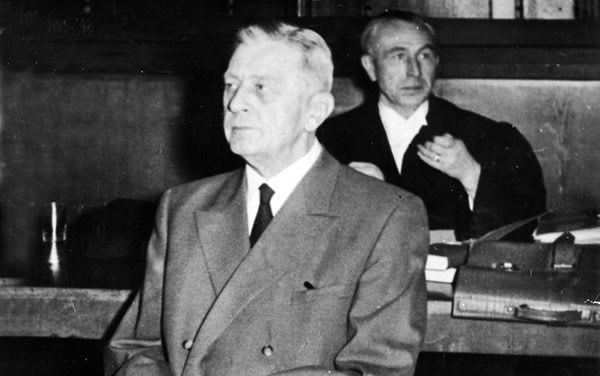 The latest five will face a court in Brunswick. At Frankfurt, the court there will resume its trial of 22 Nazis accused of murdering hundreds of thousands of Jews at the Auschwitz-Birkenau death factory. On Tuesday, another trial will open at Limburg, involving Mazis charged with carrying on Hitler's euthanasia program, under which at least 200,000 victims, mostly Jews, were executed in "mercy" killings of so-called mental defectives.

The Brunswick trial concerns five members of the Second Cavalry Regiment of the SS who, according to the indictment, participated in the murder of 5,200 Jews in Pinsk, Byelorussia, in the summer of 1941 One of the chief witnesses among 100 to be called will be former Gen. Erich von dem Bach-Zelewski, who is now serving a life term for war crimes. He is believed to have been the officer who smuggled the poison with which Marshall Herman Goering committed suicide in the prison at Nuremberg on the day he was scheduled to be hanged.

All five on trial at Brunswick are charged with having distributed an order issued by the late Heinrich Himmler, commander of the SS, who had stated: "All Jews must be shot. All Jewish women must be driven into the marshes. Action Pinsk must be carried out even if it takes a few days."

At the Frankfurt trial, which has been under way off and on since December 20, the 22 defendants there will face the court again, after a recess of 10 days during which most official German activities, civilian and governmental, were suspended due to the pre-lent carnivals.

The Limburg proceedings, to start Tuesday, will go on despite the fact that two of the four scheduled defendants have committed suicide while a third has fled the country. One of the suicides was Dr. Werner Heyde, the chief of Hitler's "euthanasia" program, who hanged himself last week. An investigation was being pushed here this weekend into Dr. Heyde's death, as the German press voiced severe criticism over the case.

Meanwhile, a charge that 24 other doctors who had been active in the "euthanasia" program were now still practicing medicine in Germany was voiced here today by Herman Langbein, secretary of the Survivors Organization. He said his organization has the names of the ZZ. Some of them, he said, had already been convicted and punished for their war crimes but were released. Just the same to continue their medical practice. All 24 had worked in Nazi death camps, where millions of Jews had been murdered, he said. He demanded that the West German Chamber of Physicians disqualify these doctors.