Mile Budak (30 August 1889 – 7 June 1945) was a Croatian politician and writer best known as one of the chief ideologists of the Croatian fascist Ustaša movement, which ruled the Independent State of Croatia during World War II in Yugoslavia from 1941–45 and waged a genocidal campaign of extermination against its Roma and Jewish population, and of extermination, expulsion and religious conversion against its Serb population. 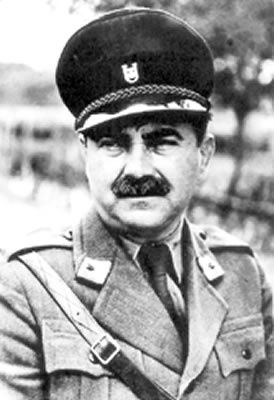 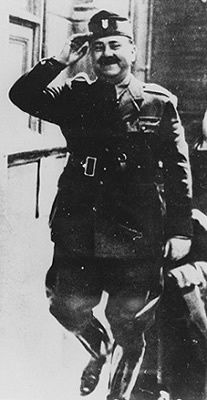 Mile Budak was born in Sveti Rok, in Lika, which was then a part of the Austro-Hungarian Empire. He attended school in Sarajevo and studied law at the University of Zagreb. In 1912, he was arrested by Austro-Hungarian authorities over his alleged role in the attempted assassination of Slavko Cuvaj, Croatian ban (viceroy). Budak and Vladko Maček served as lawyers representing Marko Hranilović and Matija Soldin at trial amid the January 6th Dictatorship. On 7 June 1932, he survived an assassination attempt by operatives close to the Kingdom of Yugoslavia. Afterwards, he migrated to Italy to join the Ustaše and become the commander of an Ustaše training camp. In 1938, he returned to Zagreb where he began publishing the weekly newspaper Hrvatski narod. In 1940, the authorities banned the newspaper and he was arrested. On 31 March 1941, in a joint letter to Hitler, Pavelić and Budak asked him "to help Croatian people establish an independent Croatian state that would encompass the old Croatian regions, among them Bosnia and Herzegovina".

When the Independent State of Croatia was proclaimed, Budak became the state's chief propagandist and Minister of Education and Faith.[6] As such, he publicly stated that forcible expulsion and religious conversion of the ethnic Serb minority was the official national policy. Budak signed the Ustashe regime's racial laws against Serbs, Jews, and Roma. Croatian novelist Miroslav Krleža described Budak as "a minister of culture with a machine gun". In a speech in Gospić on 22 July 1941, he declared: "The movement of the Ustashi is based on faith. For the minorities we have three million bullets. We shall kill one part of the Serbs, expel the second part, and convert to Catholicism the third part of them". This exposition of Ustaše policy is attributed to Budak. He later became Croatian envoy to Nazi Germany (November 1941 – April 1943) and foreign minister (May 1943 – November 1943). When the Independent State of Croatia collapsed, Budak was captured by British military authorities and handed over to Tito's Partisans on 18 May 1945. He was court-martialled (before the military court of the 2nd Yugoslav army) in Zagreb on 6 June 1945 and was sentenced to death by hanging the same day. His execution the following day took place exactly 13 years after the assassination attempt on his life. During the trial, Budak behaved cowardly, constantly weeping, and claiming he was not guilty of anything

Budak was known for his literary work, especially novels and plays in which he had glorified Croatian peasantry. His works included Ognjište (The Hearth), Opanci dida Vidurine (Grandpa Vidurina's Shoes), Rascvjetana trešnja (The Blossoming Cherry Tree). About Budak's writing, E.E. Noth wrote: "Here we find the stubborn, spiritual-realistic conception of man and his relation to the soil on which he lives and which Mile Budak symbolizes as 'the hearth'". After the war his books were banned by Yugoslav Communist authorities. Thus, many Croatian nationalists viewed Budak as a great figure of Croatian literature, equal, if not superior to the leftist Miroslav Krleža. Following Croatian independence in the early 1990s, the Croatian Democratic Union badly wanted to reinterpret the fascist Ustasha quislings of World War II as a Croatian patriotic force. Hence, the reissue in early 1993 of the collected works of Mile Budak,the second-in-command in the Ustasha regime. Commenting, at the time of this reissue, Croatian writer Giancarlo Kravar wrote: "... Ustashism, in its history, was undoubtly also a positive political movement for the state-building affirmation of Croatianism, the expression of the centuries-long aspiration of the Croatian people". For others, Budak was "a mediocre Croatian author", "a mediocre writer at best", "a writer of middling originality and imagination" or a writer which literary work is "average and without lasting value".