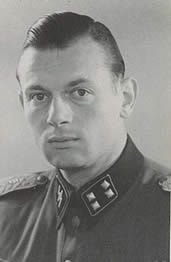 SS-Standartenführer (Colonel) Hans Wilhelm Kempin (7 June 1913 – 30 November 1992) was a German Waffen-SS combat and training officer who served in the SS-Standarte Deutschland, SS-Regiment Der Führer and later commanded the 547. Volksgrenadier-Division, 38. SS-Grenadierdivision Nibelungen (the name Nibelungen comes from German mythology, which was the name of a lineage of dwarves, who were defeated by Siegfried), 32.SS-Freiwilligen-Grenadier-Division 30.Januar (the strange title of the division, comes from the date when Adolf Hitler, became the chancellor of Germany on 30 January 1933), and the Waffen-SS Unterführerschule in Laibach (Ljubljana).

Hans Kempin, a son of businessman Willi Kempin, was born in Berlin-Lichtenberg. After graduating from the Hohenzollern Gymnasium in Schwedt in 1928, Hans worked as a banker. In September 1930, he joined Sturmabteilung, or the SA, and in December of the same year also the NSDAP. After two years as an SA member, in July 1932, the 19-year-old Kempin entered the SS-VT and was given the rank SS-Anwärter (Candidate). In October 1933, Hans Kempin was assigned to the premier SS-VT division Leibstandarte-SS Adolf Hitler and then sent to the new SS-Junkerschule at Bad Tölz. After his graduation he served with the SS-Standarte Deutschland and later was given command at the SS-Junkerschule Braunschweig. In 1938, he was transferred back to SS-Standarte Deutschland and remained with this unit until March 1941.

With the SS-Standarte Deutschland, SS–Hauptsturmführer (Captain) Kempin participated in the invasion of Poland and the subsequent operations in the West; receiving both classes of the Iron Cross. Kempin remained with this unit until March 1941 when he was transferred to the SS-Regiment Der Führer where he served first with the 13.Kompanie and later with the II.Battalion under future SS- Brigadeführer Heinz Harmel. Unfortunately, on 3 September 1941 he was seriously wounded by shrapnel from a grenade and was hospitalized until December 1941. After recovering from his injuries Hans Kempin returned to the field with the Der Führer. However, on 1 February 1942 instead of continuing on with his old regiment, Kempin was transferred as an instructor to the SS-Junkerschule at Bad Tölz and later also to SS-Junkerschule Braunschweig, and finally to Waffen-SS Unterführerschule in Posen-Treskau.

On 1 December 1943, he was promoted to SS- Obersturmbannführer (Lieutenant Colonel) and two months later received command of the Waffen-SS Unterführerschule located in Laibach (Ljubljana). He remained its commander until late February 1945, when he was assigned to lead first the 547. Volksgrenadier-Division then the newly formed 38. SS-Grenadierdivision Nibelungen and finally the 32.SS-Freiwilligen-Grenadier-Division 30.Januar. Together with the remnants of 30.Januar, SS-Standartenführer Hans Kempin surrendered to the Americans on 8 May 1945. After the war he worked in agriculture and owned one of the most technically advanced farms in Germany. Hans Kempin died on 30 November 1992 at the age of 79. On 25 July 1938, Kempin married Gustel Westphal and together they had one son and one daughter.