Paula Dean Broadwell (née Kranz; born November 9, 1972) is an American writer, academic, and anti-terrorism professional. She is the co-author with Vernon Loeb of All In: The Education of General David Petraeus, a biography of then International Security Assistance Force commander David Petraeus. 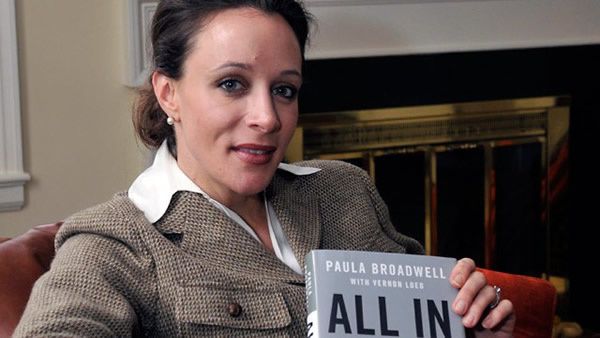 On November 9, 2012, she was reported to have been involved in an extramarital affair with Petraeus that triggered his resignation as Director of the CIA when it was discovered by the FBI. Born and raised as Paula Kranz in Bismarck, North Dakota, she attended Century High School, where she was homecoming queen, valedictorian of the class of 1991, and an All-State basketball player. Her parents, Paul and Nadene Kranz, divorced when she was a teenager. Paul was a high school basketball coach. In 2006 she was inducted into the Century High school hall of fame.

Broadwell graduated from the United States Military Academy at West Point in 1995. She majored in political geography. She earned a master's degree in international security from the University of Denver's Josef Korbel School of International Studies in 2006. She earned a Master of Public Administration from the John F. Kennedy School of Government at Harvard University in 2008. The Washington Post has reported that Broadwell had earlier (2007) been asked to withdraw from Harvard's PhD program, as her coursework reportedly did not meet the university's standards. Broadwell is a Research Associate in the Kennedy School's Center for Public Leadership Fellows. In 2008, she entered the PhD program at Department of War Studies at King's College London.

Broadwell served in the United States Army and the United States Army Reserve. She was promoted to lieutenant colonel in the Reserves in August 2012. Broadwell was Deputy Director of the Jebsen Center for Counter-Terrorism Studies at The Fletcher School of Law and Diplomacy at Tufts University. She also worked with the FBI Joint Terrorism Task Force. In 2006, shortly before meeting Petraeus, Broadwell applied for a job with the FBI. A retired FBI agent quoted by The Daily Beast has suggested that the FBI would have been very impressed with her qualifications and experience. The FBI offered her a job, but Broadwell decided instead to go to Harvard University.

Broadwell met Petraeus in 2006 when he was a speaker at the Kennedy School of Government at Harvard University. She was a graduate student at the time. According to the Charlotte Observer, she told him about her research interests after he spoke. He handed her his card and offered his help. She began a doctoral dissertation that included a case study of his leadership, with Petraeus fully cooperating. Broadwell then co-authored a biography of Petraeus, All In: The Education of General David Petraeus, with Vernon Loeb that was published in January 2012. The writer Joshua Foust has challenged the accuracy of Broadwell's account of the US destruction of the Afghan village of Khosrow Sofla.

Broadwell has also written for the New York Times and the Boston Globe. Her public speaking engagements have included addressing a group of Republican women in October 2012 organized by the then Colorado House Majority Leader Amy Stephens. In June 2009 and June 2011 Broadwell attended meetings on Afghanistan-Pakistan policy in the Eisenhower Executive Office Building, which is part of the White House complex. Broadwell is married to Dr. Scott Broadwell, an interventional radiologist who graduated from George Washington University School of Medicine in 1996. They reside in Charlotte, North Carolina, and have two young sons. Scott Broadwell and his future wife Paula Kranz met in 2000 when they were both active duty US Army captains. He was then a physician and commander of the Mannheim military clinic in Germany. Paula Kranz was in military intelligence. They were married in Heidelberg Castle with Lt. Col. Ronald Leininger, a Protestant Army chaplain officiating.

About May 2012 Jill Kelley began to receive emails that she considered to be threatening and harassing. She contacted the FBI, which traced the emails to Broadwell. The emails reportedly indicated that Broadwell suspected Kelley of starting an affair with General David Petraeus, who was a friend of Kelley's. Although the sending of the emails was deemed to be insufficient grounds for a criminal charge, the FBI called Broadwell in for questioning, at which time she admitted to the affair with Petraeus. After Broadwell turned over her computer, classified documents were found, which led to further FBI scrutiny of her relationship with Petraeus. Although Petraeus was not identified as the provider of the documents, the affair was revealed in early November 2012 and was cited by Petraeus as the reason for his resignation on November 9.

When the news of the scandal became public, Paula Broadwell spent time away from her husband and family secluded in Washington D.C. at her brother's home while her home in Charlotte, North Carolina was being searched by the FBI. She subsequently returned home to be with her husband and children. The media have taken note of how Scott and Paula Broadwell have tried to get back to normal life.  Following the revelations about her relationship with Petraeus, Broadwell has retained the services of former Clinton Press Secretary Dee Dee Myers with the public relations firm The Glover Park Group. The founders of The Glover Park Group have previously served as officials in the Clinton White House and on the presidential campaign of former vice president Al Gore. The firm's services include public relations, advertising, marketing, government relations and policy counsel, crisis management and opinion research. It was announced December 18, 2012, the United States Department of Justice will not charge Broadwell with cyberstalking.