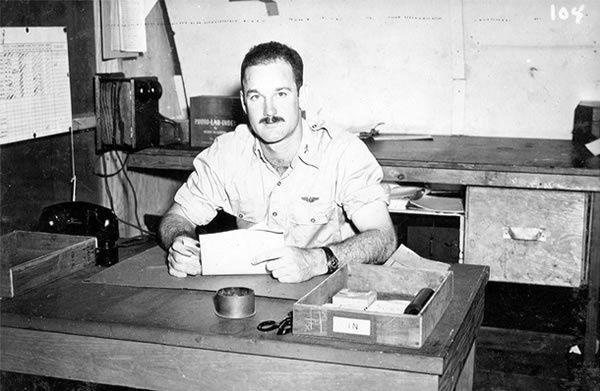 Thomas Wilson Ferebee was born on a farm outside Mocksville, North Carolina, as the third of eleven children. In 1935, at age 17, he attended Lees-McRae College in Banner Elk, NC. Talented in athletics since childhood, he earned awards in track, basketball, and football. After training for a small position with the Boston Red Sox and not making the team, he joined the Army. A knee injury kept him from service in the infantry but he was accepted into flight training. After two years of flight school, Ferebee was assigned as a bombardier in the European theater, completing more than 60 bombing missions.

In the summer of 1944, he was recruited by Colonel Paul Tibbets to be part of the 509th Composite Group which was formed to deliver the atomic bomb. After the war, he remained in the Air Force until December 1970. After he retired from the Air Force, he worked as a real estate agent in and around Orlando, Florida. Like Tibbets, Ferebee never expressed regret for his role in the bombing, saying "it was a job that had to be done."

Like Tibbets, Ferebee remained in the military in the years after World War II as the U.S. Army Air Forces became the U.S. Air Force. Ferebee spent most of his USAF career in the Strategic Air Command, serving during the Cold War and in Vietnam. He retired from the U.S. Air Force as a Master Navigator (bombardier) with the rank of Colonel. He died at his home in Windermere, Florida at the age of 81. He was survived by his wife, Mary Ann Ferebee, who donated his collection of military documents and objects to the North Carolina Museum of History in Raleigh.