The Commission on the Intelligence Capabilities of the United States Regarding Weapons of Mass Destruction is a panel created by Executive Order 13328, signed by U.S. President George W. Bush in February 2004. 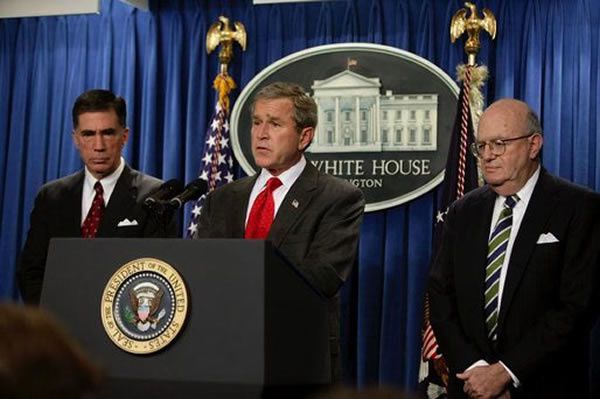 The impetus for the Commission lay with a public controversy occasioned by statements, including those of Chief of the Iraq Survey Group, David Kay, that the Intelligence Community had grossly erred in judging that Iraq had been developing weapons of mass destruction (WMD) before the March 2003 start of Operation Iraqi Freedom. President Bush therefore formed the Commission, but gave it a broad mandate not only to look into any errors behind the Iraq intelligence, but also to look into intelligence on WMD programs in Afghanistan and Libya, as well as to examine the capabilities of the Intelligence Community to address the problem of WMD proliferation and "related threats."

The Commission's report also described systemic analytical, collection, and dissemination flaws that led the intelligence community to erroneous assessments about Iraq's alleged WMD programs. Chief among these flaws were "an analytical process that was driven by assumptions and inferences rather than data", failures by certain agencies to gather all relevant information and analyze fully information on purported centrifuge tubes, insufficient vetting of key sources, particularly the source "Curveball," and somewhat overheated presentation of data to policymakers. The 601-page document detailed many U.S. intelligence failures and identified intelligence breakdowns in dozens of cases. Some of the conclusions reached by the report were:

The report also looked forward, recommending a large number of organizational and structural reforms. Of the 74 recommendations to the President, he fully accepted 69 in a public statement released on June 29, 2005. The Commission's mission is, in part, "to ensure the most effective counter-proliferation capabilities of the United States and response to the September 11, 2001, terrorist attacks and the ongoing threat of terrorist activity." With regard to Iraq, the commission was meant to "specifically examine the Intelligence Community's intelligence prior to the initiation of Operation Iraqi Freedom and compare it with the findings of the Iraq Survey Group and other relevant agencies or organizations concerning the capabilities, intentions, and activities of Iraq relating to the design, development, manufacture, acquisition, possession, proliferation, transfer, testing, potential or threatened use, or use of Weapons of Mass Destruction and related means of delivery."

The first seven members of the panel were appointed on February 6, 2004, the date of the executive order which created it. The final two members, Vest and Rowen, were appointed on February 13. Days before the American commission was announced, the government of the United Kingdom, the U.S.'s primary ally during the Iraq War, announced a similar commission to investigate British intelligence, known as the Butler Inquiry or the Butler Review. The commission was independent and separate from the 9-11 Commission.