Karl-Heinz Keitel (born 2 January 1914, date of death unknown) was a Sturmbannführer (Major) in the Waffen-SS during World War II. 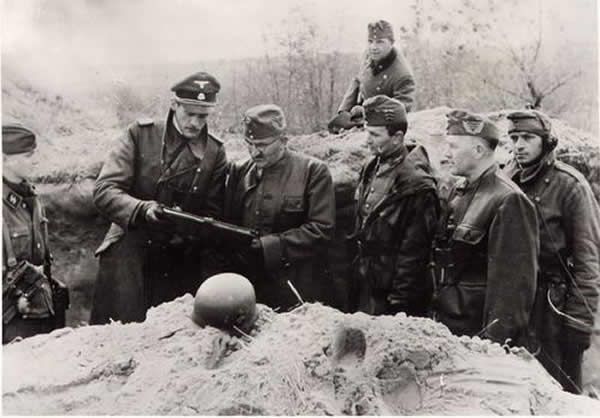 Karl-Heinz Keitel was born on 2 January 1914, in Wolfenbüttel, the eldest son of Wilhelm Keitel who would rise to become Chief of the OKW, the German Military High Command, during World War II. Karl-Heinz joined the Heer in 1934 and served in various cavalry units following the outbreak of war in 1939. In June 1943 he was assigned to the Kavallerie-Schule in Potsdam-Krampnitz, and served as a battalion commander, and later the regimental commander of the Kavallerie-Regiment Nord. On 5 August 1944, he transferred into the Waffen-SS and served with the 22. SS-Freiwilligen-Kavallerie-Division “Maria Theresia”.

On 20 October of that year, he was promoted to command SS-Freiwilligen-Kavallerie-Regiment 17 / 22.SS-Freiwilligen-Kavallerie-Division "Maria Theresia" in the area of Hungary. In November 1944, combined with the Florian Geyer division, the "Maria Theresia" was assigned to the garrison of Budapest. On 12 December he was wounded in action while defending against Red Army probing attacks into Budapest for which he was awarded the Wound Badge in Black.

In March he transferred to the 37. SS-Freiwilligen-Kavallerie-Division “Lützow” as its commander, and led the 2000 strong remnants of the division in heavy fighting around Wiener-Neustadt as part of 6. SS-Panzer Armee. He was reportedly promoted Obersturmbannführer (Lieutenant Colonel) in the closing months of the war, but this has never been confirmed and is not recorded in his service records; a quite common occurrence in the final days of the Third Reich.

On 20 October 1938, he married Dorothee von Blomberg, daughter of Werner von Blomberg. Together they had one son (Hans-Christof, born 23 July 1939) and three daughters (Sybilla, born 17 December 1940; Jutta, born 14 May 1942; and Stephanie, born 26 December 1943). At the time of the marriage, his father Wilhelm Keitel made no attempt to hide the fact that through the engagement of his son to Blomberg's daughter, he was working towards an entente with his superior, Field-Marshal von Blomberg himself.