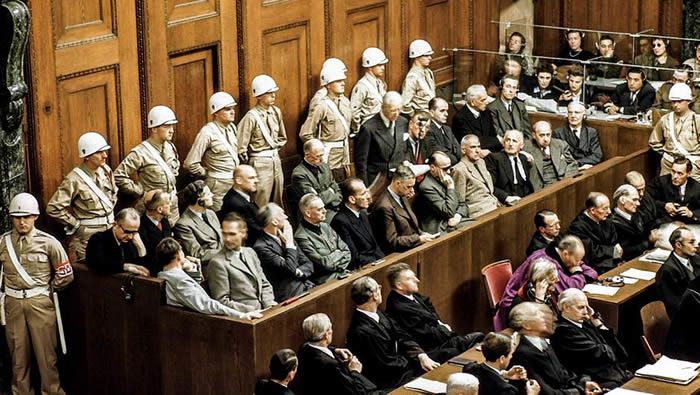 Von Papen is indicted under Counts One and Two. He was appointed Chancellor of the Reich on 1st June, 1932, and was succeeded by von Schleicher on 2nd December, 1932. He was made Vice Chancellor in the Hitler Cabinet on 30th January, 1933, and on 13th November, 1933, Plenipotentiary for the Saar. On 26th July, 1934, he was appointed Minister to Vienna, and was recalled on 4th February, 1938. On 29th April, 1939, he was appointed Ambassador to Turkey. He returned to Germany when Turkey broke off diplomatic relations with Germany in August, 1944.

Von Papen was active in 1932 and 1933 in helping Hitler to form the Coalition Cabinet and aided in his appointment as Chancellor on 30th January, 1933. As Vice Chancellor in that Cabinet he participated in the Nazi consolidation of control in 1933. On 16th June, 1934, however, von Papen made a speech at Marburg which contained a denunciation of the Nazi attempts to suppress the free press and the church, of the existence of a reign of terror, and of " 150 per cent Nazis " who were mistaking " brutality for vitality ". On 30th June, 1934, in the wave of violence which accompanied the so-called Roehm Purge, von Papen was taken into custody by the SS, his office force was arrested, and two of his associates including the man who had helped him work on the Marburg speech, were murdered. Von Papen was released on 3rd July, 1934.

Notwithstanding the murder of his associates, von Papen accepted the position of Minister to Austria on 26th July, 1934, the day after Dollfuss had been assassinated. His appointment was announced in a letter from Hitler which instructed him to direct relations between the two countries "into normal and friendly channels " and assured him of Hitler's complete and unlimited confidence." As Minister to Austria, von Papen was active in trying to strengthen the position of the Nazi Party in Austria for the purpose of bringing about Anschluss. In early 1935 he attended a meeting in Berlin at which the policy was laid down to avoid everything which would give the appearance of German intervention in the internal affairs of Austria. Yet he arranged for 200,000 marks a month to be transmitted to "the persecuted National Socialist sufferers in Austria ". On 17th May, 1935, he reported to Hitler the results of a conference with Captain Leopold, the Leader of the Austrian Nazis, and urged Hitler to make a statement recognising the national independence of Austria, and predicting that the result might be to help the formation of a coalition between Schuschnigg's

Christian Socialists and the Austrian Nazis against Starhemberg. On 27th July, 1935, von Papen reported to Hitler that the union of Austria and Germany could not be brought about by external pressure but only by the strength of the National Socialist Movement. He urged that the Austrian Nazi Party change its character as a centralised Reich German Party and become a rallying point for all National Germans.

Von Papen was involved in occasional Nazi political demonstrations, supported Nazi propaganda activities and submitted detailed reports on the activities of the Nazi Party, and routine reports relating to Austrian military defences. His Austrian policy resulted in the agreement of 11th July, 1936, which nominally restored relations between Germany and Austria to " normal and friendly form", but which had a secret supplement providing for an amnesty for Austrian Nazis, the lifting of censorship on Nazi papers, the resumption of political activities by Nazis and the appointment of men friendly to the Nazis in the Schuschnigg Cabinet.

After the signing of this agreement von Papen offered to resign but his resignation was not accepted. Thereafter he proceeded to bring continued pressure on the Austrian Government to bring Nazis into the Schuschnigg Cabinet and to get them important positions in the Fatherland Front, Austria's single legal party. On 1st September, 1936, von Papen wrote Hitler advising him that anti-Nazis in the Austrian Ministry of Security were holding up the infiltration of the Nazis into the Austrian Government and recommended bringing " slowly intensified pressure directed at changing the regime ".

On 4th February, 1938, von Papen was notified of his recall as Minister to Austria, at the same time that von Fritsch, von Blomberg and von Neurath were removed from their positions. He informed Hitler that he regretted his recall because he had been trying since November, 1937, to induce Schuschnigg to hold a conference with Hitler and Schuschnigg had indicated his willingness to do so. Acting under Hitler's instructions, von Papen then returned to Austria and arranged the conference which was held at Berchtesgaden on 12th February, 1938. Von Papen accompanied Schuschnigg to that conference and at its conclusion advised Schuschnigg to comply with Hitler's demands On 10th March, 1938, Hitler ordered von Papen to return to Berlin. Von Papen was in the Chancellery on 11th March when the occupation of Austria was ordered. No evidence has been offered showing that von Papen was in

favour of the decision to occupy Austria by force, and he has testified that he urged Hitler not to take this step.

After the annexation of Austria von Papen retired into private life and there is no evidence at he took any part in politics. He accepted the position of Ambassador to Turkey in April 1939 but no evidence had been offered concerning his activities in that position implicating him in crimes.

The evidence leaves no doubt that von Papen's primary purpose as Minister to Austria was to undermine the Schuschnigg regime and strengthen the Austrian Nazis for the purpose of bringing about Anschluss. To carry through this plan he engaged in both intrigue and bullying. But the Charter does not make criminal such offences against political morality, however bad these may be. Under the Charter von Papen can be held guilty only if he was a party to the planning of aggressive war. There is no showing that he was a party to the plans under which the occupation of Austria was a step in the direction of further aggressive action, or even that he participated in plans to occupy Austria by aggressive war if necessary. But it is not established beyond a reasonable doubt that this was the purpose of his activity, and therefore the Tribunal cannot hold that he was a party to the common plan charged in Count One or participated in the planning of the aggressive wars charged under Count Two.

The Tribunal finds that von Papen is not guilty under this Indictment, and directs that he shall be discharged by the Marshal, when the Tribunal presently adjourns.