Maria Anna Schicklgruber (15 April 1795 – 7 January 1847) was the mother of Alois Hitler, and the grandmother of Adolf Hitler. 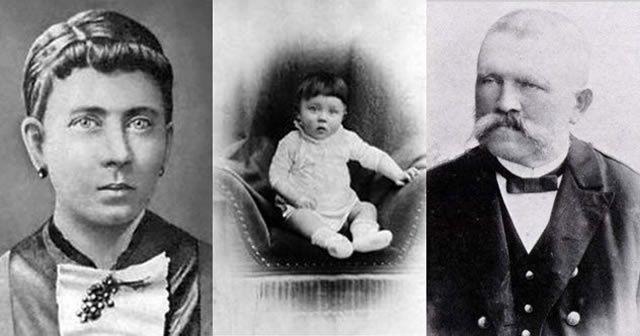 Maria was born in the village of Strones in the Waldviertel region of Archduchy of Austria. She was the daughter of Theresia Pfeisinger (7 September 1769 – 11 November 1821), and farmer Johannes Schicklgruber (29 May 1764 – 12 November 1847). Maria was a Catholic; what is known about her is based on church and other public records. Maria was one of 11 children, only six of whom survived infancy. Her early life was that of a poor peasant child in a rural forested area, in the northwest part of Lower Austria, northwest of Vienna. In 1821, Maria's mother died when Maria was 26. She received an inheritance of 74.25 gulden, which she left invested in the Orphans' Fund until 1838. By that time it had more than doubled to 165 gulden.

At that time, a breeding pig cost 4 gulden, a cow 10–12 gulden and an entire inn 500 gulden. Werner Maser wrote she was a "thrifty, reserved, and exceptionally shrewd peasant woman." Other than saving her inheritance, which indicates she was not destitute during that period of her life, little is known about Maria's life until she was over 40. In 1837, when she was 42 years old, and still single, her first and only child was born. She named the boy Alois. Maser notes that she refused to reveal who the child's father was, so the priest baptized him Alois Schicklgruber and entered "illegitimate" in place of the father's name on the baptismal register. Historians have discussed three candidates for the father of Alois:

At the time of his birth, she was living with a Strones village family by the name of Trummelschlager. Mr and Mrs Trummelschlager were listed as godparents to Alois. Maria soon took up residence with her father at house number 22 in Strones. After an unknown period, the three Schicklgrubers were joined by Johann Georg Hiedler, an itinerant journeyman miller. On 10 May 1842, five years after Alois was born, Maria Anna Schicklgruber married Johann Georg Hiedler in the nearby village of Döllersheim. Maria was 47, her new husband was 50. Whether or not Johann Georg Hiedler was actually the biological paternal grandfather of Hitler will remain unknown as he was not put as the father on Alois's birth certificate. Illegitimacy was common in lower Austria; in some areas it reached up to forty percent and as late as 1903 the figure was twenty-four percent, with the children normally legitimized at a later date. Hitler's ancestry came into question when his opponents began spreading rumors that his paternal grandfather was Jewish since one of Nazism's major principles was that to be considered a pure "Aryan" one had to have a documented ancestry certificate (Ahnenpass).

In 1931 Hitler ordered the Schutzstaffel (SS) to investigate the alleged rumors regarding his ancestry; they found no evidence of any Jewish ancestors. Hitler then ordered a genealogist by the name of Rudolf Koppensteiner to publish a large illustrated genealogical tree showing his ancestry. This was published in the book "Die Ahnentafel des Fuehrers" (The pedigree of the Leader) in 1937, which concluded that Hitler's family were all Austrian Germans with no Jewish ancestry and that Hitler had an unblemished "Aryan" pedigree. As Alois himself legitimized Johann Georg Hiedler as his biological father (with three witnesses supporting and watching this), and the priest changing the father's blank space on the birth certificate in 1876 this was considered certified proof for Hitler's ancestry, thus Hitler was considered an Aryan.

Maria died during the sixth year of her marriage, at the age of 51 in Klein-Motten where she was living with her husband in the home of kin, the Sillip family. She died of "consumption resulting from pectoral (thoracic) dropsy" in 1847. She was buried at the parish church in Döllersheim. After the Anschluss of Austria in 1938, a search failed to find her grave so she was given an "honour grave" next to the church wall. This grave was tended by local Hitler Youth groups whilst Döllersheim and the surrounding areas were made proving ground areas. In 1942, this area became part of an artillery training area and the local inhabitants were moved out. Military training continued under the Soviets after 1945, and also under the Austrian Army until about 1985, by which time most of the towns and villages were in ruins. The church at Döllersheim is now preserved and undergoing reconstruction. The cemetery is being tended, but there is no grave marker there now for Maria Schicklgruber. In 1940 Hitler's second cousin, Aloisia Veit, was gassed at Hartheim Euthanasia Centre. Veit, a 49-year-old schizophrenic, was killed as part of Action T4, the Nazi program to exterminate handicapped people.