Fenella Fielding, OBE (17 November 1927 – 11 September 2018) was an English stage, film and television actress, popular in the 1950s and 1960s and known as "England's first lady of the double entendre". She was known for her seductive image and distinctively husky voice. Fielding appeared in two Carry On films, Carry On Regardless (1961) and Carry On Screaming! (1966). 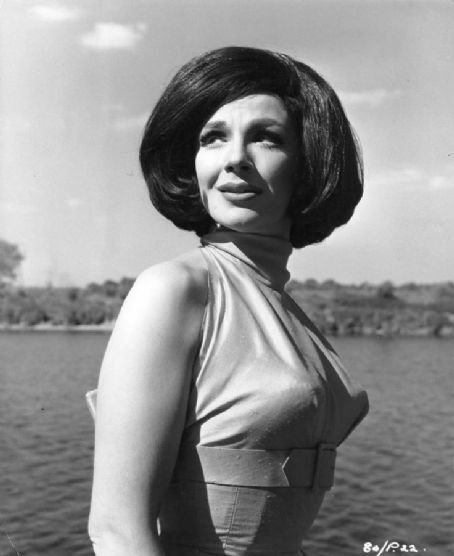 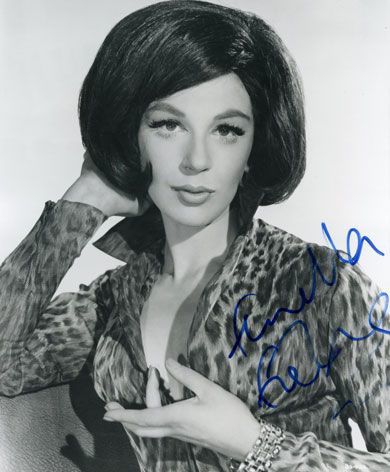 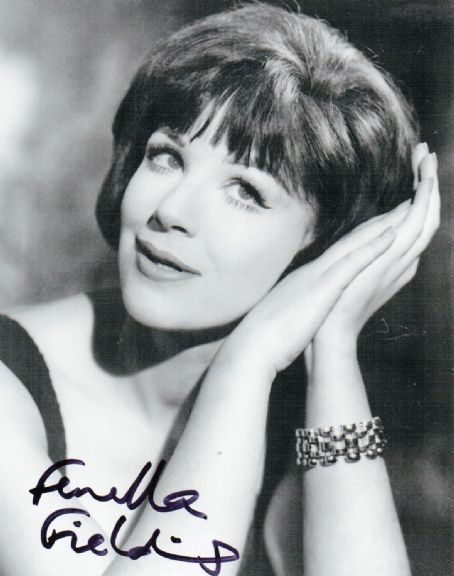 Fenella Marion Feldman was born on 17 November 1927 in Hackney, London, to a Romanian Jewish mother, Tilly (née Katz; 1902–1977), and a Lithuanian Jewish father, Philip Feldman. She was the younger sister of Basil, later Baron Feldman. She grew up in Lower Clapton and later Edgware where she attended North London Collegiate School. Her father at one time managed a cinema in Silvertown, east London. She later resided in Chiswick, west London. Fielding began her acting career in 1952, concentrating on stage productions. She was given her first break when she accompanied the then unknown actor Ron Moody to an audition (they had met in an amateur production at the London School of Economics). Her performance in Sandy Wilson's musical version of Valmouth made her a star in 1958. By 1959 she was appearing with Kenneth Williams in the comedy revue Pieces of Eight, written by Harold Pinter and Peter Cook. Fielding also guested in the Hancock's Half Hour episode "The Poetry Society" broadcast in December 1959.

Fielding starred in her own television programme Izeena (1966). She had occasional guest appearances in television programmes such as The Avengers (after being passed over as Patrick Macnee's regular partner in favour of Honor Blackman) and in Danger Man. She appeared in four episodes of Morecambe and Wise Show between 1969 and 1972. She was in two of the Carry On films, the second was her role as the vampish Valeria in Carry On Screaming! (1966), and three of the Doctor films (including Doctor in Clover). She interspersed these with performances in plays by Ibsen, Shakespeare and Henry James, reputedly keeping an edition of Plato's writings by her bed. Other theatre credits around this time included Sheridan and Chekhov. In 1977 she appeared on BBC TV's long running show, The Good Old Days performing riotously, 'Only a glass of champagne' and 'How'd you like to spoon with me', in her own unique and totally inimitable manner.

Fielding was the uncredited Village announcer in The Prisoner (1967–68), and co-starred with Tom Poston and Robert Morley in the remake of The Old Dark House (1963). In Dougal and the Blue Cat, based on The Magic Roundabout, she voiced the character of the Blue Voice—referred to as "Madam" by both Buxton (the blue cat of the title) and Dougal at various stages throughout the film. In the late 1960s, she was approached by Federico Fellini to work on one of his films, but turned the work down because she was already booked to perform on stage at the Chichester Festival Theatre. Fielding also starred in the children's television series Uncle Jack from 1990-1993 as the notorious villainess, The Vixen. In 1999, Fielding starred in Rik Mayall and Adrian Edmondson's film Guest House Paradiso. She toured in a production of Lady Windermere's Fan the same year. In 2011, Fielding appeared at the Jermyn Street Theatre, London in an English Chamber Theatre presentation of Jane McCulloch's Dearest Nancy, Darling Evelyn, the dramatised letters of Nancy Mitford and Evelyn Waugh.

From 2012, Fielding performed readings of English translations of Greek classics by David Stuttard. Her partners for this were Simon Russell Beale and later Stephen Greif. Her autobiography was published in both audio and book form in 2017 and led to a number of appearances on stage reading extracts from it. Fielding was appointed Officer of the Order of the British Empire (OBE) in the 2018 Birthday Honours for services to drama and charity. Fielding voiced 'MOOD', the quirky supercomputer in the video game Martian Gothic in a script written by science fiction author Stephen Marley. Since 2000 she has been recorded with Savoy, a book publishing and recording company. Her work with them includes readings of Colette, J.G. Ballard's Crash and T. S. Eliot's Four Quartets. She made an album of cover songs including Robbie Williams's "Angels", Kylie Minogue's "Can't Get You Out of My Head", New Order's "Blue Monday" and the White Stripes' "Passive Manipulation". In 2006, she toured Ireland in The Vagina Monologues. She provided the voice to two tracks on the Graham Roos album Quest.

In the following years, Fielding was a regular guest contributor on BBC Radio 4's PM and Broadcasting House. A 2007 article in The Independent remarked that it was "one of the mysteries of British life that Fenella Fielding, whose wit and distinctive stage presence captivated figures such as Kenneth Tynan, Noël Coward and Federico Fellini, should have drifted into obscurity rather than being celebrated", and the same article quotes The Times as saying that Fielding's performance as Hedda Gabler was "one of the experiences of a lifetime". A 2017 article in The Guardian highlighted a career "renaissance in recent years" and describes Fielding as a phenomenal storyteller. "She reminds me of the great raconteur Quentin Crisp – the same love of language, mastery of its rhythms, perfectly formed sentences, and a joie de vivre even when relating her profound despair." Fielding is the subject of MetaFenella, a contemporary public artwork by artist Martin Firrell. Fielding suffered a stroke on 25 August 2018 and died two weeks later at Charing Cross Hospital in Hammersmith, on 11 September 2018, aged 90. She never married or had children.