Robert Roger Porter (born October 25, 1977) is an American lawyer and former political aide who served as White House Staff Secretary for President Donald Trump from January 20, 2017, until February 7, 2018. He was previously Chief of Staff for U.S. Senator Orrin Hatch of Utah. Porter resigned his position as White House Staff Secretary after domestic abuse allegations from both of his former wives came to public attention. He was succeeded on an acting basis by Derek Lyons. 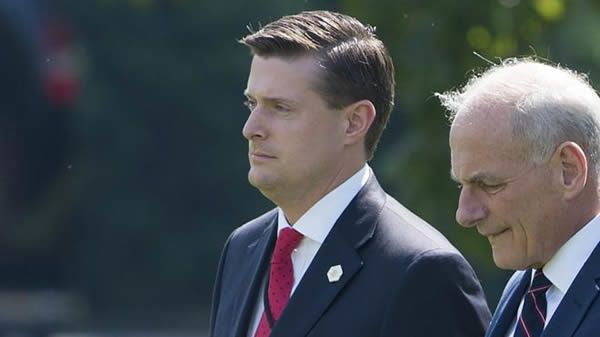 Porter grew up in Belmont, Massachusetts, and Washington, D.C. He is the son of Roger B. Porter, a former aide to President George H. W. Bush and currently IBM Professor of Business and Government at Harvard University. Porter's mother Ann Porter, who died in May 2017, was Faculty Dean of Harvard's Dunster House dormitory. After graduating from high school, Porter interned in the U.S. Senate. He attended Harvard University, where he studied government and was president of the Harvard Republican Club. After his freshman year at Harvard, he began a two-year stint as a Mormon missionary in London. During the summer of his junior year, Porter completed an internship at the White House and worked for the Domestic Policy Council. He graduated in 2002. Porter was a Rhodes Scholar, studying Political Theory at the University of Oxford, where his thesis research focused on C.S. Lewis prior to graduation in 2005. Porter then attended Harvard Law School, graduating in 2008, with his Juris Doctorate. Prior to beginning federal employment, according to his LinkedIn profile, Porter was an associate attorney for the Sidley Austin law firm from April 2010 to January 2011.

Porter has worked for Senators Rob Portman and Mike Lee. In March 2014, Porter began working for Senator Orrin Hatch. Porter was initially appointed Deputy Chief of Staff and was promoted to Chief of Staff in June of that year. Porter left the role in January 2017, to become White House Staff Secretary for President Donald Trump. Porter became White House Staff Secretary for President Donald Trump on January 20, 2017. Porter resigned from the position on February 7, 2018, following public allegations of spousal abuse from his two ex-wives, Colbie Holderness and Jennifer Willoughby. The allegations were supported by photographs of a black eye (which Porter claimed he took) and a restraining order. Porter has said the allegations are false and are part of a "coordinated smear campaign". The Washington Post reported that White House counsel Donald McGahn had known since January 2017 about the allegations Porter's ex-wives made to the FBI, and that Chief of Staff John F. Kelly had known about the allegations since October 2017, still promoting Porter after. Post reporter Aaron Blake wrote that this development made the allegations a "full-blown scandal".

Asked by reporters two days after Porter's resignation, President Donald Trump commented, "He said very strongly yesterday that he's innocent so you have to talk to him about that, but we absolutely wish him well, he did a very good job when he was at the White House." In mid-February 2018, it was reported that Senator Hatch had sent letters to Porter's former wives, apologizing for initially defending Porter in response to their accusations against him. Kelly told reporters on March 2, 2018 that he sought Porter's resignation immediately after learning of the accusations on February 6 and regretted his handling of Porter's departure; he also said that contrary to earlier White House statements, Porter's background check had been completed by the FBI, as had been disputed publicly by bureau director, Christopher Wray.  In 2003, Porter married Colbie Holderness; they divorced in 2008 and she said he had physically abused her multiple times throughout their marriage. In 2009, he married Jennifer Willoughby. After repeated verbal abuse, she obtained a restraining order against him in 2010. They divorced in 2013. Porter has been dating now former White House Director of Communications Hope Hicks.

He is a member of the Church of Jesus Christ of Latter-day Saints (Mormon Church). He was raised a member of the church and served a full-time 24-month mission. He became less active in Mormonism around the time of his second divorce. Both of his ex-wives are Mormon, but he has commented that if he marries a third time, he will not marry another Mormon woman. Both of Porter's ex-wives accused him of physical and emotional abuse in February 2018 interviews published by Daily Mail. Photographs of Holderness with a black eye and her detailed accounts of Porter's alleged abuse were also made public. In late November 2017, a girlfriend of Porter's had also alerted her friend, White House Counsel Don McGahn, regarding Porter's "anger problems". Ex-wife Willoughby had sought and received a three-day emergency protective order against him in June 2010. Despite their testimonies and evidence presented, Porter denied his ex-wives' allegations and resigned from his staff secretary post after they became public. In February 2018, Willoughby told the Daily Mail, that Porter was verbally abusive to her and pulled her out of the shower in 2010. She stated "I don't want to be married to him. I would not recommend anyone to date him or marry him. But I definitely want him in the White House and the position he is in. I think his integrity and ability to do his job is impeccable."