In February 1933, Adolf Hitler had only a tenuous grasp on power. Chancellor of Germany for merely four weeks, he led a fragile coalition government. The Nazis had lost seats in the Reichstag in the recent election, and claimed only three of thirteen cabinet posts. Then on February 27th, arson sent the Reichstag, the home and symbol of German democracy, up in flames.

Immediately blaming the Communists, Hitler's new government approved a decree that tore the heart out of the democratic constitution of the Weimar Republic and cancelled the rule of law. Five thousand people were immediately arrested. The Reichstag fire marked the true beginning of the Third Reich, which ruled for 12 more years. The controversy surrounding the fire's origins has endured for 80.

In Burning the Reichstag, Benjamin Hett offers a gripping account of Hitler's rise to dictatorship-one that challenges orthodoxy and recovers the true significance of the part the fire played. At the scene the police arrested 23-year-old Marinus van der Lubbe, a Dutch Communist stonemason. Though he was initially dismissed abroad as a Nazi tool, post-war historians since the 1950s have largely judged him solely guilty-a lone arsonist exploited by Hitler.

Hett's book reopens the case, providing vivid portraits of key figures, including Rudolf Diels, Hermann Goering, Joseph Goebbels, and the historian Fritz Tobias, whose account of the fire has, until now, been the standard. Making use of a number of new sources and archives, Hett sets the Reichstag fire in a wider context, revealing how and why it has remained one of the last mysteries of the Nazi period, and one of the most controversial and contested events in the 20th century. Burning the Reichstag will stand as the landmark work on this subject. 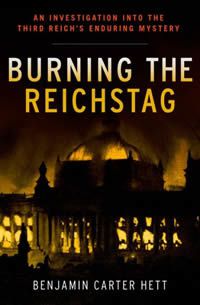 Historian Hett (Crossing Hitler) applies his dual expertise as a scholar and former trial lawyer to reopen discussion of an aspect of Nazi Germany widely considered settled: who set the Reichstag on fire in 1933? The research of such historians as Fritz Tobias and Hans Mommsen have contributed to a general consensus that the fire, which inaugurated the final stage of Hitler’s seizure of power, was the work of one man: Dutch Communist Martinus van der Lubbe. This was as the Nazis claimed—that the fire was the work of the Comintern. But the Communists contended that the arson was linked to the Nazis, and the issue is still debated today.

Hett, using fresh sources and archives, presents a nuanced and complex perspective. In his telling, the fire emerges as “a tale launched, shaped, and reshaped by power and interest,” right down to the present day. Hett painstakingly reconstructs the roots of the “rival narratives” about the fire that “snapped into place literally overnight.” He is equally precise in demonstrating the dynamics of van der Lubbe’s trial (ultimately, he was beheaded), and in raising the still-opaque question of direct Nazi involvement in the fire’s setting. Hett’s major contribution is his analysis of the trial as a case study in “a particular constellation of political pressure and the state of knowledge of Nazi crimes” in West Germany during the 1950s and 60s. (Jan.)

Meet the Author Benjamin Carter Hett, a former trial lawyer and professor of history at Hunter College and the Graduate Center, City University of New York, is the author of Death in the Tiergarten and Crossing Hitler, winner of the Fraenkel Prize.