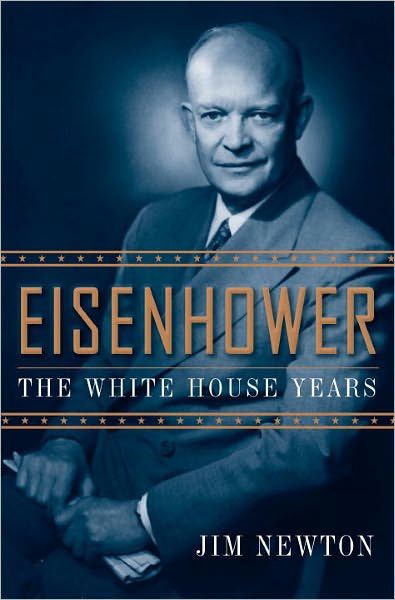 “Newton's contribution is as cogent an inventory of Eisenhower's White House years as I've ever read. He blends masterful writing with historic detail and provides the value-added of Ike as the man and the leader.” —Chuck Hagel, Distinguished Professor, Georgetown University; U.S. Senator (1997–2009). Newly discovered and declassified documents make for a surprising and revealing portrait of the president we thought we knew.

America’s thirty-fourth president was belittled by his critics as the babysitter-in-chief. This new look reveals how wrong they were. Dwight Eisenhower was bequeathed the atomic bomb and refused to use it. He ground down Joseph McCarthy and McCarthyism until both became, as he said, "McCarthywasm." He stimulated the economy to lift it from recession, built an interstate highway system, turned an $8 billion deficit in 1953 into a $500 million surplus in 1960. (Ike was the last President until Bill Clinton to leave his country in the black.)

The President Eisenhower of popular imagination is a benign figure, armed with a putter, a winning smile, and little else. The Eisenhower of veteran journalist Jim Newton's rendering is shrewd, sentimental, and tempestuous. He mourned the death of his first son and doted on his grandchildren but could, one aide recalled, "peel the varnish off a desk" with his temper. Mocked as shallow and inarticulate, he was in fact a meticulous manager. Admired as a general, he was a champion of peace. In Korea and Vietnam, in Quemoy and Berlin, his generals urged him to wage nuclear war. Time and again he considered the idea and rejected it. And it was Eisenhower who appointed the liberal justices Earl Warren and William Brennan and who then called in the military to enforce desegregation in the schools.

Rare interviews, newly discovered records, and fresh insights undergird this gripping and timely narrative. JIM NEWTON is a veteran journalist who began his career as clerk to James Reston at the New York Times. Since then, he has worked as a reporter at the Atlanta Constitution and as a reporter, bureau chief and editor at the Los Angeles Times, where he presently is the editor-at-large and author of a weekly column. He also is an educator and author, whose acclaimed biography of Chief Justice Earl Warren, Justice for All: Earl Warren and the Nation He Made, was published in 2006. He lives in Pasadena, CA.

The political skills Dwight Eisenhower honed while commanding a fractious WWII alliance made for a great presidency, according to this appreciative but also probing biography. L.A. Times editor-at-large Newton lauds the 34th president's "middle way" rejecting extremes of left and right—including the anti–New Deal ravings of his ultra-conservative brother and the anticommunist witch hunts of fellow Republican Joseph McCarthy—to extract peace and prosperity during the turbulent 1950s. At home, Newton notes, Eisenhower steered a fiscally responsible course between Democratic domestic spending and Republican tax cuts and military boondoggles, while initiating a colossal interstate highway system.

He championed a massive nuclear deterrent, but resisted pressures to use it and persistently defused geopolitical crises. The Eisenhower-approved coups in Iran and Guatemala were exceptions of which Newton provides trenchant critical accounts. Eisenhower's timid middleism on civil rights looks uglier, but Newton (Justice for All: Earl Warren and the Nation He Made) notes that, once the courts ruled, Ike took his marching orders and sent troops to enforce school desegregation. Drawing on declassified documents, Newton's narrative, especially of the many international crises, is clear, brisk, and insightful, a timely study of a master of consensus politics with lessons for today's polarized Washington. (Sept.)

Jim Newton is a veteran journalist who began his career as clerk to James Reston at the New York Times. Since then, he has worked as a reporter, bureau chief and editor of the Los Angeles Times, where he presently is the editor-at-large. He also is an educator and author, whose acclaimed biography of Chief Justice Earl Warren, Justice for All, was published in 2006. He lives in Pasadena, CA.