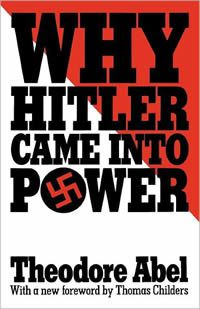 In 1934 Theodore Abel went to Germany and offered a prize, under the auspices of Columbia University, for autobiographies of members of the National Socialist movement. The six hundred essays he received constitute the single best source on grassroots opinion within the Nazi Party, and they form the empirical foundation for Abel's fascinating yet curiously neglected 1938 book.

Although a number of scholars have drawn on these reports, Abel's own treatment has never been surpassed. Of particular value is his presentation of the life histories of a worker, a soldier, an anti-Semite, a middle-class youth, a farmer, and a bank clerk, all of whom explain in their own words why they joined the NSDAP. In the vast literature on National Socialism, no more useful or revealing testimony exists.

In a new Foreword, Thomas Childers discusses how the past half-century of research and writing on Nazi Germany has uphold Abel's original insights into the broad appeal of the National Socialist movement, thereby reaffirming this work's enduring value for students of the topic.

One year after Hitler's appointment as chancellor, Theodore Abel, a Columbia University sociologist, went to Germany and offered small cash prizes for political autobiographies by Nazi party members. With the cooperation of the government, he was able to collect about seven hundred essays...It was on the basis of an analysis of these documents that Why Hitler Came Into Power was written. Now, half a century later, this book is still very much worth reading. More than a testimony to the excellence of some of the early efforts at describing the Nazi phenomenon...Abel's study is at the heart of the current debates on fascism, national socialism, and the coming of Hitler to power.

The book's main purpose is to measure, in the light of the author's unique personal data, the relative importance of each of the main factors to which [Hitler's] rise to power has hitherto been ascribed, including Hitler's own leadership, the strategy of the party tacticians, and the favorable circumstances of popular discontent. The results are highly important...There can...be no doubt that the book makes one of the most original contributions to an understanding of Nazism which has yet been written.