Konrad Morgen was born on the 8 June 1908 in Frankfurt –am – Main, the son of a railroad worker. He chose a career in the legal profession and graduated from the University of Frankfurt and The Hague Academy of International Law, and became a judge in Stettin. 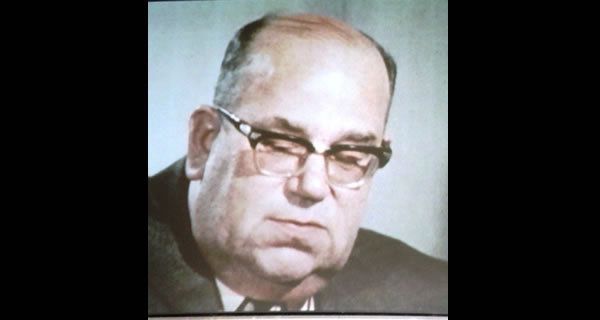 Konrad Morgen from a 1972 interview

He was posted to the Hauptamt SS- Gericht (the main office of the legal department) in Krakow and was responsible for investigating cases of corruption, his tenacity in prosecuting the course of justice earned him the nickname "The Bloodhound Judge".

After a disagreement with Freidrich Wilhelm Kruger – Higher SS and Police Leader East he was posted to the front-line to serve in the SS Wiking Division, but in 1943 he was re-assigned to the ReichsKriminalPolizeiAmt (RKPA) to investigate financial crimes, and was now an Oberstrurmfuhrer.

In July 1943 Morgen investigated alleged corruption and irregularities at the Buchenwald Concentration camp in Weimar. Karl Otto Koch the commandant was investigated, as was his wife Ilse, and Koch was found guilty and executed by the SS on the 26 April 1945.

Also in the summer of 1943 Morgen and a team of Kriminalpolizei officers were sent from Berlin to Lublin, following information sent by Johannes Muller, commander of the Sicherheitspolizei in Lublin, who had heard of a Jewish wedding at a camp attended by over 1,000 guests, including members of the SS.

Morgen’s enquiries led him to a camp – described to him in Lublin as “impenetrable and mysterious” – this camp was the death camp at Sobibor where he found Wirth.

To his astonishment, Wirth admitted responsibility for the Jewish wedding at the death camp. Morgen asked what all these Jews and the SS unit were doing there at Sobibor, anyway.

Wirth then disclosed to Morgen that on the orders of the Fuhrer he was carrying out the extermination of the Jews. Morgen, nonplussed asked “what this had to do with the Jewish wedding?”

Wirth then explained to Morgen the huge deception operation he had organised in the three Aktion Reinhard death camps where Jewish workers were employed in the extermination and seizure of their property.

Wirth further explained that he had “given them every freedom, so to speak, given them a financial share in the exploitation of the victims.” In this way he had allowed the Jewish wedding to take place.

At first Morgen thought Wirth’s story of mass –extermination in the death camps to be pure fantasy, until he went to the “Alter Flugplatz” camp near Majdanek and discovered that not only was this the depot where the victims personal belongings were sent from Belzec, Sobibor and Treblinka death camps, but also Wirth’s headquarters.

“It was a camp which held the belongings, or a part of the belongings of the victims. Because of the extent of this – there were unheard of piles of watches stacked up there – I had to realise that something monstrous was going on here.

I was also shown the valuables; I can say that I have never seen so much gold, especially foreign gold. I saw all kinds of money from all over the world collected together, as well as melted-down gold, whole ingots of gold.

I also saw the headquarters from where Wirth directed his operations; it was very small and inconspicuous. He actually had only three or four people with him. I also talked to them."

“These couriers actually came from Berlin, Tiergartenstrasse 4, the Fuhrer’s Chancellery, and returned there.  I examined Wirth’s correspondence and confirmed a great deal.”

Morgen also carried out investigations of corruption at Majdanek where commandant Florstedt was found guilty of corruption and he was executed by the SS on the 15 April 1945 at Buchenwald concentration camp. Hermann Hackmann was also found guilty, and sentenced to serve in an SS penal unit.

“What triggered my investigation was an Army postal packet sent back home from Auschwitz and the customs had opened this packet and found there were one or two kilos of gold in it.

And it was dental gold and then nobody could work out how this dentist had got hold of so much gold and I was supposed to go down there and find out what was behind it.

One morning very early I arrived by train and was very curious to see what sort of place it was and somehow or other you had the feeling that a place where such incredible ghastly things were happening on such a huge scale that it would somehow exude a frightful aura, that there would be something peculiar about it.

But no, there it was, a perfectly ordinary, grey, miserable, dirty industrial town. It was all perfectly normal, you didn’t see anything of the concentration camp either.

I was picked up in the commandant’s car, and a few minutes later found myself face to face with Commandant Hoss…. I explained my business to him and asked him to show me, the whole concentration camp including the extermination machinery. Then he gave me a chap to guide me round and we made a very thorough tour.”

“The crematoriums weren’t really noticeable. The ground was hollowed on an incline, and an outsider would only see that the wagons disappeared into a depression in the ground.

A big door led to the so-called undressing room, where there were numbered places and cloakroom tickets. Arrows on the wall pointed to the showers. The signs were in six or seven languages. In the enormous crematorium everything was spick and span. Nothing suggested that thousands of people had been gassed and burned the previous night. Nothing was left of them, not even a speck of dust on the oven fittings.

I wanted to meet the SS people and went to the SS guardroom in Birkenau. There I got my first real shock. While guardrooms were generally of Spartan simplicity, here SS men lay on couches and dozed, staring ahead glassy-eyed.

Instead of a desk there was a hotel kitchen stove in the room and four or five young Jewesses of Oriental beauty were making potato pancakes and feeding the SS men, who had themselves waited on like pashas. The SS men and the female prisoners used the familiar form, “Du” with one another.

At my horrified questioning look, my escort simply shrugged his shoulders and said that the men had a hard night behind them, they had to process several transports.

At a final locker check, it turned out in a few lockers, a wealth of gold, pearls rings, and currency of all countries was piled up. In one or two lockers there were genitals of freshly slaughtered bulls, which were supposed to enhance potency. I had never seen anything like it.” Evidence of theft by SS men were deposited in a barracks which burnt down on the 7 December 1943, so all the evidence was destroyed.

Maximillian Grabner director of the Political Department in Auschwitz was arrested by Dr Morgen accused of killing 2,000 prisoners “beyond the general guidelines.” Grabner’s was tried by an SS court in Weimar but was never concluded but he was tried and sentenced to death by the Supreme War Tribunal in Krakow in 1947.

Morgen carried out investigations into corruption at other camps such as Sachsenhausen, Flossenberg, Vught, Dachau and Plaszow, and the list of major SS men investigated is as follows:

After the war he appeared as a witness at the trial of major war criminals in front of the International Military Tribunal in Nuremberg, at the trial of the SS WVHA functionaries, and at the Auschwitz trial in Frankfurt –am – Main in 1965.