Smriti Zubin Irani (née Malhotra, born 23 March 1976) is an Indian politician and former model, television actress and producer. She represents the Bharatiya Janata Party and is the incumbent Minister of Human Resource Development in the Government of India following the election of the sixteenth Lok Sabha. 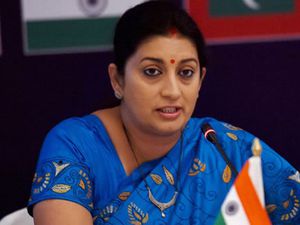 Smriti was born in Delhi. She is of Punjabi, Maharastrian, Bengali and Assamese origin and the eldest of three sisters. She has been a "part of the Rashtriya Swayamsevak Sangh (RSS) from childhood" as her grandfather was an RSS swayamsevak and her mother a member of Jana Sangh. She studied up to class 12 at Holy Child Auxilium School and discontinued further education. Irani has herself provided conflicting affidavits of her educational qualifications. In 2004, she submitted that she had obtained a graduate degree in Arts (B.A, 1996) from Delhi University (School of Correspondence); and in 2014, she submitted that she had completed a part of a graduate degree in Commerce (Part I B.Com, 1994) from Delhi University. Furthermore, a leak from the School of Correspondence, as reported by a newspaper, claims that Irani had enrolled in 2013, but had not written her examination. Before finding modelling stardom, she worked as a waitress at McDonald's.

Irani was one of the finalists of the beauty pageant Miss India 1998, along with Gauri Pradhan Tejwani. In 1998, Irani appeared in a song "Boliyan" of the album "Saawan Mein Lag Gayi Aag" with Mika Singh. In 2000, she made her debut with TV series Aatish and Hum Hain Kal Aaj Aur Kal, both aired on Star Plus. In mid-2000, Irani won the lead role of Tulsi Virani in Ekta Kapoor's production Kyunki Saas Bhi Kabhi Bahu Thi on Star Plus. She holds the record of winning five consecutive Indian Television Academy Awards for Best Actress (Popular), four Indian Telly Awards, eight Star Parivaar Awards. Irani had fallout with the producer Ekta Kapoor and she left the show in June 2007 and was replaced by Gautami Kapoor. She made her comeback in May 2008 in a special episode. At 6th Star Parivaar Awards, 2008, she was given the Base of Star Parivaar award. In 2001, she also played the mythological character Sita in Zee TV's Ramayan. In 2006, Irani co-produced the show Thodi Si Zameen Thoda Sa Aasmaan under her banner Ugraya Entertainment and Balaji Telefilms. She also played the lead role of Uma in it. In 2007, she produced the TV serial Virrudh for Sony TV and also portrayed the lead character of Vasudha in it. She also produced Mere Apne for 9X and portrayed the protagonist alongside Vinod Khanna. She also acted in a supporting role in Zee TV's Teen Bahuraaniyaan.

In 2008, Irani along with Sakshi Tanwar hosted the show Yeh Hai Jalwa, a dance based reality show featuring celebrities along with their troops on 9X. In the same year she also produced another show on Zee TV, Waaris which ended in 2009. In 2009, she came in a comedy show Maniben.com, aired on SAB TV. She also co-produced the show in collaboration with Contiloe Entertainment. In 2012, she also worked in Bengali movie Amrita. Irani joined the Bharatiya Janata Party in 2003. She became vice-president of the Maharashtra Youth Wing in 2004. In the 2004 general elections for the 14th Lok Sabha, she contested unsuccessfully against Kapil Sibal from the Chandni Chowk constituency in Delhi. She was nominated as executive member of the central committee of the BJP. In December 2004, Irani threatened to "fast unto death" until then Gujarat Chief Minister, Narendra Modi resigned, blaming him for BJP's electoral losses. However she later retracted this demand after BJP's central leadership threatened to take action against her. In May 2009, Irani while campaigning for Vijay Goel's candidature in New Delhi, voiced her concerns about the safety of women in the capital. She advocated capital punishment for rapists as a deterrent.

In early 2010, Irani was appointed National Secretary of BJP and on 24 June, she was appointed All India President of the BJP's women's wing, BJP Mahila Morcha. In August 2011, she was sworn in as a member of parliament from Gujarat to the Rajya Sabha. Irani contested the 2014 general elections against Rahul Gandhi in Amethi constituency of Uttar Pradesh. Irani lost to Gandhi by 107,923 votes, a 12.32% margin. On 26 May 2014, Prime Minister Narendra Modi appointed her as the Minister of Human Resource Development in his cabinet. At 38, she is the youngest member of the cabinet. In May 2014, Smriti Irani was at the centre of a raging controversy over her educational qualification after it emerged that she had made contradictory declarations when she contested Lok Sabha elections in 2004 and 2014. As a candidate in 2004 elections from Chandni Chowk in Delhi, Irani had declared that she had a Bachelor of Arts degree. "B.A. 1996 Delhi University (School of Correspondence)", she had written in the column which seeks details of University education and the year in which the course was completed. In the same column of the affidavit filed in the 2014 elections from Amethi, Irani responded "Bachelor of Commerce Part-1, School of Open Learning (Correspondence), University of Delhi-1994".

The appointment of Smriti Irani was criticised by many people owing to her low educational qualifications. Apart from opposition leaders, the feminist scholar and Modi supporter Madhu Kishwar remains critical of her appointment. The controversy over Irani’s educational qualifications took a new turn with her assertion that she also has a degree from Yale University in the United States. “In that kitty of mine where people call me ‘anpad'(illiterate) I do have a degree from Yale University as well which I can bring out and show how Yale celebrated my leadership capacities. Eleven MPs from India, including Irani, underwent a six-day crash course in leadership at Yale. Irani asked people to file a PIL about her educational qualification to know about the truth behind the affidavit controversy. As HRD Minister, Smriti Irani was accused of favouritism towards Vishram Jamdar, a self-proclaimed `RSS person' and a regional Sangh Parivar leader, for appointment as the Chairman of Visvesvaraya National Institute of Technology, Nagpur. In 2001, Smriti married Zubin Irani, a Parsi businessman. In October of the same year, the couple had their first child, a son named Zohr. In September 2003, the couple had their second child, a daughter named Zoish. Smriti is also a stepmother to Shanelle who is Zubin Irani's daughter from his previous marriage with coordinator and former beauty contestant Mona Irani.