Flora MacNeil (6 October 1928 – 15 May 2015) was a Scottish Gaelic singer. Originally discovered by Alan Lomax and Hamish Henderson during the early 1950s, she continued to perform into her later years. 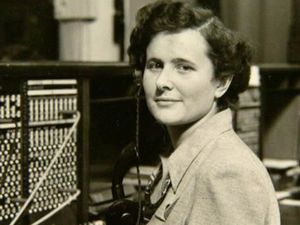 MacNeil was born in 1928 on the island of Barra, one of Gaelic song’s most important strongholds. There were singers on either side of her family, but this was a time when the menfolk were often away at sea for long periods, leaving the women to raise the children and tend the croft – singing all the while, to assuage their labours – and most of MacNeil’s repertoire was passed on from her mother, Ann Gillies. In these pre-television days (Flora’s family did not even have a radio until the 1950s), ceilidhs with the neighbours were a regular occurrence in the MacNeil household, and from earliest childhood she remembers “soaking up” literally hundreds of songs, as if by osmosis. Clearly, the music was in her blood: by age four, famously, she was already tackling the sophisticated poetry of Mo Run Geal Og (“My Fair Young Love”), one of the greatest of the Orain Mor, or “Big Songs”.

Like many others before her, MacNeil left Barra in 1947 to find work in Edinburgh. She found a public platform in the burgeoning round of ceilidhs and concerts that marked the first stirrings of the British folk revival. These brought her to the attention of Hamish Henderson, who recorded her singing as part of his 1950s collaboration with American musicologist Alan Lomax. Henderson also invited MacNeil to perform at the 1951 Edinburgh People’s Festival Ceilidh. The ceilidh, which brought Scottish traditional folk music to the public stage for the first time, took place in Edinburgh's Oddfellows Hall in August 1951. The Scottish Gàidhealtachd was represented at the Celidh by Flora MacNeil, Calum Johnston, and John Burgess.

The music was recorded live at the scene by Alan Lomax. In 2005, Lomax's recording was released on compact disc by Rounder Records. Until 1954, the Edinburgh Festival Ceilidhs were an annual event. Eventually, however, the affiliation of some board members with the Communist Party of Great Britain caused the events to lose the backing of the city's trade unions. MacNeil also recorded two albums, Craobh nan Ubhal in 1976 (reissued in 1993) and Orain Floraidh in 2000. She died after a short illness on 16 May 2015, aged 86. Flora's daughter, Maggie MacInnes, is a Gaelic singer and harpist.