Vice Marshal Choe Ryong-hae (born 15 January 1950) is a North Korean politician and military official, serving as a member of the Politburo Presidium and Secretariat of Workers' Party of Korea. He also served as Kim Jong-un's military second-in-command. 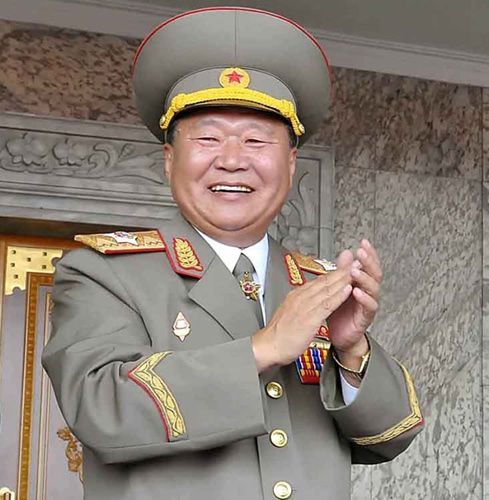 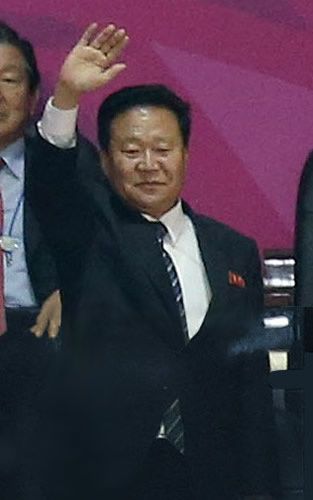 Choe Ryong-hae was born in Sinchon County, South Hwanghae Province, on 15 January 1950 as the son of Choe Hyon, who served as defence minister of North Korea from 1968 to 1976. He joined the Korean People's Army in 1967 and graduated from the Kim Il-sung University as a political and economic expert. In the 1980s, he was a leading member of the Socialist Working Youth League, being its vice-chairman from 1981 and chairman from 1986; when it was reformed into the Kim Il-sung Socialist Youth League in 1996, he was appointed its first secretary. In 1986, he was also elected deputy to the Supreme People's Assembly, member of the SPA Presidium and full member of the Central Committee of the Workers' Party of Korea. In the 1990s, he also led the DPRK Soccer Association and the Taekwando Association of Korean Youth. He was awarded the title Hero of the DPRK in 1993. He was replaced as first secretary of the Youth League by Ri Il-hwan at the 14th plenary meeting of the league's Central Committee (January 1998), officially "for his illness".

After leading the youth league, Choe was deputy director of the General Affairs Department of the WPK Central Committee, then chief secretary of the Hwanghae Province Party Committee from 2006 to 2010. In September 2010, during the 3rd Conference of the Workers' Party of Korea, he was promoted to KPA General as well as member of the WPK Secretariat and Central Military Commission, and Politburo alternate member. He was also appointed secretary for military affairs. Choe didn't receive particular public attention until Kim Jong-il's death in December 2011. Choe was then seen as a key asset in securing Kim Jong-un's leadership. In April 2012, he received important promotions to Vice Marshal, member of the Politburo Presidium of the WPK Central Committee, vice-chairman of the Central Military Commission, director of the KPA General Political Bureau and member of the National Defence Commission, largely filling the post left unoccupied by Jo Myong-rok's death and working as power broker for Kim Jong-un.

Choe Ryong-hae, considered a protégé of Jang Song-taek, is seen part of a plan by Kim Jong-un to restore Party control over the military after it was overturned by Kim Jong-il, particularly after Vice Marshal Ri Yong-ho's dismissal. In fact, Choe does not have a strong military background and seems to support the employment of soldiers to build civilian facilities. Chosun Ilbo reports that a diplomatic source said Choe is appointing Socialist Youth League members to key military posts and "has assumed control of various businesses run by the military, losing trust and loyalty among the troops." Choe's inspections are the only ones, besides Kim Jong-un's and the Premier's, to be reported nationwide by state media.

By December 2012, Choe was demoted from Vice Marshal to General, as he was listed KPA General at a national meeting marking the first death anniversary of Kim Jong-il on 16 December and at the inaugural ceremony of the Kumsusan Palace of the Sun, though he wore KPA Vice Marshal insignia at the rally celebrating the successful Kwangmyŏngsŏng-3 Unit 2 launch on 14 December. This would be concurrent with Hyon Yong-chol's demotion to the same rank and Kim Jong-gak's removal as defence minister, and may be a consequence of the powerful army's growing dissatisfaction over Choe's tenure. Choe was seen unexplainably wearing the Vice Marshal insignia again at a meeting in February 2013 and became Kim Jong-un's special envoy for strategic partner China. In early 2014, Choe was noticeably absent from several public events that he normally would attend with the top leader. In March 2014, it was reported that Choe Ryong-hae had been jailed and was being interrogated. Choe was later seen in public walking with a limp.

He was appointed the first-ranking vice-chairman of the National Defence Commission in April 2014, apparently reinforcing his No. 2 position, but he was replaced by newly appointed Vice Marshal Hwang Pyong-so as chief of the KPA politburo, and was officially demoted from the NDC after only five months, thus ending his involvement in military affairs. North Korea's news agency reported later on that he was party secretary in charge of labor organizations and chairman of the State Physical Culture and Sports Guidance Commission, a post previously held by Jang Song-thaek, and then part of a delegation to South Korea to attend the closing ceremony of the Asian Games. He was also restored to his Politburo Presidium position in late October, and finally demoted from it next February, although he remained a high-ranking member of the Politburo. Reports suggested arrogance and bad reputation among the elites as reasons leading to his downgrading. He was however reelected Presidium member at the 7th Party Congress in May 2016. In November 2014 Choe brought a letter from Kim Jong-un to Vladimir Putin. Choe's second son, Choe Song, was reported in January 2015 to have married Kim Jong-un's younger sister Kim Yo-jong.