Joan Lee (née Boocock; 5 February 1922 – 6 July 2017) was a British-American hat model and voice actress. She was also notable for her nearly 70-year marriage to comic book writer Stan Lee. She met him in New York City in the 1940s, while working as a hat model. In her later years, she became a voice actress and provided her voice in Spider-Man and Fantastic Four both in the 1990s. 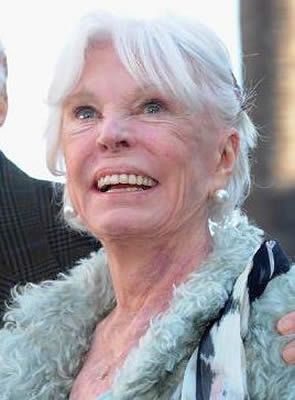 Joan Boocock's birth was registered in the first quarter of 1922 in Castle Ward Rural District (now part of Newcastle's Metropolitan Borough) according to her birth register records. Her mother's maiden name was Clayton. In one interview, she said she was born in Gosforth, Newcastle, and grew up both there and in Fawdon. After World War II, she left for the United States after marrying an American serviceman, New Yorker Sanford Dorf Weiss. She had only known him for 24 hours before getting married in 1943. In her early years, Joan Boocock was a well-known hat model in the New York City-area until she met Stan Lee in New York. She was bored in her marriage to Weiss when she met Lee, who had been set up on a blind date with another model. When Lee went to the modeling agency to meet his intended date, Boocock answered the door, he immediately professed his love for her and told her he had been drawing her face since childhood.

Stan proposed after two weeks of dating, and she went to Reno, Nevada to get a quick divorce. On December 5, 1947, she divorced her first husband and promptly married Lee in the room next door. The judge who had granted her divorce just an hour before performed the ceremony. Together, they had two daughters, Joan Celia "J. C." Lee (b. 1950), and Jan Lee, who died three days after delivery in 1953. In 1949, the couple bought a two-story, three-bedroom home in Woodmere, Long Island, New York, living there through 1952. In some versions of the origin of the Fantastic Four, Lee credits Joan with inspiring him. He was depressed about his career and contemplated leaving the business. Lee told her husband: "why don’t you write one comic you'd be proud of?" Afterward, Stan Lee created the Fantastic Four.

In 1981, Stan and Joan Lee moved from New York City to Los Angeles, California. She did voice work on two 1990s animated Marvel shows, Fantastic Four as Miss Forbes in four episodes in 1994. She provided her voice as a computer voice in the Iron Man television series for three episodes in 1994. She appeared in Spider-Man as Madame Web. She appeared as Madame Web in eight episodes spanning from 1996 through 1998. In 2002, she appeared as herself alongside Stan Lee and Kevin Smith in Stan Lee's Mutants, Monsters & Marvels. In 2003, she appeared as herself in the documentary Comic Book Superheroes Unmasked. In 2010, she appeared in a documentary about her husband in With Great Power: The Stan Lee Story. Lee made her last appearance in a cameo in the 2016 film X-Men: Apocalypse alongside her husband.

Joan Lee wrote a 1987 novel, The Pleasure Palace. It was about a man striving to build the most luxurious ocean liner ever while romancing several women at once. According to her daughter Joan, she had three more unpublished but finished novels at home. Lee died on 6 July 2017, in Los Angeles from stroke-related complications after being hospitalized for a week. She was survived by her husband of almost 70 years, and their daughter, Joan. Although multiple sources cited her age as 93 at the time of her death, British birth records show she was, in fact, 95 years old.