Wendy Ruth Sherman (born 1949) is Senior Counselor at Albright Stonebridge Group and also Senior Fellow at Harvard Kennedy School's Belfer Center for Science and International Affairs. She served as Under Secretary of State for Political Affairs, the fourth-ranking official in the U.S. Department of State, from September 2011 to October 2015. She has formerly worked as a social worker, the director of EMILY's list, the director of Maryland's office of child welfare, and the founding president of the Fannie Mae Foundation. During the Clinton Administration, she served as Counselor of the United States Department of State and Special Advisor to the President and Secretary of State and North Korea Policy Coordinator. In the latter role, she was instrumental in negotiations related to North Korea's nuclear weapon and ballistic missile programs. She was also the lead negotiator for the Iran nuclear deal. 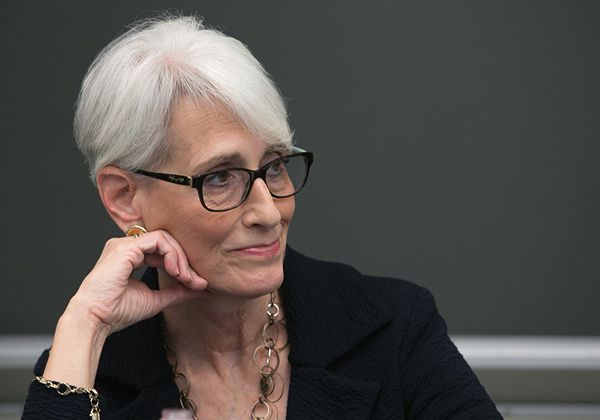 Sherman was born in Baltimore, Maryland, to a Jewish family. Her father, Malcolm Sherman, was a Marine originally from Philadelphia. While she was in elementary school, her family moved to Pikesville, Maryland, and Sherman attended Pikesville High School. Sherman attended Smith College from 1967 to 1969, and graduated from Boston University in 1971 in the field of sociology and urban studies. In 1976, she earned a master's degree in social work from the University of Maryland. She subsequently began her career as a social worker, before going into politics. Originally a social worker, Sherman began her career working to help battered women and the urban poor. As part of the neighborhood movement, she worked as a social activist, alongside activists like Geno Baroni and Arthur Naparstek on problems related to low-income housing. Sherman's early jobs were in partisan politics and social work. These included working as the director of EMILY's List, which provides money to pro-choice, female, Democratic political candidates. She also worked as director of Maryland's office of child welfare and as the president and CEO of the Fannie Mae Foundation, an arm of Fannie Mae.

Sherman has worked in a variety of positions in both government and non-profit organizations: chief of staff for three years for then Congresswoman Barbara Mikulski, campaign manager for Mikulski's first successful Senate campaign, Special Secretary for Children and Youth in Maryland (a cabinet-level position), Director of Maryland's Office of Child Welfare, supervising protective services, foster care, adoptions, and group homes. Sherman directed Campaign '88 for the Democratic National Committee, where she oversaw field and political operations, communications, Congressional relations, constituency operations, issue development and coordination with all federal, state and local campaigns during the 1988 general election. From 1991 to 1993, Sherman specialized in strategic communications as a partner in the political and media consulting firm of Doak, Shrum, Harris and Sherman. Prior to that, she directed EMILY's List, the largest financial and political resource for pro-choice Democratic women candidates. From 1993 to 1996, Sherman served under United States Secretary of State Warren Christopher as Assistant Secretary of State for Legislative Affairs, where she directed the legislative efforts of the State Department with the U.S. Congress. Among other issues, she led the efforts to obtain the funding for Russia and the newly independent states after the break-up of the Soviet Union and support for the Dayton accords.

After working as CEO and President of the Fannie Mae Foundation, she then returned to the State Department as Madeleine Albright's counselor, with the rank of Ambassador, appointed by President Bill Clinton and confirmed by the U.S. Senate. She advised Secretary Albright on issues of foreign policy, provided guidance to the Department and undertook special assignments. She has been a Vice Chair of Albright Stonebridge Group, Albright's international strategic consulting firm, since the group's formation in 2009. She advised Hillary Clinton during the 2008 presidential campaign, and she has served with Thomas Donilon as an agency review lead for the State Department in the Obama presidential transition. In 2015 she was named as one of The Forward 50. On September 21, 2011, she was appointed to the position of Under Secretary of State for Political Affairs by Secretary Hillary Clinton. In this capacity, Sherman has led the US team during six negotiating rounds between Iran and six world powers about Tehran's nuclear program. In October 2013, before negotiations began in Geneva between Iran and the so-called "P5+1," she made a comment about the Iranian negotiating strategy in a Senate committee hearing. She said, "We know that deception is part of the DNA." This caused her some trouble when a number of Iranian officials, including some members of the country's parliament, asked her to apologize. She served as the lead negotiator for the United States in the agreement reached with Iran on July 14, 2015 in Vienna.

Wendy Sherman was the Clinton administration's policy coordinator for North Korea. The Clinton Administration had first arrived at the 1994 Agreed Framework under which, North Korea agreed to freeze and dismantle its nuclear weapons program, including its main reactor at Yongbyon (Sherman continues to defend the 1994 deal and her involvement in it, stating that "during the Clinton administration not one ounce of plutonium was added to the North Korean stockpile"). Sherman later headed North Korean negotiation policy until 2001. In 2001, following years of secret negotiations with Kim Jong Il, North Korea had promised not to produce, test or deploy missiles with a range of more than 300 miles. That offer would prevent North Korea from fielding missiles that could strike the United States. North Korea also offered to halt the sale of missiles, missile components, technology and training. In 2001, in a New York Times op-ed, Sherman recommended that the only way the US deal could deal with North Korea's disputed programs and prevent them achieving a nuclear capability was through diplomacy, writing that Kim Jong Il now "appears ready to make landmark commitments". In 1999, James Baker criticized her team's negotiating strategy with North Korea as "appeasement" – that was rewarding the North Korean regime for minimal concessions, and he said that as a result they would fail to prevent their nuclear program. In 2011, John Bolton said that Wendy Sherman had been central in forming a policy on North Korea that was "nothing less than appeasement."

From April 1996, Sherman became founding President and CEO of the newly created Fannie Mae Foundation, which was developed by Fannie Mae and endowed with $350 million in Fannie stock, with the goal of promoting home ownership and mortgages across wider sectors of American society. She has also been a member of the operating committee of Fannie Mae. At Fannie Mae, she set in place the groundwork for the newly recreated foundation. In 1996, she described her mission as the first president of the Fannie Mae Foundation: In other words, it is broadly reaching out to American citizens and saying to them: "You can have access to affordable housing. You might be able to get started on the path to homeownership, and we can at least give you some information that might help you get on your way." In addition, two other programs came over. One is the New Americans Program, which is an effort to reach out to new citizens and immigrants to this country, because it was found in some research done in 1995 by Fannie Mae that immigrants who are renters are three times more likely to become homeowners than are other renters – because part of the American dream is to become a citizen and own your home. The last piece is an initiative trying to end some of the discriminatory practices in the mortgage lending business. We have a beginning of a program, where we are going to work with community colleges and other partnerships to help folks take courses and get into the mortgage lending business, so that the people who sit across the table – they become loan officers – may look a little bit more like you, might understand your culture and your values.

On February 27, 2015, Sherman told a conference at Carnegie Endowment for International Peace "The Koreans and Chinese have quarreled with Tokyo over so-called comfort women from World War II. There are disagreements about the content of history books and even the names given to various bodies of water. All this is understandable, but it can also be frustrating." She continued "Of course, nationalist feelings can still be exploited, and it’s not hard for a political leader anywhere to earn cheap applause by vilifying a former enemy. But such provocations produce paralysis, not progress." Her comments were condemned by South Korea, but an analyst at the Asan Institute for Policy Studies said the reaction to Ms Sherman’s remarks seemed excessive, and that her comments were in line with US policy. Sherman is married to Bruce Stokes, a former journalist and Director, Global Economic Attitudes at the Pew Research Center. They first met in 1978 for a discussion about low-income housing.