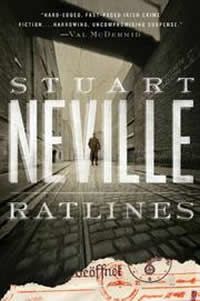 In a divided country on the brink of the Cold War, the hunt for a Nazi killer is more complicated—and more dangerous—than it seems. It's 1963, and the world is heating up. President John F. Kennedy, already wary of Castro, is coming to Ireland for a state visit. The entire country is excited, not only because of Kennedy's heritage, but because of the implied endorsement of the American leader in the country's continuing conflicts with the British. Therefore, when an Austrian refugee is shot point-blank in a small, rural Irish guesthouse, Dublin wants it handled quickly and quietly.

The fact that the murderer left a threat for another former SS officer, one who has moved into Irish politics, cannot get out at all, and when intelligence officer Albert Ryan is brought in, he is warned that discretion may be more important than the law. Lt. Ryan is a good choice for the assignment since he's an outsider, his own loyalties both convoluted and conflicted. The son of a small-town shopkeeper, Ryan had enlisted in the British army as a teen, an act that continues to cause his family trouble. But even though his homeland remains at least partially ambivalent toward the Germans—as well as the victorious British—he knows how to put his head down and solve a murder.

As his dogged, thorough police work brings him into an underworld where war criminals and politicians mingle, however, he will find that nothing is that simple. As he did in Ghosts of Belfast (2009) and its sequel, Collusion (2010), Neville shows how the past is linked to the present, particularly in the brooding Ireland of his noir thrillers. In a setting of dampness and poverty, he creates a world where grudges may last for generations and blood feuds full of the kind of pervasive detail that makes this grim world real persist.  Another moody winner mixes Nazis into Neville's usual Irish noir.