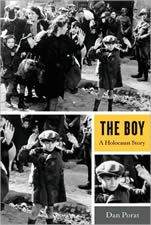 A cobblestone road. A sunny day. A soldier. A gun. A child, arms high in the air. A moment captured on film. But what is the history behind arguably the most recognizable photograph of the Holocaust? In The Boy : A Holocaust Story, the historian Dan Porat unpacks this split second that was immortalized on film and unravels the stories of the individuals—both Jews and Nazis—associated with it.

The Boy presents the stories of three Nazi criminals, ranging in status from SS sergeant to low-ranking SS officer to SS general. It is also the story of two Jewish victims, a teenage girl and a young boy, who encounter these Nazis in Warsaw in the spring of 1943. The book is remarkable in its scope, picking up the lives of these participants in the years preceding World War I and following them to their deaths.

One of the Nazis managed to stay at large for twenty-two years. One of the survivors lived long enough to lose a son in the Yom Kippur War. Nearly sixty photographs dispersed throughout help narrate these five lives. And, in keeping with the emotional immediacy of those photographs, Porat has deliberately used a narrative style that, drawing upon extensive research, experience, and oral interviews, places the reader in the middle of unfolding events.

The photograph is iconic: A little boy in short pants and a hat; his face crumpling with fear; his hands in the air. Standing behind him to the right is a Nazi soldier, submachine gun in hand. This single picture returns an entire horrific era of the Holocaust to its human level. In the same way, Daniel Porat's debut book presents the story of Nazism through the lives of five people; three SS officers of different ranks and two Jewish victims; one a teenage girl; the other, a young boy. In words and sixty-two pictures, he traces these five disparate lives from their formative years to the end of World War II and beyond. Based on extensive research and oral interviews, The Boy throws a bright floodlight on this almost unimaginable epoch. Now in paperback and NOOK Book.

In his first book, Porat, a Hebrew University Associate Professor, shares a remarkable true story wherein multiple Nazi war criminals and Jewish victims intertwine. Using court documentation, recorded accounts, and scrapbooks and journals, Porat pieces together life inside the infamous Warsaw ghetto. After the Jews of Warsaw were forced inside, SS Brigadeführer Jürgen Stroop was ordered to oversee their liquidation. Stroop was flanked by two lower ranking officers, Blösche, an SS member involved with roundups, interrogations, and executions, and Konradm, an SS member and photographer who documented the the Nazi mission.


These men's lives intersect with Rivkah, an ally to the Jewish Fighting Organization, and the eponymous boy photographed with his hands in the air and a Nazi machine gun pointed at his head. The little boy is thought to be Tsvi, and Porat reveals through court documents that Blösche was the Nazi threatening him. Tsvi is shortly discussed, losing most of his family to concentration camps and Nazi murderers. Through extensive research and well-written documentation, Porat delivers a spellbinding account of Warsaw and its inhabitants. Photos. (Nov.)

Dan Porat is on the faculty of the Hebrew University of Jerusalem and teaches courses on the representation of the Holocaust. He is the author of numerous academic publications.