Bruno Bräuer (4 February 1893 – 20 May 1947) was a German paratrooper from Willmannsdorf, Prussian Silesia. In 1905 he joined the army cadets and started his military career. 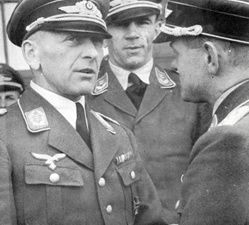 In World War I he received the Iron Cross first and second class whilst serving in the 7th West Prussian Infantry regiment. After joining the Reichswehr, he took command of the first Battalion, General Göring regiment. As a major commanding this battalion (the first German unit to become airborne operational), Bräuer became the first German paratrooper to jump from a plane on 11 May 1936. By 1938 he was in command of the first Fallschirmjäger regiment; Major Von Grazy succeeded him as commander of the 1st Battalion. He commanded this unit through Poland, France, the Netherlands and the Balkans. Later he became commander on Crete and then commanded the 9th Paratroopers division as a Major General. After the war, he was executed for war crimes.

Bräuer was quite short and had a slight stutter. He was also renowned for his gold cigarette case, which he can be seen holding in one of the few pictures taken of him on Crete in 1941. He was said to have been the most humane commander of fortress Crete. Bräuer led the regiment in Poland, France and the Low Countries. In the Netherlands, he earned a reputation for outstanding bravery. His objective was to take two bridges: Moerdijk and Dordrecht. At Moerdijk his second battalion under Captain Prager captured the bridge by dropping two of his companies at each end and storming the bridge, taking it before it could be blown. At Dordrecht the first Battalion, first Fallschirmjäger regiment could only drop one company-the 3rd company under Lieutenant von Brandis. Fierce fighting took place, but the bridge remained in Dutch hands and Brandis was killed.

A nearby airfield, Waalhaven, was taken by the third Battalion, first Fallschirmjäger regiment by luring the defenders away from the airfield and then landing in it. As Dutch resistance increased and Dordrecht Bridge still had not been taken, Bräuer commandeered Dutch vehicles. After terrible fighting and bravery from Bräuer, the bridge was taken intact. He received the Knight's Cross of the Iron Cross for this feat. Bräuer would also have been involved with the spearhead for Operation Sea Lion, the planned German invasion of Great Britain. While Major Meindl's battalion would be dropped at Hythe, it was planned that Bräuer's regiment would be dropped over Paddlesworth and Etchinghill. Both these units' objectives would be Sandgate. While they were moving to their targets, the Luftwaffe would be flying back to France to transport the second wave of paratroopers-Major Stenzler's battalion-who would support the first wave.

In November 1942 Bräuer replaced General Alexander Andrae as commander on Crete. He tried to make his officers treat the Cretans with more respect. On 25 March, Greek National Day, he released 100 Cretan prisoners from jail. One prisoner, Constantinos Mitsotakis, would later become Prime Minister of Greece. Brauer acquired the reputation as hard but fair and the most humane commander of Crete. After German failures at Stalingrad and El Alamein, it was Bräuer who ordered the construction of underground command bunkers, more defenses around Suda Bay and increased ammunition stocks. In 1944 General Friedrich-Wilhelm Müller, renowned for his brutality when commander of the 22nd Infantry Division, replaced Bräuer as Commander of Fortress Crete.

In January 1945 the German 9th Parachute Division was formed under Bräuer. It had only five battalions. It was mainly made up of Luftwaffe ground forces and not the battle-hardened Fallschirmjäger. In January 1945 two of his battalions were encircled by the first Ukrainian front in Breslau, where they were destroyed. The rest of the division retreated back to the Seelow Heights, where it dug in and prepared to defend against an imminent Russian offensive. With little experience, many of the troops fled when the Russian barrage began. Before long, the line had nearly completely collapsed and many of Bräuer’s men began to desert. Bräuer suffered a nervous collapse and was relieved of his command.

Along with General Friedrich-Wilhelm Müller, Brauer was charged with war crimes by a Greek military court. He stood trial in Athens for alleged atrocities on Crete. He was accused of the deaths of 3,000 Cretans, massacres, systematic terrorism, deportation, pillage, wanton destruction, torture and ill treatment. Brauer was convicted and sentenced to death on 9 December 1946. He was executed by firing squad at 5 o'clock on 20 May 1947, the anniversary of the German invasion of Crete. Historian Antony Beevor describes him as 'a truly unfortunate man' having been executed for crimes 'committed under another general'. Three years later, the Association of German Airborne troops requested that Brauer's remains be moved to Crete and reinterred on hill 107, with German troops killed on the island during the invasion and the occupation. His remains were buried by George Psychoundakis, resistance fighter and author of The Cretan Runner. Brauer's grave can be found in the far left corner of the cemetery next to an unknown soldier.

The parachute units under the leadership of Major General Meindl, Colonel Heidrich, Colonel Bräuer, Colonel Ramke and Colonel Sturm, created in hard fighting, the crucial conditions for the conquest of Crete.