Viktor Bauer was born on 19 September 1915 at Löcknitz in the Randow region of Vorpommern. 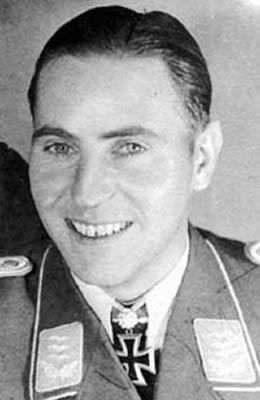 He joined the Luftwaffe in 1936 with the rank of Fahnenjunker. Following the completion of his fighter pilot training, he was posted to I./JG 2. On 1 March 1940, Leutnant Bauer was serving with 2./JG 77. Bauer participated in the French campaign with the unit and was to gain his first aerial victory over Belgium on 15 May, when he shot down a RAF Hurricane fighter near Brügge. He gained one further victory during the French campaign serving with 1./JG 77, when he shot down another Hurricane near Cambrai on 18 May. Bauer served in the Battle of Britain. By November 1940, he was serving with 9./JG 3. He gained one victory during the aerial battles over England to raise his victory total to three. On 5 February 1941, he claimed his 4th victory, a RAF Hurricane, over the Channel.

This would prove to be last victory gained over the Western front. Shortly before the invasion of Russia began, Bauer was appointed Staffelkapitän of 9./JG 3. In June 1941, he claimed 15 Russian aircraft shot down, including five Russian SB-2 twin-engine bombers claimed on 26 June for his 7th through 11th victories. He claimed 17 victories in July, including five Russian DB-3 twin-engine bombers on 12 July (26-30). Oberleutnant Bauer was awarded the Ritterkreuz on 30 July for 36 victories. On 23 July, Bauer was badly wounded in aerial combat with Russian bombers but was able to make an emergency landing in his Bf 109 F-2 (W.Nr. 8987). He was to spend many months in hospital finally returning to combat duty in February 1942. Bauer recorded his 40th victory on 18 February followed by his 50th on 4 April. On 22 May, he claimed four Russian I-61 fighters shot down (57–60). He claimed a further four victories on 30 June (66-69). Bauer was spectacularly successful in July 1942 recording 33 victories during the month. Five times he shot down four enemy aircraft in a day and twice recorded five victories in a day.

On 25 July, he claimed four victories (99-102). He was awarded the Eichenlaub (Nr 107) the next day. On 9 August, he claimed his 106th victory but one day later his Bf 109 F-4 (W.Nr. 13 241) was damaged by enemy fire and Bauer wounded. He successfully carried out an emergency landing. Following his recovery, Bauer was transferred as a Staffelkapitän to Ergänzungs-Jagdgruppe Ost. On 1 July 1943, Major Bauer was appointed Gruppenkommandeur of Ergänzungs-Jagdgruppe Ost, a position he was to hold until 4 November 1944. On 1 December 1944, Oberst Bauer was appointed Kommodore of EJG 1. Bauer served in this role until the end of the war. Bauer died on 13 December 1969 at Bad Homburg. Viktor Bauer was credited with 106 victories in approximately 400 missions. He recorded 102 of his victories over the Eastern front, including 27 Il-2 Sturmoviks.