Ludwig Hermann Karl Hahn (23 January 1908 – 10 November 1986) was a Germany SS functionary during the Nazi era and a convicted criminal. 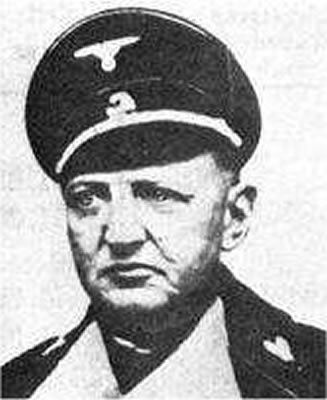 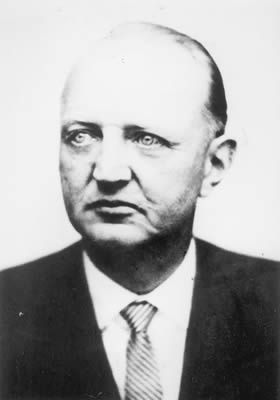 A Nazi political official, Hahn was trained as a lawyer and held multiple government and security positions during his career with the SS. Hahn directly participated in the Einsatzgruppen killings in German-occupied Poland and was chief of the Nazi-security services in Kraków. Hahn was later appointed chief of the Sicherheitsdienst (SD) and the Sicherheitspolizei (SiPo) for Warsaw. He was involved in the destruction and liquidation of the Warsaw Ghetto (1942) and the brutal suppression of both the Warsaw Ghetto Uprising (1943) and the Warsaw Uprising (1944). The son of a prosperous farmer of the same name, Hahn was born in the rural town of Eitzen, Uelzen district in the Province of Hanover. Hahn attended Volksschule as a youth and graduated from the Realgymnasium in Lüneburg in 1927. Hahn went on to study law at the University of Göttingen and the University of Jena, where became a member of the National Socialist German Students' League. He joined the Nazi Party in February, 1930 (NSDAP Nr. 194 463). Hahn also joined the Sturmabteilung (SA) where he held the title of Scharführer. Hahn obtained his doctorate of law (dr. jur.) in 1931.

Hahn left the SA in 1932 to further concentrate on his studies. After successfully defending his dissertation before the Faculty of Law at the University of Jena, Hahn joined the Schutzstaffel (SS) in April, 1933 (SS Nr. 65 823). He was assigned to the 17th SS-Standarte (regiment) in Lüneburg and was later transferred to the 26th SS-Standarte in Hamburg. Hahn was also attached to the SS-Oberabschnitt Mitte (district headquarters) in Weimar as a member of the Stabswache. After apprenticing as an assessor in Hanover, Hahn qualified as a lawyer in 1935 and joined the National Socialist Association of Legal Professionals (NS-Rechtswahrerbund). That same year he married Charlotte Steinhoff, sister of the Luftwaffe fighter pilot Johannes Steinhoff, who later served as a senior General with the postwar West German Air Force and was also Chairman of the NATO Military Committee from 1971-1974. The couple would have four children.

Hahn underwent Nazi political and ideological-training at the Nazi Party's State School for Leadership and Politics in Egendorf. He was recruited into the Sicherheitsdienst (SD) in May, 1934. Beginning in June, 1935 Hahn worked as a clerk at the SD-Hauptamt in Berlin. In January, 1936 he was appointed assistant director of the Gestapo office in Hanover. Hahn was reassigned to the Gestapo's Berlin headquarters as an administrative officer in September, 1936. From January-March, 1937 Hahn underwent military-training with the Wehrmacht in Brandenburg an der Havel. After his training was complete, Hahn was commissioned in the Wehrmacht as an officer candidate with the rank of Gefreiter (lance corporal) in the reserves. From April, 1937 to August, 1939 he served as chief officer of the Gestapo for the city of Weimar. In August, 1939 Hahn was transferred to Vienna in preparation for the looming invasion of Poland. He was assigned to Einsatzgruppe I under the command of Brigadeführer Bruno Streckenbach, and was given command of the sub-unit of Einsatzkommando 1/I. By this point in his career Hahn had risen to the rank of Sturmbannführer (major) in the SS. During the invasion of Poland in September, 1939 Hahn and his unit were attached to he German 14th Army. During this time Hahn and his Einsatzkommando also took part in the arrests and executions carried out in Silesia and Malopolska as part of Operation Tannenberg, the Nazi extermination campaign targeting the Polish intelligentsia.

Under Hahn's leadership Einsatzkommando 1/I seized control of Katowice and Sanok where they executed or imprisoned numerous Polish public officials, members of the upper class, activists, intellectuals, journalists, Jews and veterans of the Silesian Uprisings. They also played a leading role in the expulsion of the remaining Jews in the town of Dynow and their subsequent deportation into the Soviet-occupation zone. From November to December, 1939 Hahn held the position of Stadtkommissar (city commissioner) for the town of Przemyśl. Beginning in January 1940 Hahn took over as Chief of the Sicherheitspolizei (SiPo) and Sicherheitsdienst (SD) for the occupied city of Kraków. Hahn oversaw Sonderaktion Krakau an SS operation which involved the deportation of hundreds of professors and other academics from Jagiellonian University to various concentration camps in Germany. Hahn also served as chief of the "police emergency court" (Standgericht) at Montelupich Prison. In this capacity Hahn was instrumental in the implementation of the German AB-Aktion in Poland. Hahn was transferred to the German embassy in Bratislava in August 1940, where he served as a Sonderbeauftragter (special representative) of the Reichsführer-SS to the Nazi-allied government of the Slovak Republic, under the fascist regime of Jozef Tiso. From April-June, 1941 Hahn was stationed in Athens, Greece where he commanded Einsatzgruppe Griechenland during the Balkan Campaign. Following the German victory in the offensive, Hahn returned to his SS diplomatic post at the German embassy in Slovakia. In June, 1941 Hahn was promoted to SS-Obersturmbannfuhrer (lieutenant colonel).

Beginning in August, 1941 Hahn was appointed chief of the SD and the Security Police for the district of Warsaw. During his tenure, Hahn was heavily involved in the implementation of the Holocaust in Poland. In the summer of 1942 Hahn, working together with SS personnel associated with Operation Reinhard, planned and organized the destruction and liquidation of the Warsaw Ghetto. Nearly 265,000 Jews perished in the operation, either in mass-shootings conducted by the SS or after being deported to the extermination camp at Treblinka. As a deputy officer to SS and Police Leader Jurgen Stroop, Hahn also had a leading role in the bloody suppression of the Warsaw Ghetto Uprising in April-May, 1943. The brutal pacification of the Ghetto by the SS resulted in the deaths of 13,000 Jews either killed in the fighting or executed. Hahn later orchestrated the deportation of another 56,000 Jews from Warsaw to Treblinka in the aftermath of the rebellion. In April, 1944 Hahn was promoted to the rank of SS-Standartenfuhrer (colonel) and received the title of Oberst der Polizei. During the August-October, 1944 Warsaw Uprising by the Polish Home Army, Hahn fought with the Waffen-SS the southern districts of the city and later in the downtown area. He also personally commanded the defense Warsaw’s heavily fortified government district. Following the capitulation of the uprising, Hahn, acting on instructions from Himmler, ordered the mass-killing of Polish civilians in retaliation for the rebellion. Between August-September, 1944 and estimated 5 to 10 thousand men women and children were shot by the Gestapo, mainly in the ruins of the former General Inspectorate of the Armed Forces.

In November, 1944 Hahn was reassigned from Warsaw to the Western Front. He was stationed in the town of Cochem and was appointed commander of Einsatzgruppe L which was attached to the German Sixth Panzer Army during the Battle of the Bulge. After the failure of the Ardennes offensive in January, 1945 Hahn was transferred to the Eastern Front where he was assigned to Army Group Vistula as a commissioner for the Reich Main Security Office (RSHA). He also briefly served with the Waffen-SS as commander of an artillery battery during the Vistula-Oder offensive. From February-March, 1945 Hahn was posted to Dresden as Stabsführer (chief of staff) to SS-Gruppenführer Ludolf von Alvensleben, the Higher SS and Police Leader for the Elbe. Later he was once again placed under the command of SS-Gruppenführer Jürgen Stroop and was appointed chief of the SD and the Security Police for the city of Wiesbaden. However, Hahn was quickly displaced from his new position by the Allied advance into Germany. In March, 1945 Hahn was appointed commander of the SD and the Security Police for North-Westphalia and was transferred to Dusseldorf. After Dusseldorf was captured by the US 97th Infantry Division, Hahn and his staff fled east and reestablished their headquarters in the town of Hessisch-Oldendorf. Hahn was taken prisoner by the British Army on April 12, 1945. However, he successfully escaped from Allied custody shortly afterward.

Hahn remained in Germany after 1945 and went into hiding in Bad Eilsen in the British occupation zone, working for several years as a laborer and farmhand. He later moved to Wuppertal where took a job as a salesman working in the textile industry. He resumed using his real name in 1949. At a hearing in 1950, Hahn's wife Charlotte falsely claimed to British authorities that her husband had been taken prisoner by the Russians and deported, prompting the British Army to end their war crimes investigation of him. Afterward, Hahn went on to pursue a successful career as an insurance broker in West Germany for many years. In 1951 Hahn's father-in-law arranged for him to take a position as Deputy Director for Organizational Matters with the Hanover branch of Karlsruher Lebensversicherung A.G. Hahn later rose to the office of branch manager in 1955. In 1958 Hahn and his family relocated to Hamburg where he had been hired as head of the insurance department for Schmidt Assekuranz K.G. Following an investigation by the West German federal police, Hahn was arrested by the government of West Germany in July, 1960 on suspicion of his alleged involvement in the destruction of the Warsaw Ghetto. He was held by West German investigators for a year, however no charges were brought and he was released in 1961. Following his release Hahn took a position with the Hamburg branch of Investors Overseas Service. He retired in 1967.

He was again arrested by West German police in 1965 and again in 1966 but was only briefly held each time and never charged with any crime. It was not until May, 1972 that Hahn was successfully charged with war crimes by the Higher Regional Court of Hamburg. The now 65-year-old Hahn was found guilty in connection with wartime atrocities committed at the Pawiak prison in Warsaw. Hahn was sentenced to 12 years in prison in June, 1973 but petitioned the court for an appeal of the verdict. After a two year review of the trial and the evidence, Hahn's appeal was rejected by the West German judiciary and he entered prison in March, 1975. During the appeals process, Hahn was also on trial in a different West German court; this case surrounded his alleged role in the deportation of an estimated 230,000 Jews from the Warsaw Ghetto to Treblinka. The proceedings opened in October, 1974 and Hahn was again found guilty at trial. On 4 July 1975 Hahn was given a further sentence of life imprisonment. Suffering from cancer, Hahn was granted early release from prison in September, 1983. He died in Hamburg on 10 November 1986.