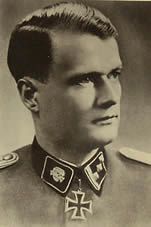 SS-Sturmbannführer (Major) Walter Reder (4 February 1915 - 26 April 1991) was a German Waffen-SS officer who served with the 3.SS-Panzer-Division Totenkopf and the 16.SS-Panzergrenadier-Division Reichsführer-SS. He was a Knight's Cross and German Cross in Gold winner. After the war he was convicted of war crimes in Italy. Walter Reder was born in Freiwaldau, Sudetenland, Austria-Hungary (now the Czech Republic).

A son of a manufacturer, he studied at Realgymnasium and attended business schools in Wien, Steyr, and Linz. Already a member of the Hitler Youth, Walter also joined the SS-Verfügungstruppe and in 1934 was assigned to the II.Sturmbann of SS-Standarte 1. After being granted German citizenship in December 1934, Reder was sent to the SS-Junkerschule at Braunschweig. He graduated 60th in his class and went on to command various elements of the 3rd Waffen-SS Totenkopf Division including the SS-Totenkopf-Standarte Oberbayern, (upper Bavaria) and SS-Totenkopf-Infanterie-Regiment 1 and 2.

Reder remained with the 3.SS-Panzer-Division Totenkopf throughout most of World War II. He participated in the invasion of Poland and the subsequent operations in the West where he received the Iron Cross 2nd. class. In the opening weeks of Operation Barbarossa, Reder commanded the 11.Company of SS-Totenkopf-Infanterie-Regiment 1, which spearheaded the German advance on Leningrad. During the bitter fighting near Chilkowo in September 1941, Reder was severely wounded in the neck, but recovered quickly and returned to his division just a month later. In March 1942, he was given command of the I.Battalion of the SS-Panzer-Grenadier-Regiment 5 Totenkopf, leading it for more than a year and also throughout the Third Battle of Kharkov.

On 9 March 1943, during the ferocious fighting near Dergatschi, south of Kharkiv, Reder was again severely wounded and a day later the lower portion of his left arm had to be amputated. For his exemplary leadership at Kharkiv, SS-Hauptsturmführer (Captain) Reder was on 3 April 1943 awarded the much coveted Ritterkreuz. Following his recovery, he returned to the battlefield and was posted to the SS-Panzer-Grenadier-Ausbildungs- und Ersatz-Battalion 3 in Warsaw, which had at that time the task of the liquidation of the Warsaw Ghetto. In December 1943, Reder was transferred to the newly formed 16.SS-Panzergrenadier-Division Reichsführer-SS. He remained with this division until May 1945 as a commander of the SS-Panzer-Aufklärungsabteilung 16 and SS-Panzer-Grenadier-Regiment 36. These units were given the task of anti-partisan warfare in Northern Italy and the former was largely responsible for the Marzabotto massacre; generally regarded as the worst wartime atrocity in Italy.

On Reder's direct orders the SS-Panzer-Aufklärungsabteilung 16 destroyed the village Marzabotto in reprisal for the local support given to the partisans and the resistance movement. During the week between 29 September and 5 October 1944, Reder's soldiers executed more 700 people including many children and women. In March 1945 the division withdrew to Hungary and later to Austria where Reder surrendered, together with the rest of the Reichsführer-SS to the British forces near Klagenfurt. Walter Reder was captured by U.S. troops and released soon after because of his war time wounds. However, he was rearrested by U.S. authorities in Salzburg, held at U.S. internment camp at Glasenbach and later transferred to British custody. In May 1948 he was extradited to Italy and tried by Italian military court in Bologna. In October 1951, Reder was sentenced to life imprisonment at Gaeta fortress prison, on the coast north of Naples, for ordering the destruction of Marzabotto and other villages near Bologna during the anti-partisan sweeps and for ordering the execution of Italian civilians in Tuscany and Emilia during the same period.

Former SS-Obersturmführer Ernst-Günther Krätschmer, author of Ritterkreuzträger der Waffen-SS, championed Reder's cause, forming Gaeta-Hilfe along with 5 other veterans in 1957. This aid society initiated petitions resulting in 280,000 letters by soldiers from 35 countries being sent to the Italian government urging Reder’s release. Reder expressed profound repentance in a December 1984 letter to the citizens of Marzabotto, was released from prison on 24 January 1985, and promptly relocated to Vienna. Soon after arriving there (and he was received with full military honours by the then-Minister of Defense of Austria), he was quick to retract his apology to the Italian people, stating explicitly that he had pronounced such words of apology solely to exploit a political opportunity. He died in Vienna, Austria in 1991 and is buried in Gmunden (Oberösterreich).