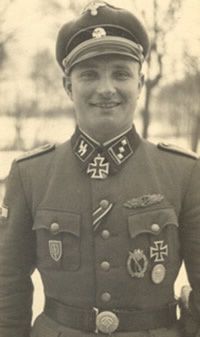 Roberts Ancāns was born on 11 November 1919, in Tilža parish, Latvia. In 1938 he started law studies in Latvian university. In the autumn 1939 he volunteered in Latvian army. Ancāns was member of Latvian student fraternity Lacuania. Ancāns was in the Latvian Army in 1940, and during the German invasion of the Soviet Union (Operation Barbarossa) he volunteered to join the first Latvian units in July 1941 and the Waffen SS in February 1942. He was among those Latvian soldiers who were trapped in Kholm Pocket in early 1942. There he was wounded and after treatment served in the Latvian Legion near Leningrad, in the Volchov marshes and at the Velikaya river. After the 19th Waffen Grenadier Division of the SS (2nd Latvian) was formed, he became part of the 19th Reserve Battalion. In the fighting of the Courland pocket on 24 December 1944, with his company of 180 men, they destroyed a Soviet attack aimed at the point where the 19th SS and the 21st Luftwaffe Field Division met, and they also destroyed 12 tanks in the process. After the 19th SS and the 21st Luftwaffe divisions had been withdrawn, Ancāns' company had been reduced to 38 men, most of them seriously wounded. For his bravery and leadership in the battle he was awarded the Knight's Cross. In May 1945, he was seriously wounded and evacuated from the pocket. Ancāns survived the war and until 1955 lived in West Germany, but then emigrated to the United States. He died in New York on 1 January 1982. The Latvian Legion's attachment to the SS, unit designations and ranks were considered a formality. Latvian and Estonian soldiers, regardless of whether they volunteered or were drafted, were not members of the Nazi party. In 1949-50, United States Displaced Persons Commission investigated the Estonian and Latvian "SS" and found these military units to be neither criminal nor Nazi collaborators. On 12 September 1950, Harry N. Rosenfield, the United Nations Refugee Relief Association commissioner, wrote to Jūlijs Feldmanis, Latvia's chargé d'affaires in Washington, saying that «the Waffen-SS units of the Baltic States (the Baltic Legions) are to be seen as units that stood apart and were different from the German SS in terms of goals, ideologies, operations and constitution, and the Commission does not, therefore, consider them to be a movement that is hostile to the government of the United States under Section 13 of the Displaced Persons Act, as amended.»